All the New Features Coming to Windows 10 Creators Update

Microsoft just held a major event for Windows 10 in New York City today, where the company made a bunch of major hardware and software announcements. The event itself was jam-packed with exciting new technology and feature updates, but perhaps the most exciting was the sneak peak into the next major update for Windows 10 dubbed “Creators Update.”

The Creators Update is scheduled to ship in early 2017, and it packs in a bunch of new features including a new emphasis on helping everyone create, share, and play around with 3D models. “We’re used to 2D emails, documents, spreadsheets and slides,” said head of Microsoft’s Windows and Devices group Terry Meyerson. “The next generation is growing up with 3D right from the start. Last month, I attended MineCon. I watched thousands of kids interacting with their 3D Minecraft world, editing their worlds as easily as we scroll through a document.”

The new update will basically make it easier for everyone create 3D objects and use them across all Microsoft products. In addition, there are several updates that will help people be more productive. There’s a lot to go over, so let’s just jump right in and start with something everyone is familiar with.

Microsoft Paint gets a major update 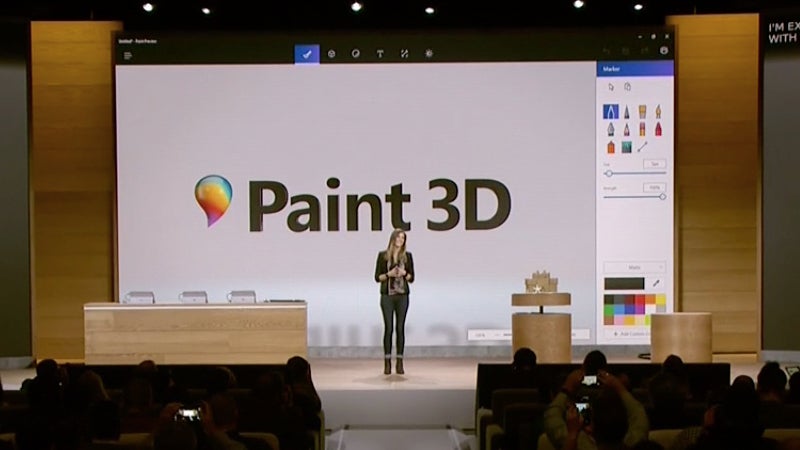 Microsoft Paint is getting a facelift. The biggest change you’ll notice is that it’s now called Paint 3D. The new software makes it easier to create 3D objects, environments, and other experiences.

“We need to make 3D creation as simple as taking a photo or video on your phone,” general manager at Microsoft Megan Saunders said. She lifted up her phone, walked toward a sandcastle sitting on stage, appeared to be taking a photo of it, then began walking around it holding her phone in place. It was clear from the display on her phone that she was 3D-scanning the object. 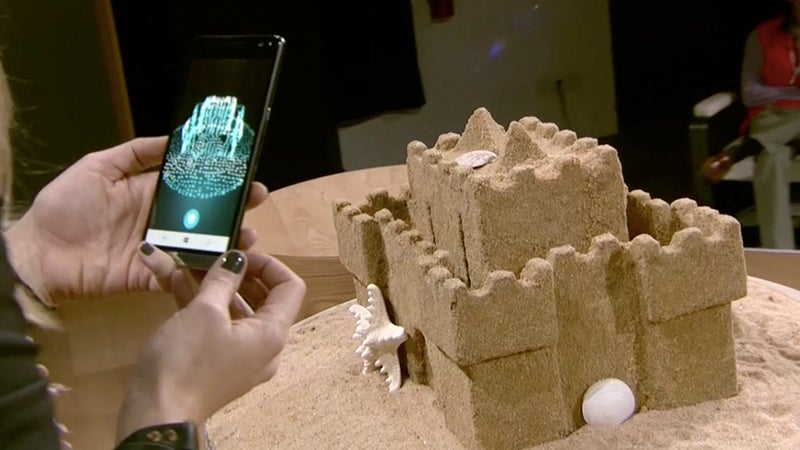 The sandcastle was recreated in 3D on her phone, and she was able to move it over to her computer and import it into Microsoft programs. She was also able to share it on a new site called Remix3D.com, created and maintained by Microsoft.

The site includes original creations from featured artists including some items that were made in Minecraft. You’ll also be able to 3D print objects straight from the community. SketchUp, one of the most popular pieces of 3D modelling software, will also be part of the community. You’ll be able to search, download, and share 3D models all from the website (which is free to use). 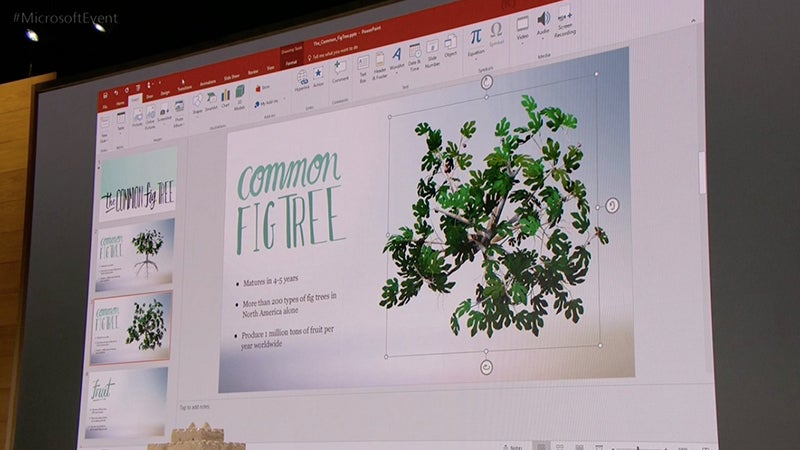 The update will also bring some major changes to Microsoft Powerpoint. You’ll still be able to see all of the classic options, but now there’s a new option to add a 3D model. You’ll be able to search from within the community of Remix3D.com, so your options are basically endless, and you’ll also be able to search your own 3D creations. You can add 3D models to a Powerpoint presentation the same way you’d add a photo or video today.

You can also rotate the 3D object within Powerpoint, which will save a lot of time for people that are perfectionists. Before this update, you’d have to go back to 3D modelling software, render your image exactly right, then save it as an individual file. Then you’d have to import the file into your Powerpoint and hope it’s perfect. If it wasn’t, you’d start back at the beginning. Now, after teh update, it will be as easy as dragging and dropping the object into place. 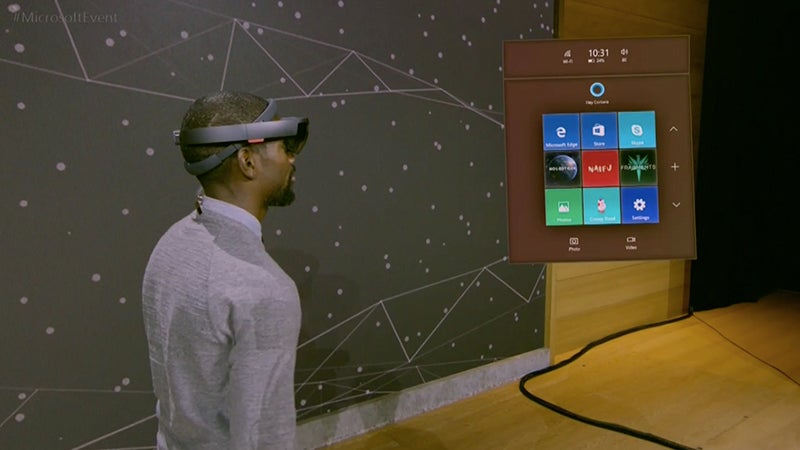 Microsoft’s ambitious augmented-reality headset, Hololens, is able to overlay digital images on the real world. Since it runs on Windows Holographic, built around the Windows 10 API, it can take advantage of the new features coming in the Creator’s Update. The demonstration at the press event today focused on looking at some of the 3D models that were created by in Paint3D, but that was only a small portion of what it will actually be able to do.

The more exciting announcement was a demonstration of how someone with Hololens will actually be able to preview furniture in their home using the AR headset and 3D models created by companies. In the example used on stage, one of the demonstrators dragged some chairs from a shopping page onto the stage to “preview” how they would look in the real world. This will obviously come in handy for anyone furniture or clothing shopping. 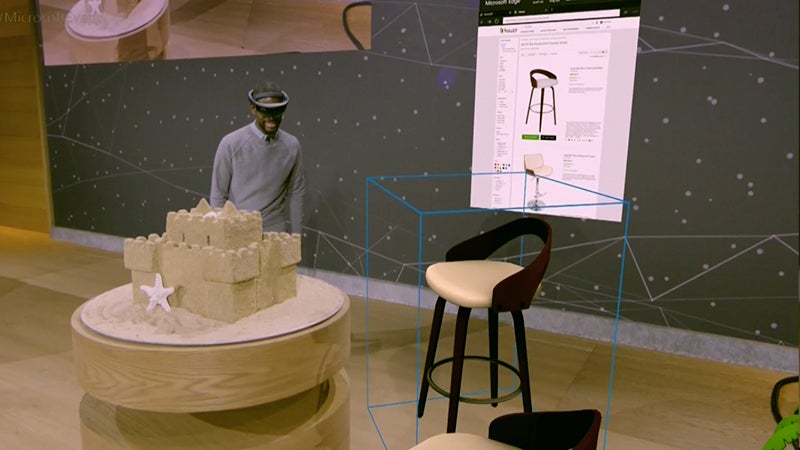 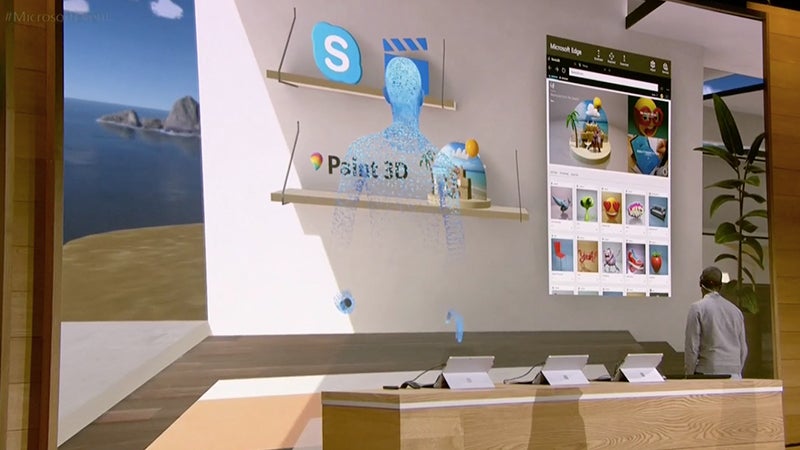 Another really interesting use of Hololens was a control room the presenter was able to step into that was running a bunch of different apps that the same time. This basically allowed the presenter to escape reality and interact with a digital apartment where a bunch of apps were running.

On one of the walls in the room, the demonstrator had a gigantic television playing a soccer match of his favourite team. The TV screen could actually be resized and even dragged over to another wall if he wanted. On another wall in the digital room was all the 3D models from Paint 3D sitting on a shelf. This was a great way to show off some of the 3D renderings he’d made earlier in the demonstration.

Microsoft also announced some new virtual reality headsets that will be compatible with Windows 10 and will be capable of rendering some of the 3D creations from Paint 3D and other Microsoft programs. Details of the VR headsets were scarce, but executives did mention that HP, Dell, Lenovo, Asus, and Acer will be launching them at a price of $299.

Microsoft’s demonstrators were quick to say that the headsets don’t require separate rooms, and they’re basically being marketed as Creators Update accessories. That basically means that if you want to get the most out of your 3D creations, you should probably get a headset so that you can truly experience them in full 3D (rather than just looking at them on your laptop screen).

Broadcasting with the Xbox One is easier

The Creators Update is also going to make it much easier to people to broadcast while they’re gaming. Microsoft is building Beam directly into Windows, so it will hopefully be much easier for gamers to start broadcasting.

As you may know if you’ve ever tried to broadcast a gaming session yourself, set up can be really difficult, and it’s actually one of the things that most often prevents people from starting their own streaming channel. Setting up a broadcast isn’t nearly as easy as it should be. Now, after the Creator’s Update, you’ll be able to just push a button and start broadcasting to the world. As you may or may not remember, Microsoft acquired Beam for a few months ago, so this news isn’t exactly that surprising. Windows 10 is also going to make it easier to set up tournaments using Arena on Xbox Live.

One of the last major updates announced at the press event was how much easier Windows 10 will make it to message family and friends straight from your desktop. You’ll be able to pin people’s faces (or profiles) to the task bar at the bottom of you screen. When you click on the person’s face, you’ll be able to send them messages, files, emails, and more. The profiles link out to anyone that is logged into Windows, and there will also be an option to relay SMS messages from Windows and Android phones. In many ways, this is similar to what Apple has had for years with iMessage, but it’s still a welcome addition for anyone that is constantly switching between devices.