An Enormous Cloud of Toxic Sulphur is Spreading Across Iraq

During a fierce battle for control of the Iraqi city of Mosul last week, Islamic state fighters set fire to a gigantic sulphur plant. Days later, a plume of sulphur dioxide continues to spread over surrounding areas, darkening skies and making the air toxic to breathe.

This isn’t the first time the Al-Mishraq sulphur mine and processing facility has caught fire: As NASA’s Earth Observatory points out, a similar disaster occurred more than a decade ago, in June 2003. That time, the fire raged for a month, releasing a total of 600 kilotonnes of sulphur dioxide and becoming the largest non-volcanic sulphur plume ever measured by satellites. 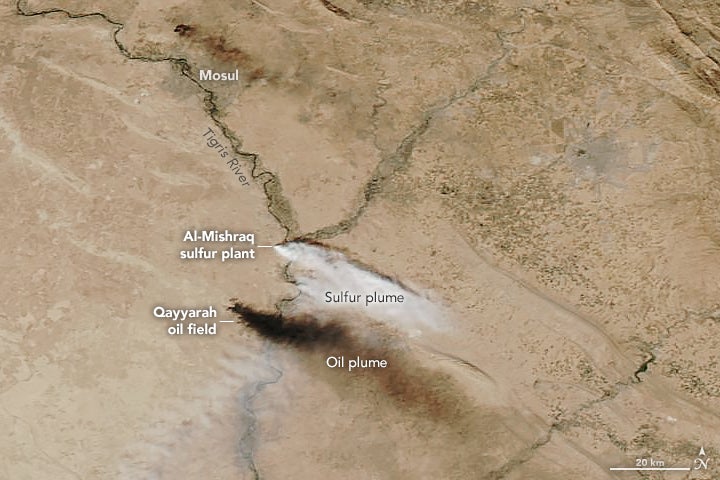 Black and white stripes over Iraq indicate a sulphur fire burning alongside oil field fires, some of which have been raging for months. Image: NASA Earth Observatory

Sulphur dioxide — the colourless, noxious gas that forms when sulphur is combusted — is not something you want to be around. At low levels of exposure, it causes eye and skin irritation and triggers respiratory problems. Even short-term exposure to high concentrations of the stuff can be life-threatening. Children may be especially vulnerable to its toxic effects, because they breathe more air compared to their body weight than adults do.

According to the Wall Street Journal, the blaze at the sulphur plant was in the process of being extinguished over the weekend. But the toxic plume from the incident continues to spread across northern and central Iraq, recently attaining a higher altitude that could allow it to be transported far and wide by strong atmospheric winds.

While bad news for the region as a whole, dissipation of the plume could offer some relief to residents of Mosul. Elevated sulphur dioxide levels have already been implicated in two deaths, and have caused up to a thousand more to fall sick. Over the longer term, high concentrations of sulphur dioxide can cause acid rain, stripping nutrients out of soil and contaminating local water supplies. [NASA Earth Observatory, Wall Street Journal]