Self-driving cars will probably make the world a better place—someday—when they eliminate the likelihood of injuries in crashes. Today, is not that day.

In its monthly report on self-driving car accidents published today, Google announced one of its autonomous vehicles was involved in a collision last month that was so bad, the human operator inside the vehicle was sent to the hospital. Of course, there was another, non-autonomous car involved in the crash who was found to be at fault. It’s still unclear what could have been done to avoid the crash, especially because a reckless human driver was involved.

No injuries were reported at the scene of the collision, but the operator did voluntarily check himself into the hospital and was eventually released after being evaluated by medical staff. 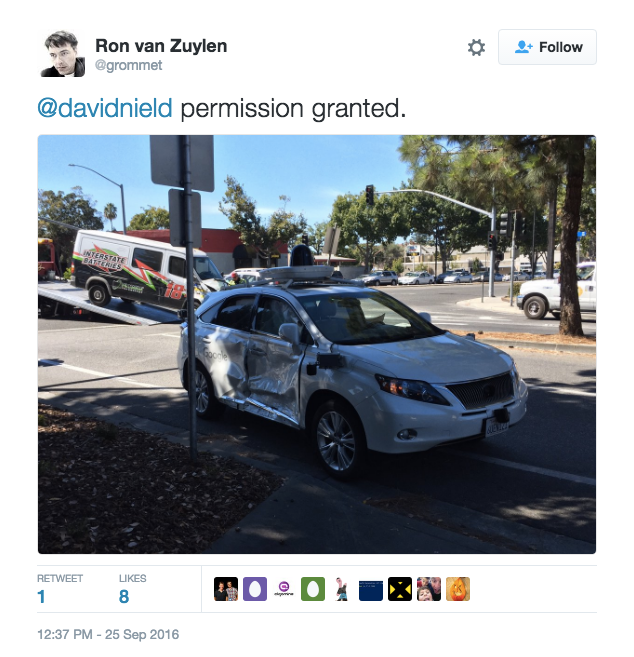 The self-driving car apparently identified that the van running a red light and applied the brakes. The operator sitting behind the driving wheel in the Google car also noticed the van and applied the brakes manually. Unfortunately, it wasn’t enough to prevent the crash. The commercial van ended up t-boning the Google car. The report released today says that Google’s car received “substantial damage” and as you can clearly see in photos of the incident, that would be an understatement.

In the past, Google has been able to make adjustments to the vehicle to make up for weird human behaviour. One example is how Google cars learned it was safer to drive slightly above the speed limit because that’s what human drivers do. In this most recent crash, the fix isn’t nearly as obvious.

Although Google’s car wasn’t at fault in this particular collision, we still don’t know if it’s incapable of causing problems on the road. Earlier this year, Google’s self-driving car was in its first at-fault crash when it collided with a bus. To the car’s credit, the crash was much less severe and incurred way less damage than the t-boning incident. Coincidentally, both collisions happened on El Camino Real, a famous 600-mile road in California.

We’re still hopeful that self-driving cars will someday save a lot of lives and prevent car accidents, but until we can get stupid human drivers off the road, it’s going to be very difficult.