On Wednesday, the European Space Agency attempted to land a probe on Mars, and things went badly. While the ExoMars mission team continues to piece together why its Schiaparelli lander lost contact with the Earth, NASA has now obtained photographic evidence of what appears to be a crash-landing.

A new image of Schiaparelli’s intended landing site, captured by the Mars Reconnaissance Orbiter’s Context Camera on October 20th, shows several surface features that seem related to the wayward lander. According to a statement issued by ESA today, the bright spot in the southeast corner of the boxed area above is interpreted to be Schiaparelli’s parachute, while the darker, fuzzy splotch less than a mile north is probably an impact site “following a much longer free fall than planned, after the thrusters were switched off prematurely.” 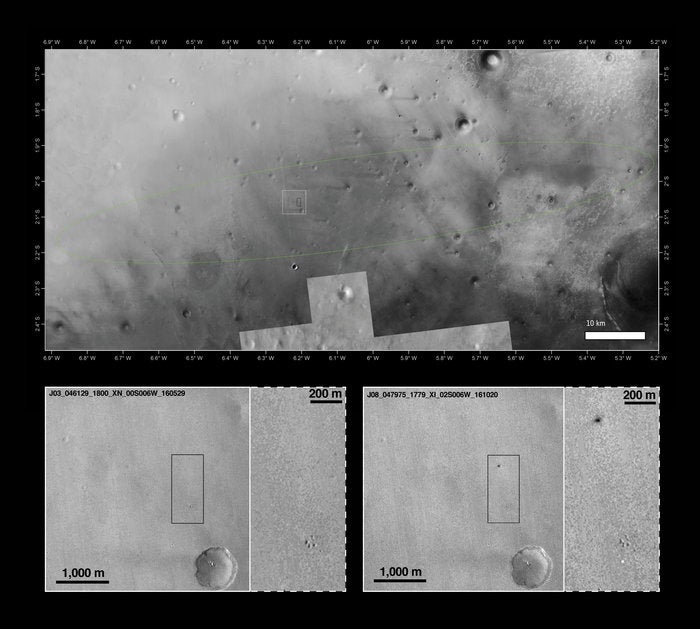 The landing site of Schiaparelli is within the predicted landing ellipse in these images captured by NASA’s Mars Reconnaissance Orbiter. Image: NASA/JPL-Caltech/MSSS, Arizona State University

The ESA now estimates that Schiaparelli entered free fall some 1.25 to 2.5 miles (2 to 4 km) above the surface, at a velocity greater than 180 mph (300 kph), which would certainly explain why the Red Planet has a strange new burn mark. The team expects to have a more complete picture of what went wrong in a few days, after data from ExoMars’ Trace Gas Orbiter, the Giant Metrewave Radio Telescope, and ESA’s Mars Express satellite is fully analysed.

Jet Propulsion Laboratory spokesperson Guy Webster told Gizmodo that the MRO will have an opportunity to capture a much better image of the lander’s remains next week, when it makes another pass with its Hi-RISE camera. [ESA, NASA]