Now Trending on Facebook: Take Away Women’s Right to Vote

Facebook’s trending topics suggested women shouldn’t have the right to vote. The social network allowed the hashtag #RepealThe19th to be shown in its trending news column on Thursday. Taken at face value, the hashtag suggests that the idea of repealing of women’s right to vote is popular. 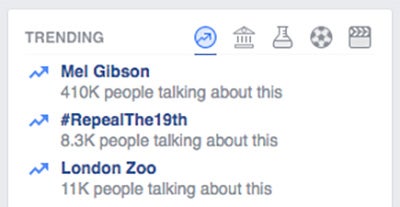 Any pedestrian Facebook user might be shocked at seeing the hashtag sandwiched between Mel Gibson and the London Zoo. Clicking on the link, however, shows that the story was actually pretty complicated. The #RepealThe19th hashtag was created yesterday by Donald Trump supporters after Nate Silver published an electoral map on FiveThirtyEight that projects how Trump would win the election if only men voted.

Trump supporters apparently saw this as a legitimate path to victory, and started calling for the 19th amendment to be revoked by using the hashtag #RepealThe19th. They responded directly to the electoral map created by Nate Silver and FiveThirtyEight. Some also lashed out against anyone who challenged the idea of marching back decades worth of progress for women’s rights.

The 19th Amendment granted women the right to vote in the US and was ratified in 1920. The amendment marked an important milestone in the feminist movement, and enshrined into law the fact that women should be treated equally to men. But even in the 21st century, there’s still plenty of work to be done. In 2015, a full-time female worker still makes only 80 cents to every dollar earned by men. And so it should come as no surprise that Trump’s supporters were not well received by women.

The FiveThirtyEight article also showed that Hillary Clinton would beat Trump by almost 400 electoral votes if only women voted, which added to the inflammatory nature of the stats being shown. This fuelled the hostility of Trump supporters. Eventually, after hours of being used by pro-Trump supporters, the hashtag was flooded with pro-feminist photos, videos, and tweets declaring that the proposition was absolutely crazy. The pro-feminist that took to Twitter mostly encouraged women to vote on November 8th.

Notably, the #RepealThe19th hashtag wasn’t showing up in the trending topics section on Twitter when it was at the top of the list on Facebook. (The hashtag originated on Twitter.) It’s unclear if this is a difference in the algorithms that run the modules, the moderation that’s offered to them, or simply, a reflection of what people are talking about on the respective platforms. 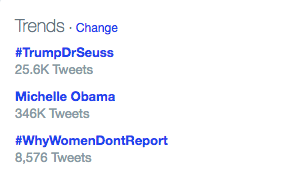 Regardless, millions upon millions of Americans are seeing #RepealThe19th as Facebook reminds them to vote and as they look at pictures of their friends. We’ve known that Facebook’s trending news section has been a mess lately. This just feels dangerous.

We’ve reached out to Facebook to learn more about how the hashtag ended up being promoted and will update this post when we hear back.