The only good to come out of the Samsung’s Galaxy Note 7 nightmare was a clever Grand Theft Auto mod which replaced the game’s sticky bomb with The Phone That Explodes. Our article on the initial video ended with a challenge: Your move, Samsung. We didn’t expect them to take that literally. 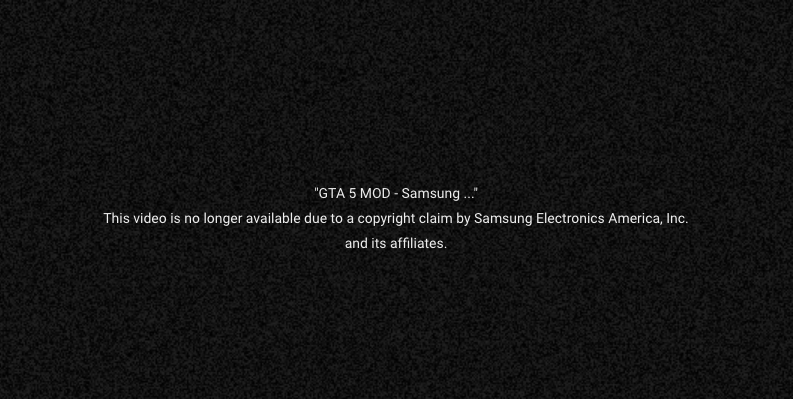 As indicated by the screenshot above, Samsung issued a copyright claim on the video, despite having no ownership over the game or the mod. Is it possible Samsung has no idea how copyright works? Or parody for that matter? Because issuing a takedown of this GTA mod video is a clear misuse of YouTube’s DMCA tool which unfortunately is designed to favour the claimant rather than the uploader. As a whole, DMCA is considered to be a mess.

Abuse of DMCA (on YouTube and elsewhere) is widespread, and Samsung are far from the first to attempt to silence criticism thought it—not to mention that copyright claims are a huge bottleneck in the YouTube architecture. Earlier this year Google, the parent company of YouTube, said it handles about 75 million copyright requests each month.

It’s not known if the original uploader has attempted to fight back against Samsung’s garbage claim. Strangely though, Samsung have chosen not to go after the mod itself—which is still available for download—or the many other users who have uploaded footage of the mod. We’ve quite a few below for your viewing pleasure.

Better luck next time, Samsung. [TechDirt via The Verge]