Heroic Plants Are Working Overtime to Gobble Up Our Carbon Emissions

It isn’t enough to halt global warming, but carbon-hungry plants are helping impede the buildup of CO2 in our atmosphere to a measurable degree, a new study has found. While this is a good thing and you should go thank a tree right now, the effect is probably temporary, speaking to how damn complicated our planet’s response to climate change is going to be.

The amount of carbon in the atmosphere is increasing every year. But while the growth rate of atmospheric CO2 climbed steadily throughout the late 20th century, between 2002 and 2014 it held flat at approximately 1.9 parts per million per year. This observation is difficult to square with the fact that humans are pumping more carbon into the air now than ever before.

When Trevor Keenan, a researcher at Berkeley Lab’s Climate and Ecosystems Division, discovered the growth rate pause while analysing data from the Global Carbon Project last year, he realised there must be a missing carbon sink. Furthermore, he recognised that the missing sink wasn’t in the ocean, which has been soaking up carbon at a well-measured rate over the last few decades. 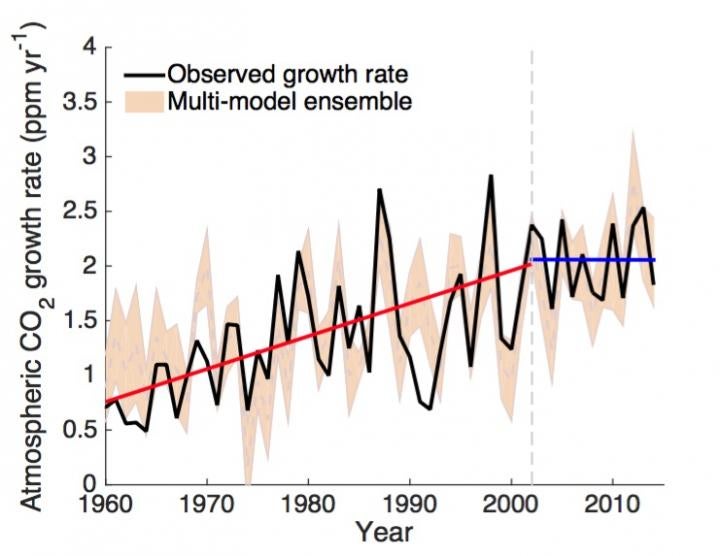 Changes in the growth rate of atmospheric CO2, with the recent ‘pause’ highlighted in blue. Image: Berkeley Lab

But on the land, climate conditions are much more variable from year to year. And changes in temperature and rainfall directly impact the amount of carbon plants draw down from the atmosphere and release back.

“We realised the land sink was increasing,” Keenan told Gizmodo. “We didn’t know where, or why.”

Seeking answers, Keenan and his colleagues combined computer models of Earth’s carbon cycle with thirty years of satellite data on land-based vegetation, in addition to data from research towers that measure the amount of CO2 and water entering and leaving forests at their canopies.

This analysis, which is published today in Nature Communications, zeroed in on two factors responsible for the apparent slowdown in atmospheric CO2 buildup. One, plants drawing down more carbon for photosynthesis. Two, plants burning less carbon for fuel. (Like humans, plants eat carbon-based sugars, and “respire” some of the energy back to the atmosphere as CO2.)

“It’s quite likely this is a temporary pause in the growth rate of CO2.”

Greater carbon uptake in a carbon-loaded atmosphere is something ecologists have been discussing for a while. They’ve even given it a fancy name: the “CO2 fertilisation effect.” Countering this effect is the respiration of CO2, which tends to increase for plants as temperatures rise.

But between 2002 and 2014, temperatures over the land didn’t rise as fast as they had been rising before. This, Keenan and his co-authors argue, is key.

“A lack of warming meant there wasn’t as much CO2 going into the atmosphere [from plants],” Keenan explained. “Meanwhile, we had CO2 in the atmosphere going up, causing a fertilisation effect.”

It’s an elegant solution to what, for Keenan and many others, was a vexing planet-wide mystery. “I think this is an excellent analysis, and will be very thought-provoking,” David Schimel, an Earth scientist at the Jet Propulsion Laboratory who was not involved with the study, told Gizmodo.

But as Keenan and others emphasise, we cannot expect plants to eat enough extra carbon enough to save our collective assess. In fact, given our recent string of record-smashingly hot months, it’s possible Keenan’s newly-identified carbon sink has already started to disappear.

Schimel agrees. “The terrestrial uptake was caused, probably, by increasing CO2, but was aided by the slower growth rate of temperature over ten years or so (the so-called “pause”),” he wrote in an email. “Since the pause had ended, we’d expect to see the more rapid growth of biospheric uptake stop.”

Of course, any research highlighting the voracious CO2 appetite of Earth’s vegetation reminds us that restoring forests is one of the best strategies we have for offsetting carbon emissions. Under the Paris climate agreement, many nations have pledged to reduce their carbon footprints by doing exactly that.

But at the end of the day, there’s only one thing that’s going to save us from the worst consequences of climate change—and that’s to kick the fossil fuel habit entirely. [Nature Communications]