British red squirrels are being afflicted by a medieval strain of leprosy that was thought to have disappeared from Europe over 700 years ago, according to a new DNA analysis. Researchers say the chances of the dreaded disease spreading to humans is low, but the discovery suggests this strain of leprosy has been lingering for quite some time.

A DNA analysis performed by researchers from the University of Edinburgh and the Swiss Federal Institute of Technology in Lausanne (EPFL) has shown that leprosy in Britain’s red squirrels is being caused by the same species of bacteria responsible for human infections. Human cases of leprosy are practically unheard of in Britain, but scientists say the red squirrels could be a source for the bacteria in the UK, frustrating attempts to eradicate the disease.

Published in the journal Science, results show that samples taken from 25 red squirrels living on Brownsea Island (off of England’s south coast) were infected with Mycobacterium leprae — the variant of leprosy responsible for outbreaks in medieval Europe. The bacteria is very similar to a strain found in the skeletal remains of a leprosy victim buried in Winchester 740 years ago. It’s also quite similar to a strain found in armadillos in the southern United States. 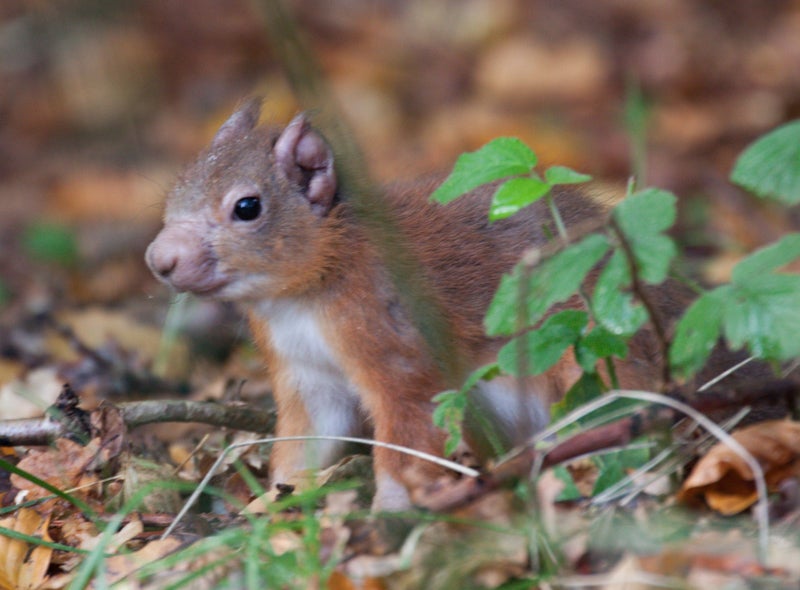 Leprosy is a chronic infectious disease that affects the peripheral nerves, skin, upper respiratory tract, eyes, and the lining of the nose. Once rampant in Europe, the disease declined by the end of the Middle Ages for reasons that still aren’t fully understood. Leprosy in Europe disappeared about a century ago, at least among humans. Today, about 200,000 cases of leprosy are recorded each year around the world, particularly in wet areas in the tropics and subtropics. Countries with the highest prevalence include India, Indonesia, Myanmar, Brazil, and Nigeria. Leprosy can be treated with antibiotics, but the surprising number of new cases each year highlights the need to learn more about this disease and why it’s so tough to stamp out.

Like so many other zoonotic diseases, leprosy can “jump” from animals to humans. With this in mind, the labs of Stewart Cole at EPFL and Anna Meredith at the University of Edinburgh conducted tests on 110 British red squirrels from England, Scotland, and Ireland. Some of these specimens showed signs of leprosy (e.g. hair loss on the ears, muzzle, and feet), while others did not — but most were infected with leprosy bacteria.

“It was completely unexpected to see that centuries after its elimination from humans in the UK, Mycobacterium leprae causes disease in red squirrels,” noted Cole in a statement. “This has never been observed before.”

“The risk to people from squirrel leprosy is negligible.”

This research shows that a pathogen can remain undetected in the environment even hundreds of years after it has disappeared from the human population. Thankfully, residents living in the UK have very little to worry about.

“The risk to people from squirrel leprosy is negligible,” Meredith told Gizmodo. “The bacteria that cause leprosy cannot survive outside the body and evidence shows that 95 percent of all people are naturally unable to get leprosy, even if they are exposed to the bacteria that causes it.” She says it’s sensible to take precautions, like avoiding physical contact with wild animals and washing hands before eating.

“Around a dozen people are treated for leprosy in the UK each year,” said Meredith. “In all cases, the disease was contracted in countries where leprosy is prevalent. The last recorded case of indigenous leprosy [i.e. contracted in the UK] dates from 1798.”

This news comes at a particularly challenging time for the British red squirrel. Their numbers have drastically declined in the UK over the past few years, and only 140,00 remain. These creatures are being threatened from habitat loss and the squirrelpox virus carried by invasive grey squirrels.

“The discovery of leprosy in red squirrels is worrying from a conservation perspective,” said Meredith. “We need to understand how and why the disease is acquired and transmitted among red squirrels so that we can better manage the disease in this iconic species.” [Science]