At an auction held earlier yesterday in the United Kingdom, a 95-per-cent-complete skeleton of an extinct dodo bird that was painstakingly assembled over the course of 40 years has sold to an unnamed private collector for a whopping £346,300.

Aside from maybe the passenger pigeon, no other animal is more closely associated to extinction than the dodo bird. It comes as little surprise that a collector was willing to hand over nearly a half million dollars to acquire the first dodo skeleton to come up for sale in nearly 100 years. 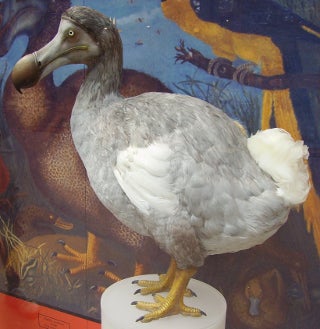 The rare skeleton was assembled by a man who started buying bones from private collections and auctions in the 1970s. Realising he had enough bones to put a skeleton together, the collector was able to construct the 95-per-cent-complete bird. He eventually decided to sell the item, which fetched a hammer price of £280,000—bumped to £346,300 when adding the buyers’ premium, which covers the auctioneer expenses—at Summers Place Auctions in Billingshurst, West Sussex.

An auction house spokesperson told the Guardian that there are only about 12 similarly complete skeletons in the world, all of which are in museums. It’s not known who purchased the skeleton, or whether it will ever be put on public display. It would be a real travesty if this exquisite item becomes somebody’s private conversation piece.

Dodos, which went extinct in the late 17th century, were a species of flightless birds that lived on the island of Mauritius off the east coast of Africa. Standing nearly 3 feet tall (1 metre), and closely related to pigeons, they were the first species known to have gone extinct because of humans. [Guardian]