We Talked to the Guy Whose Boosted Board Blew Up

On Wednesday, web developer Rick Bross was faced an unusual problem. His electric skateboard’s battery malfunctioned, filling his entire apartment with smoke and scaring the hell out of his roommate. The incident was just one of two recent cases involving Boosted Boards, a brand of electric skateboards, where the batteries spontaneously “vented”, a non-technical term used by the company to describe an electrical engineering problem also known as thermal runaway that causes batteries to overheat and potentially explode.

Later that day, Boosted Boards issued a warning to all of its customers, urging them to discontinue use of the second-generation Boosted Boards and to stop charging the batteries for the time being:

On two separate occasions, a lithium battery cell has vented inside the battery pack of the 2nd generation Boosted board. The battery enclosure is a fire-retardant composite and worked as designed to contain the cell failure. Fortunately, no one was injured and no property was damaged. Our engineering team is conducting a thorough investigation and we will update everyone with the results.

We strongly urge all riders with 2nd generation boards to stop riding and stop charging them. Instead, please store them away from anything flammable until we complete our investigation. If you don’t have a convenient place to store your board, you may optionally remove the battery. These are precautions we recommend to ensure rider and home safety. We will also stop shipping boards to new riders.

Now, Rick Bross is telling his story in the hopes that it will prevent any serious damage from being incurred and help get the issue resolved faster. It’s just the latest cautionary tale about the danger that batteries can pose even when used properly—and how electric vehicles can quickly turn into a nightmare.

Electric skateboards like the Boosted Boards make up just small fraction of a rapidly increasing trend of electrically-powered vehicles that include bikes, skateboards, hover boards, scooters, and more. These vehicles are typically powered by large batteries which can incur more damage than ones in much smaller gadgets. The problem is, if these gigantic batteries begin to experience thermal runaway, the batteries can quickly overheat, causing them to spew toxic gases, or worse, start on fire.

Gizmodo spoke to Bross one day after his Boosted Board started smoking to learn more about exactly what happened and how it was handled by the company. We also reached out to Boosted Boards, who declined to comment on the incident. From Bross’s perspective, the story is utterly insane, and the incident eventually landed him a visit from Boosted Board’s founder Sanjay Dastoor in his New York City apartment.

The saga starts with a weird text he received from his roommate in the middle of the day: 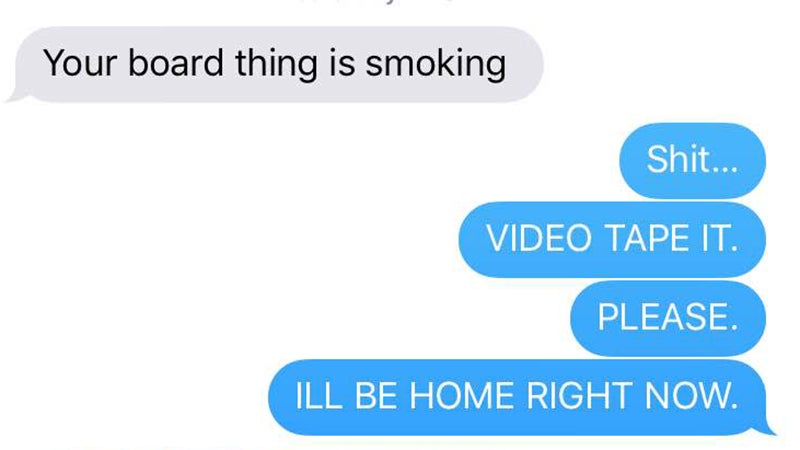 “I was at work, and I got a text from my roommate saying the apartment was filled with smoke, and the Boosted Board was melting,” he told Gizmodo. “My roommate told me it released enough gas to block visibility and that he couldn’t see across the room after it happened.”

Bross called his roommate and told him where the battery was on the board (near the front wheel) and instructed him to take the board outside and place it on the sidewalk. He assured his roommate the board would stop spitting smoke in just a few seconds, told him the enclosure was fire-retardant and that it shouldn’t catch fire.

He also encouraged his roommate to take the Boosted Board back inside the apartment until he could get home from the office because, as Bross explains, “it would basically be like leaving £1,200 on the sidewalk.” He left his office and rushed home only to find the board outside on the sidewalk — thankfully unharmed (and even better, not stolen). He then entered the apartment to assess the damage.

“You couldn’t see smoke inside the house, but you could smell it,” Bross told Gizmodo about the aftermath. “It smelt of chemicals (lithium) and melting plastic, like if you melted a plastic pot handle on the stove, but much more intense. The smell penetrated all six units of my three-floor apartment building.”

Bross had a gas mask he bought as a joke in college, and decided to put it to good use. “I wore a gas mask for about three hours after getting home,” Bross said. “I didn’t want to breathe the lithium or whatever was in the oil-based plastic.”

Before jetting out of his office to rescue his apartment (and the board), Bross posted to the Boosted Board Reddit page. He has since removed the original post and replaced it with a second one, saying he deleted the original because of the “unfair impact it could have on the company”.

Bross is a Boosted Boards fanatic. He’s an active member across all of the Boosted Board forums and loves the product. In perhaps his greatest show of dedication to the company, Bross organised several group rides with dozens of electric skateboarders through his Boosted Board Riders (NYC Area) club, which has a couple of hundred members.

He says he couldn’t help but immediately report his issue to the community, which he’s an active member of and feels a deep connection to, when he first received the news. He was hoping he could get more information from other riders and hopefully give them a heads up that something weird was going on. He also sent an email to Boosted Boards customer service.

“They got back to me instantly,” Bross told Gizmodo. “They confirmed my address in about a day and sent shipping labels to have it replaced.” Bross also received a message from Boosted Board founder Sanjay Dastoor, who said he was going to come out and swap the board. The only thing Dastoor asked was that Bross save the board and the battery so that his engineers could run forensics on exactly what went wrong.

The company’s founder eventually visited Bross’s apartment in New York. According to Bross, Dastoor left San Francisco the same day the incident occurred, on Wednesday, but due to plane delays arrived on Thursday at 2:30am ET. He asked to meet Bross as soon as possible, who says, “I understood how valuable time was and that he was probably going to be up all night as well, so I stayed up and waited for him.”

The two met in the early hours of the morning at Bross’ apartment, and after inspecting the board together, Dastoor confiscated the battery and board, promising to replace it. The company has promised to rush a new board to Bross while they investigate the one that started smoking in the house.

For now, the company isn’t saying much, but it has apparently discovered enough in its internal investigation to encourage second-generation Boosted Board owners to stop using the product. When asked for more details, a company spokesperson said, “There is no additional information to share beyond the blog post at this time.” Bross doesn’t mind. He still loves the company and plans to continue riding electric skateboards.

“Even after this immense amount of anxiety, Boosted is a company I still love,” Bross told Gizmodo. “I respect their customer support so much, and every minute I spend on a Boosted Board... it just feels like being a god. You just fly around on this plane and you can go anywhere you want. It’s easily the fastest way to get around New York City.”

So a spontaneous combustion that could have ended horrifically ended up turning out to be okay, at least for the time being. We’re still waiting to hear back from Boosted Boards about exactly what’s going on with the second-generation boards, and the company taking questions from the press.

Boosted Boards declined our repeated request for interview and told us we’d be updated as soon as they know more. Until then, we’d recommend everyone stop charging their second-generation Boosted Boards.