What Arrival Gets Right About Talking to Superintelligent Noisesquids From Space

It’s difficult for linguists to explain to people we meet what it is that we do, and why we are so fascinated with it. Finally, popular culture is giving us a reference point. Arrival doesn’t assume we’ll be able to communicate with aliens with some advanced technology that makes no sense. Instead, it explores how that kind of “universal translator” could come to be in the first place.

But before my Tinder dates switch their openers from “how many languages do you speak?” to blowing ink rings in my face, I’d like to examine linguistics as portrayed by Arrival and how it relates to our work.

In Arrival, linguist Louise Banks (Amy Adams) is in a fieldwork situation—she is presented with an alien language, documents it and uses her data to further linguistic theory (with a sweet book deal).

Linguistic fieldwork is unique because for the most part, documentation linguists use the same tools in the field while working on any of the 7000-ish living languages, before the majority of them inevitably perish. Thankfully for Louise, that methodology can also apply to the ink-ring language squirted by giant superintelligent noisesquids who arrive on Earth in massive shell-like UFOs.

The early stages of data collection show common frustrations in the field: the aliens (“heptapods”) can’t tell whether Louise is trying to talk about herself or humans generally until she and colleague Ian dramatically rip off their hazmat suits and repeatedly shout their names, Pokémon style.

By this point, everyone has given up on the spoken language in favor of the writing system, and Ian gives the speakers nicknames so that he doesn’t have to use their language. Both are big linguistics no-no’s. (Writing is seen by linguists as secondary to speech as most languages have no written tradition and children do not pick up writing without instruction. Ian’s nicknames are disrespectful to the subjects; there are situations on Earth where naming conventions are incompatible with languages studied, but in cases like these the linguist would be the one to adopt a new name. For example, most foreign linguists in Taiwan adopt Chinese names.)

Louise’s methodology is inspired by a series of daydreams about playing with her child, including familiar tricks like the use of illustrated children’s books. While this arc looks like the tired “female lead is baby-crazy” trope, the comparison between a baby trying to learn its mother’s language and Louise trying to understand the heptapods really shows what a monumental feat language acquisition is. This is why linguists do this.

Halfway through the film, the linguistics plot becomes secondary to the political/sci-fi drama, which is understandable as I’m the only audience member who would have stayed for 116 minutes of “okay say the word for ‘tentacle’ again, now say it three times, is this the same whirling sound from ‘spaceship’, can you speak closer to the mic please…”

When the film goes full Dan Brown and starts measuring the negative space between ink blots, it leaves the scope of what I can criticise through linguistic knowledge. And in true academic fashion, even living my pipe dream of saving the world through research does not net Louise a promotion.

I’m the only audience member who would have stayed for 116 minutes of “okay say the word for ‘tentacle’ again, now say it three times, is this the same whirling sound from ‘spaceship’, can you speak closer to the mic please…”

Arrival had an impressive number of details that made Louise look and act like a real linguist. For starters, her office has a shelf dedicated to yellowing print copies of Language and a good number of the iconic Cambridge Textbooks in Linguistics series scattered about. (On the other hand, she teaches out of a cereal box that says ‘Linguistics’ on it, and her lecture on Portuguese is the type that is better off interrupted by an alien invasion.) There are a few shots of Praat, the tool of choice for anyone analysing sound. In true fieldwork fashion, there is a bird that refuses to stop tweeting the entire time Louise is trying to work. Louise may have made up a story about the word “kangaroo” being an Australian word for “I don’t know,” but it mirrors a common explanation of the ethnic slur “gook”, where Americans misinterpreted the Korean word for America, “miguk” as “me gook”. (Col. Weber, played by Forest Whitaker, throws in a racist quip about Australian Aborigines to make up for it.)

What really disappointed me about Arrival’s linguistics was Louise’s abandonment of the heptapods’ spoken language. Since all languages are spoken but most have no written tradition, linguists traditionally focus on speech and see writing as secondary. The opening of the film mentions some logistical questions posed by the heptapod speech: Louise asks whether the heptapods have mouths, and can’t tell whether one or both of the heptapods were speaking at once on the recording, both questions unanswered. To her credit, I mistook the dramatic background music for heptapod speech on more than one occasion. However, the spoken heptapod language is worth examining. Throughout the film I isolated four speech sounds used by the heptapods:

For comparison, the human languages with the smallest (reported) phonological inventories are Pirahã (10) and Central Rotokas (11). Languages with smaller inventories generally have to make up for the lack of contrast with longer words. For example, Cantonese contrasts 6-7 tones and has a lot of one-syllable words. In Mandarin, which contrasts 4 tones, these same words have been adapted into two-syllable words because otherwise too many words would sound the same. If the four heptapod speech sounds are all contrastive (perhaps the trill and the lawnmower are a single phoneme), we would expect heptapod words to be much longer or more complex than what we hear in Arrival.

While Louise has a more optimistic view of the heptopods than her military hosts, actual linguistic fieldwork seeks to not disrupt the communities it examines, let alone exploit the power structure between researcher and subject.

The heptapod language is also typologically strange given that it only has one stop, the [q], which I only heard once in the film. Stops, sounds like p, t, k, etc. are found in all spoken languages on Earth, and for good reason. Since our speech involves manipulating airflow, the simplest way to do so is to stop the airflow. Children master stops before more complicated speech sounds such as fricatives f, s, approximants l, r, etc. Given that the speech sounds of the heptapods also involve airflow (the trills are a giveaway), their sound inventories should mirror ours in the distribution of manners of articulation. 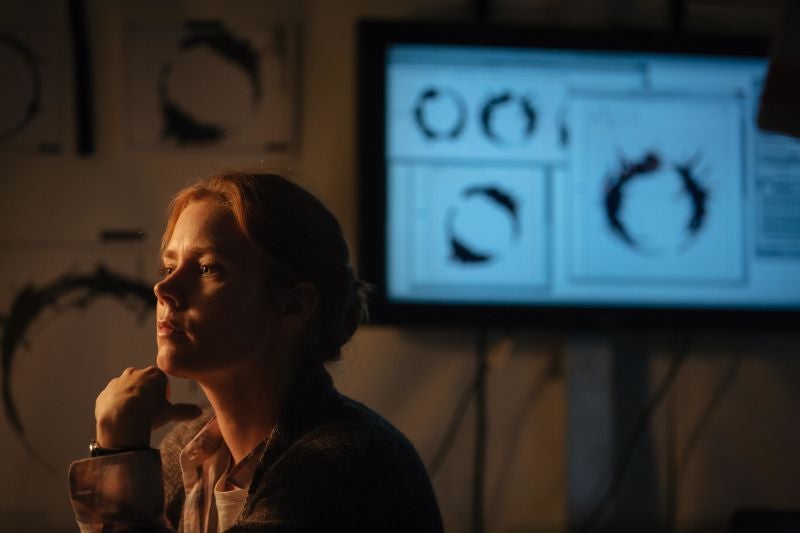 The film does provide some analysis of the heptapod language’s syntax, but this analysis does not match what we are shown. The heptapod writing system was described as non-linear, in that full phrases were presented all at once with no correspondence between sound and symbol. However, the black ink rings used by the heptapods were shown to be broken down into smaller components arranged counter-clockwise. Additionally, during the first and last elicitation sessions, the heptapods present sets of ink rings in sequences. To deem the writing system unrelated to the spoken language on this basis is a very odd statement for Louise, who speaks fluent Chinese. It was interesting to see a writing system adapted to the needs of its users however, and reminded me of the Brahmic scripts that became more “curly” as they spread to areas that wrote on leaves, to avoid breaking the leaves with straight lines.

Hopefully Arrival’s viewers realise that language documentation looks less like an interrogation and more like me chatting with old people and eating their sweet potatoes.

A more general issue in viewing linguistics through Arrival’s portrayal is the nature of Louise’s subjects. In Louise’s pre-Arrival work as a Farsi interpreter as well as with the heptopods, the purpose of her work is not to advance linguistic knowledge but to interrogate political threats. While Louise has a more optimistic view of the heptopods than her military hosts, actual linguistic fieldwork seeks to not disrupt the communities it examines, let alone exploit the power structure between researcher and subject. Although Arrival’s alien contact situation rightfully draws the suspicion of her colleagues, Louise’s politically-charged fieldwork bears an unfortunate resemblance to the missionary-based language documentation of yore. (Although missionary groups like SIL still exist, they have given up Bible translation as their primary goal.)

Hopefully Arrival’s viewers realise that language documentation looks less like an interrogation and more like me chatting with old people and eating their sweet potatoes.

Some aspects of the film’s treatment of linguistics were either misguided or stood in stark contrast to how linguists operate. The biggest is the mention of the Sapir-Whorf hypothesis, a claim that the properties of one’s language shape how we see the world. This idea was popularised in the 1940’s when linguist Benjamin Whorf started frothing over the verb tense system of Hopi, and how (despite it being pretty NBD by current typological standards) it was proof that the Native Americans were some sort of mystical timelords. I’ve seen my peers fuming about this, and I too don’t want this to be the cool science thing that non-linguist viewers google and throw around at dinner parties, but also this movie is literally about mystical timelords.

I’ve seen my peers fuming about this, and I too don’t want this to be the cool science thing that non-linguist viewers google and throw around at dinner parties.

It’s not a perfect match, in that Sapir-Whorf is more about the effects of specific languages on otherwise-identical people, and Louise is more using the heptapod language as a lens into their culture. What is described as Sapir-Whorf in Arrival is closer to the real differences languages have that are based on the cultures and environments in which they are spoken (for example, availability of plant/animal names, systems of formality, etc.).

Trying to bridge the gap between science and popular media will always have flaws. This is necessarily the case: inherent in science is that everything currently happening in the field is at the very edge of human knowledge. We don’t pick our favourite chapter of an undergrad textbook and contently live out our days in it. If it were that easy to relate to the findings of current research in a meaningful way, then we wouldn’t need years of grad school to participate.

Arrival let me vicariously live the dream of having my work validated as important, relatable, and worthy of an office larger than my bedroom. Unfortunately, I am still grappling with each of these, and am not a timelord. Arrival wasn’t a play-by-play of documentation linguistics, but it fills in the hole left by any sci-fi with a “universal translator” function, and gives me a pretty okay icebreaker.

Ben Macaulay is working on a PhD in Linguistics, with a focus on phonology and language documentation. His current project is documenting the Pazeh language from its last speaker.