Why This Week's Fukushima Earthquake Was an Aftershock From 2011

When a magnitude 6.9 earthquake rocked the Fukushima prefecture of Japan on Tuesday, fear swept the island nation that it could herald a repeat of the tsunami and nuclear disaster at Fukushima five years ago, both of which were caused by an enormous, magnitude 9.1 earthquake.

Mercifully, Japan was spared this time around. But the two earthquakes at Fukushima are, in fact, connected. According to geologists, today’s quake was an aftershock of the Tōhoku mega-quake in 2011, and there could be more aftershocks to come.

“It’s not unusual to see this,” Christie Rowe, a geologist at McGill University who specialises in earthquakes, told Gizmodo. “It’s part of the expected pattern.”

When a large earthquake strikes a region, it generates a cascade of smaller quakes, called aftershocks. In general, the greater the magnitude of the initial earthquake—called the mainshock—the larger, more numerous, and longer-lasting the aftershocks will be. New Zealand experienced a large, magnitude 7.9 earthquake last week, and the nation has since felt thousands of aftershocks, some with a magnitude of more than six. 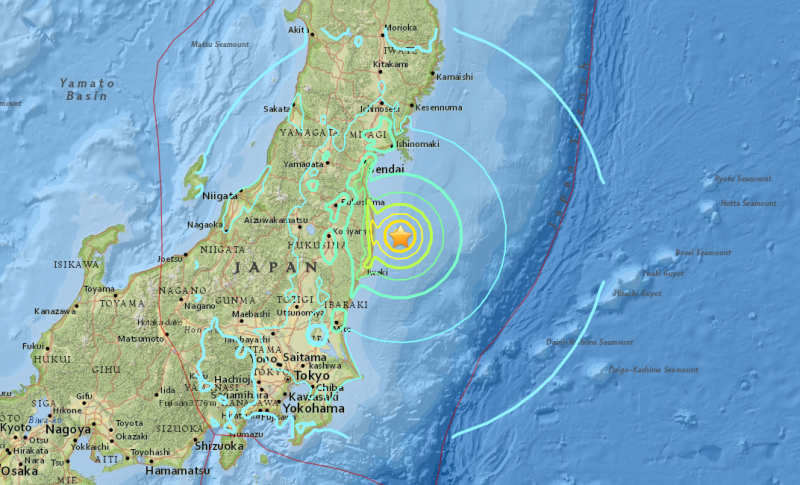 In March of 2011, Japan experienced a massive earthquake when the North American continental plate, which the northern half of the island nation sits on, thrust eastward over the subducting Pacific plate, causing the seabed to rise by up to 100 feet (30 meters) in one go. In the months following the Tōhoku mega-quake, Japan experienced countless aftershocks, including some large, magnitude 7.0+ earthquakes. But five years on, Rowe said, “there’s still a lot of tension left over in the North American plate,” whose momentum carried it a bit too far over the Pacific plate in 2011, leaving it stretched out.

It’s impossible to be certain that this week’s earthquake at Fukushima was direct consequence of the Tōhoku mega-quake. But the two earthquakes occurred in relatively the same spot and featured the same direction of motion. What’s more, this week’s quake falls within the “long tail,” in which big aftershocks from a magnitude 9.1 earthquake are still possible.

In other words, it’s the best explanation we’ve got.

Unfortunately, yesterday’s earthquake is likely to spawn aftershocks of its own, which is why Japan’s Meteorological Association is warning residents to remain vigilant for about a week. “There will be a heightened risk of aftershocks [from this week’s quake],” Rowe said. “Japan can expect more smaller earthquakes.”

The very good news is there are no reported casualties, or even serious injuries, from Tuesday’s earthquake, which generated tsunami waves of up to 4.5 feet (1.4 metres), and was felt as far south as Tokyo. The Fukushima Daini Nuclear Plant, which was taken offline after the 2011 earthquake, suffered a temporary malfunction in the system that cools a spent nuclear fuel rod storage pool. But the system was soon restarted without incident, according to Tokyo Electric Power.

Japan dodged a bullet, but this week’s earthquake was a sobering reminder that the legacy of 2011 mega-quake lives on. And, that in certain parts of the world, earthquake risk is never going to go away.