Young Blood May Not Reverse Ageing After All

Speculation has emerged in recent years that young blood can reverse the ageing process, raising the prospect of an exciting new rejuvenation technique. A new study contradicts this claim, pointing to other factors that may be responsible for the perceived anti-ageing effects of young blood.

A revamped technique for exchanging blood between mice has shown that young blood isn’t responsible for the rejuvenating effects seen in older mice. In a new study published in Nature Communications, a research team from UC Berkeley shows that certain compounds within old blood are responsible for certain aspects of ageing. So while young blood itself doesn’t serve as the magical elixir of youth, there appear to be compounds in old blood that, if eliminated, could be used to reverse the ageing process.

The discovery is not as headline-grabbing as “Young Blood Reverses Ageing,” but it’s a promising finding nonetheless—one that raises the potential for new rejuvenation therapies. 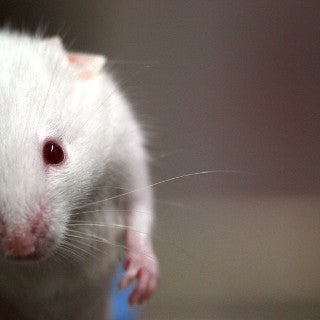 This story goes back to 2005, when UC Berkeley bioengineer Irina Conboy discovered that older mice experienced tissue rejuvenation when surgically tethered to younger mice, allowing for blood to be exchanged between the two. Trouble is, Conboy and her team were at a loss to explain the physiological mechanisms underlying this rejuvenation, leading to wild speculation (particularly in the press) that young blood on its own is enough to reverse the effects of ageing.

“Since then the story has switched into a highly exaggerated search of young blood and its derived silver bullets to combat ageing,” Conboy told Gizmodo. The problem, she says, is that no experimental evidence existed to show that the removal of the old blood is what’s contributing the apparent anti-aging effects. At best, the 2005 study showed that ageing is reversible and not set in stone, while giving no indication that young blood, on its own, could ever be used for medicinal purposes.

What’s more, the 2005 experiment was, in a word, limited. The technique used in the study was imprecise, preventing the scientists from tracking all the factors involved in the transfusion process. Specifically, the old experiments—and many others since then—relied on a complicated surgical procedure called “heterochronic parabiosis” during which the circulation system of two animals are connected for several weeks. With this rather macabre technique, it wasn’t just blood that was shared—the two interconnected mice also shared organs. In addition to the steady drip of youthful pheromones, the older mice had access to younger lungs and kidneys, as well as a younger immune system, heart and liver. At the same time, the younger mice had to maintain an additional older body. The setup also prevented the scientists from being able to track the precise timing of the blood exchanges, or the amount of blood being swapped.

Looking to improve upon this experiment, and also clarify the “hype” about young blood being an anti-ageing silver bullet, Conboy and her team developed a new technique to exchange blood between mice without having to join them so intimately. Using the new system, the mice could be connected or disconnected at the scientists’ discretion, removing the influence of shared organs or any other confounding effects of having two bodies joined together. The researchers were better able to control blood circulation and take more precise measurements.

“Under no circumstances did young blood improve brain neurogenesis in our experiments.”

When the blood was exchanged at a 50:50 ratio, the old mice experienced improved muscle and tissue repair, and reduced fatty build-up in the liver, while the young mice featured diminished learning, agility, and coordination, due to reduced formation of new neurons in the brain. Importantly, these effects were observed after just a couple of days, suggesting a different mechanisms than that of parabiosis, which doesn’t set in for about five to six weeks.

The effects of the blood exchanges on the brain were particularly revealing. Older mice showed no significant improvement in the growth of brain neuron stem cells after receiving young blood, but younger mice who received older blood experienced more than a twofold drop in brain cell development compared to normal young mice.

“Under no circumstances did young blood improve brain neurogenesis in our experiments,” said Conboy. “Old blood appears to have inhibitors of brain cell health and growth, which we need to identify and remove if we want to improve memory.” She said the muscle repair and liver health benefits seen in old mice after receiving young blood are likely due to the young blood diluting the concentration of whatever molecules in the old blood are inhibiting brain cell health and growth.

Conboy’s results contradict a 2014 study by Stanford University scientist Saul Villeda, who showed that young blood, or plasma, can work as medicine. “We do not see this effect in our study,” said Conboy, “but we did not do the experiments exactly as they did.” So, perhaps there’s still hope. And indeed, a separate study by Amy Wagers and Lee Rubin of Harvard’s Department of Stem Cell and Regenerative Biology (HSCRB) showed that injections of a growth factor known as GDF11 (which is found in young blood) are capable of rejuvenating a number of seemingly unrelated physiological attributes. But again, Conboy is sceptical, telling Gizmodo that large number of groups have published the opposite results (that GDF11 is inhibitory or is not involved), and that GDF11 is linked to human colon cancer.

What’s more, Conboy doesn’t believe the positive effects seen in previous experiments (or even her own) could ever translate to humans. Repeated infusions of young blood into old people could cause negative side effects, and smaller blood transfusions aren’t likely to produce results. “Donor blood can save lives when it is depleted in surgery or trauma, but using it to rejuvenate oneself is counterproductive,” Conboy told Gizmodo.

It’s also important to point out that the medical practice of exchanging large amounts of blood between humans does exist, but it’s only used to treat illnesses like severe autoimmune disorders. Unfortunately, frequent and intense blood transfusions of this type present a number of challenges, including complications caused by differences in genetics, and side effects of immune rejection that can lead to organ failure.

Undaunted, Conboy still believes that her team’s findings can translate to meaningful rejuvenation therapies. Moving forward, the UC Berkeley researchers would like to find a way to remove specific inhibitors in old blood, and then return this rejuvenated blood into the same person (to prevent rejection and side effects). Researchers hope this new blood transfusion process could also be used to prevent neurodegeneration, type II diabetes, osteoporosis, and muscle wasting. More speculatively, Conboy’s team would like to find a way to bioengineer old tissues back to their young healthy states. [Nature Communications]