This Is Our Best Look Yet At Saturn's Moon Pandora

Pandora is one of Saturn’s many baby moons, far too runty to form a sphere under its own gravity. Instead, this 52-mile across space rock looks more like a fossilised glob of putty in closest image ever captured by NASA’s Cassini spacecraft.

Cassini is currently circling Saturn’s poles and skirting just outside the gas giant’s F-ring, in a series of dramatic “ring-grazing” orbits that NASA promised would give us an unprecedented look at some of Saturn’s smallest moons. And the spacecraft is already delivering on that promise. The image above was captured on December 18th, from a distance of just 25,200 miles (40,500 kilometres) from the moon Pandora. At resolution of approximately 787 feet (240 metres) per pixel, Pandora’s scars and craters come alive.

From our new Ring-Grazing orbit, we've captured some of the highest-resolution views ever of Saturn's moon Pandora https://t.co/UoG2LwYprC pic.twitter.com/DQXchDtcyy 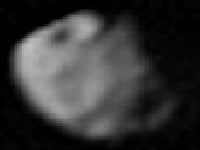 Thirty five years later, Pandora doesn’t seem to have changed all that much, although it’s sharper around the edges and perhaps a bit more menacing thanks to the wonders of giffing. This is your tax dollars at work, Earthlings, and it’s as good as it’s going to get until the next mission to Saturn. [NASA]