People Keep Finding Coins in Their MacBooks and Nobody Knows Why

Look, I love my Macbook, but Apple’s products are often (rightly) criticised for being too expensive. We finally have an explanation for the huge price gouge customers have come to expect: they’re made with literal money!

Earlier this week, an Imgur user named Greatease uploaded some photos that explain the key difference between an Apple SuperDrive and a run-of-the-mill optical drive. Namely that his or her SuperDrive had a US penny wedged underneath the plastic cover.

As an isolated incident, finding money crammed into a rapidly-spinning computer part is of course strange. Did it fall in? Is it serving some crucial operational purpose? Thing is, Greatease is far from the only person to discover loose change in their optical drive.

Stretching all the way back to 2010, Gizmodo was able to find video of a MacBook user who discovered a quarter in his SuperDrive. The 40-second video, uploaded by one Greg Kilpatrick, is captioned “Quarter found inside Macbook Pro — AppleCare does know why it’s there... Anyone else know?” Sure “does” could be a simple typo. Or part of a wide-ranging conspiracy.

Two of the four commenters on Kilpatrick’s video claim they have had similar experiences. 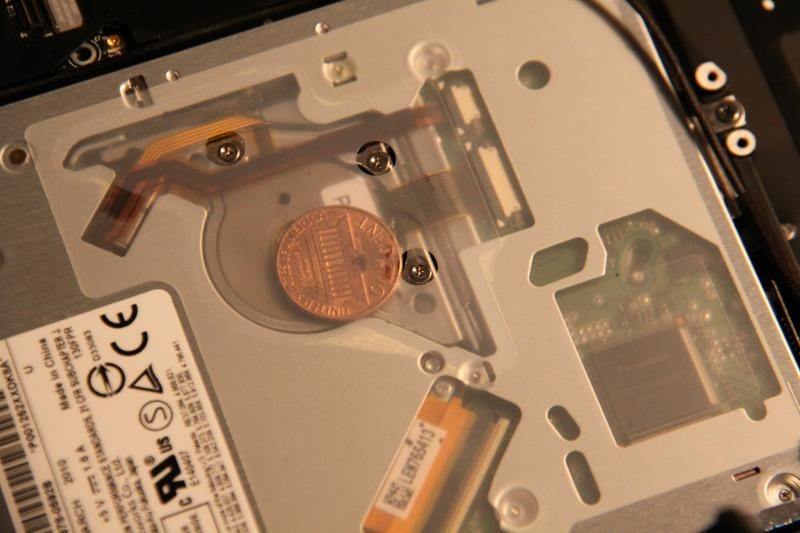 Later that year this photo surfaced on Experts Exchange depicting a penny similarly caught beneath the plastic shielding. How could it have gotten there? Truly one of our age’s greatest mysteries.

In 2013, this photo of a pretty messed-up looking Canadian quarter trapped inside a SuperDrive was posted to Mac Rumors by user Unplottable. He or she claims the 2011 MacBook was purchased directly from an Apple Store in Montreal.

The above photo was posted about three years ago from Redditor Ianlafo. Different laptop. Same weird trapped coin — and always right above the spindle. How deep does this conspiracy go, Apple? Tell us.

And earlier this year, from Redditor eddie360 — fittingly posted to r/techsupportgore — which again ticks off all the hallmarks of this bizarre phenomenon.

How does this keep happening across multiple Macbook models (and with several different kinds of currency)?

Some speculated that a loose coin in a bag or backpack might have wedged itself in there, perhaps first entering the laptop’s guts through the disk slot. But as Ianlafo pointed out “the plastic is sealed on all four edges to the superdrive with a pretty strong adhesive.” Hm. Is Apple putting coins in our SuperDrives on purpose? I think Apple is putting change in our SuperDrives. Apple, why on Earth are you doing that?

There’s no knowing how prevalent of an issue this is since most people rarely (if ever) open up their machines to do maintenance, farming that sort of thing out to AppleCare or similar tech help cabals. I could be anywhere from one to 25 cents richer right now and not even know it, because nothing sounds less appealing to me than opening up this sluggish old laptop to gaze upon half a decade of dust.

We’ve reached out to Apple to see if this conspiracy goes all the way to the top. In the meantime, grab a screwdriver and let us know in comments if you’ve found money in any of your gadgets!