We ate some weird shit in 2016. A person born in the year 1000 AD definitely wouldn’t comprehend a Dorito. He certainly wouldn’t understand why Frosties are 'grrrreat', and if you showed him a Twinkie, he’d probably burn you at the stake. But the way things are headed, our food is bound to get a lot weirder.

Scientific research doesn’t just bring us more convenient and cheaper food options, but the hope of overcoming sustainability issues, too. The meat industry plays a huge role in climate change — around 10 percent of America’s total greenhouse gas emissions came from the agriculture sector in 2014, with almost a third of that climate-warming carbon attributed to methane from cattle, according to the Environmental Protection Agency. Meanwhile, Earth’s population is growing fast, and many are fretting about how to feed the 9 billion people who will be inhabiting the planet in 2050.

Here are some foods that scientists and companies are tinkering with today, which are poised to make a showing on dinner plates or in lunch boxes in the not-so-distant future.

One future food that’s sure to take some getting used to will be insects, like crickets, grasshoppers and mealworms. You can already buy pasta and food bars made with cricket flour to add some extra protein into meals, our you can eat the crickets whole. 100-gram servings of crickets and grasshoppers amount to around 13 and 21 grams of protein, respectively. Others are exploring mealworms and black soldier flies as a source of dietary fat.

The debate continues over how much more environmentally-friendly bugs are than meat — a study from last year found that crickets fed low-quality diets didn’t grow nearly as large as those fed higher-quality diets akin to what farmers feed livestock. The black soldier fly did not suffer this same issue, and produced protein more efficiently.

Insects supposedly taste pretty good when prepared properly, reports the New York Times, and I quite enjoyed cricket pasta when I tasted it. But broader acceptance will probably require overcoming our cultural taboos. Around two billion people already snack on arthropods, so why not join them?

A burger made from Cultured Beef. Photo: David Parry/PA Wire

It’s probably 10 to 20 years until we’ll see mass produced synthetic meat, scientist Mark Post told Gizmodo prior, although his company could begin selling the product in just a few years. Reportedly, the first samples of Post’s $300,000-plus meatless meat patty didn’t taste too good — “edible but not delectable.” He’s working on improving the flavour profile now.

Sure, there are ethical reasons to not eat meat — cows and goats and pigs are cute living things. But if you’re still craving flesh, there’s at least one writhing option that might be better: fish. Aside from aforementioned emissions issues, raising cattle also takes up a lot of land, and a lot of livestock feed. Fish require only a fraction the amount of feed to generate the same amount of protein.

Overfishing is a major concern, but a recent study found that sustainable practices like catch limits might be able to increase fish stocks by 2050. If better commercial fishing practices are implemented and combined with advancements in aquaculture, or fish farming, our dinner plates might soon pile high with the catch of the day. “For the first time in human history, most of our aquatic food now comes from farming rather than fishing,” Malcolm Beveridge, a former director of Aquaculture and Genetics at WorldFish, told Quartz last year. In 2011, agriculture hit a historic milestone when the world farmed more fish than beef for the first time. We haven’t turned back. 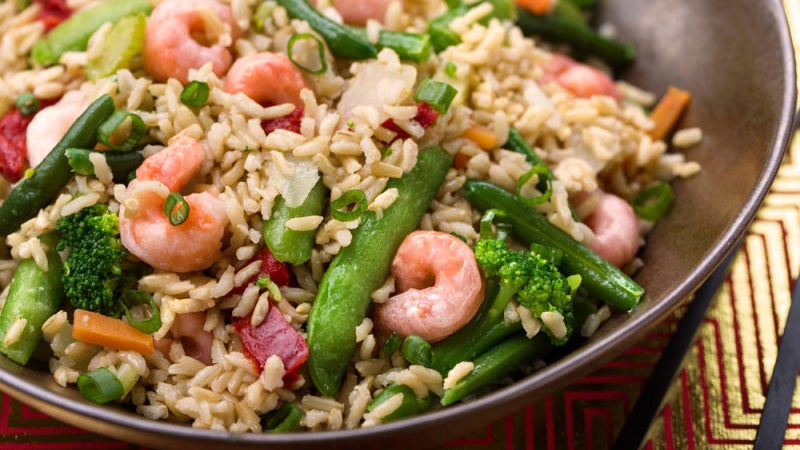 If we’re growing meat in a lab, why not grow fish, too? NASA researchers created full fish fillets by dipping goldfish muscle into foetal bovine serum, a process used by the fake meat makers as well. Another company, New Wave Foods, is looking to create synthetic shrimp out of red algae.

As Gizmodo has previously reported, the jury is still out on whether these faux-meat products can solve our natural resource problems. “I think it makes a lot more sense to say this could be a luxury good,” said Oron Catts, the director of SymbioticA, a biotechnology research centre at the University of Western Australia.

Microalgae, like other plants, feed off carbon dioxide in the atmosphere. A 2013 study from the awesomely-titled Algal Research journal found that these tiny green critters produce a slew of proteins, fats, and carbohydrates that make for a good source of nutrients in food products. A more recent study found that some species of algae contained lots of omega 3 fatty acids, as well as other fatty acids that could promote good heart health.

You might know someone who’s already eaten algae. Soylent included algal flour in their meal replacement beverages. The algae was subsequently blamed for a slew of gastrointestinal problems in consumers, so Soylent took the questionable ingredient out. Bloomberg reports that products by TerraVia, Soylent’s algae provider, have made people sick as well. But this probably won’t be the end of algae, since TerraVia denies their flour as the culprit and Soylent’s newest products still contain algae-based oil.

Genetic modification already makes appearances in corn, soybeans, canola, sugar beets, potatoes, and other vegetables, mainly to confer either pesticide or herbicide resistance so bugs and weeds don’t ruin the harvests. But why stop there? The new gene editing tool CRISPR/Cas-9 allows scientists to alter plant genomes with incredible precision; scientists have used it to produce non-browning apples, non-bruising potatoes, and virus-resistant pigs. Swedish scientists claimed to eat the first CRISPR meal ever served this past fall, according to Science.

“GMO everything” will probably spook plenty of Americans, many of whom don’t understand that these products are considered quite safe.

A 3D-printed biscuit made from insect flour at the Wellcome Collection in London. Photo: AP

3D-printed food might save cooking time and offer a tasty, easy-to-eat option for elderly people suffering from difficulty swallowing. Even NASA invested in researching 3d printing food in zero-gravity so astronauts can “cook” on those deep space missions. But more importantly, it will solve that one enormous problem: my food doesn’t grow in a cool shape.

Honestly Can We Just Stop Eating And Photosynthesise

Maybe one day we’ll be able to just veg out, sit under the sun and turn carbon dioxide into the sugar our bodies need. The sea slug Elysia chlorotica already steals DNA from algae so it can photosynthesise itself... so what about us? In actuality, even if we had photosynthesis - causing cholorplasts in our cells, our bodies would need a lot more surface area to maximize our exposure to the sun.

So go forth and try some future food, because one day your grandkids might be feeding you a slurry of 3D-printed bugs.