Google’s Project Ara modular smartphone was a weird concept that didn’t make it to market. The idea was to give users the option to change out custom modules for upgrades and odd individual features. A new report reveals that one of the most unusual modules would’ve featured a personal tardigrade aquarium.

Venturebeat has taken a look back at all that could’ve been if Project Ara had made it past the prototype stage. An e-ink display with weather updates, a high-quality microphone, and a breath mint dispenser were among the novelty modules that would be optional. But Google wanted to commission something that would make an impression and get people talking.

For a really out there concept, the company commissioned ideas from Midnight Commercial, a Brooklyn-based creative firm. The firm had gained attention with its Rube Goldberg machine music video for Ok Go and a Barista Bot that could draw portraits in latte foam.

The Midnight Commercial team came back with four pitches. Among the rejected ideas was a module that could print a photo, graffiti-style on random surfaces. But the idea that Google decided to give the green light was a module that featured a small tardigrade aquarium.

Tardigrades were a hot meme at the time because the fascinating little “water bears” were cool to look at and had a reputation for being indestructible. 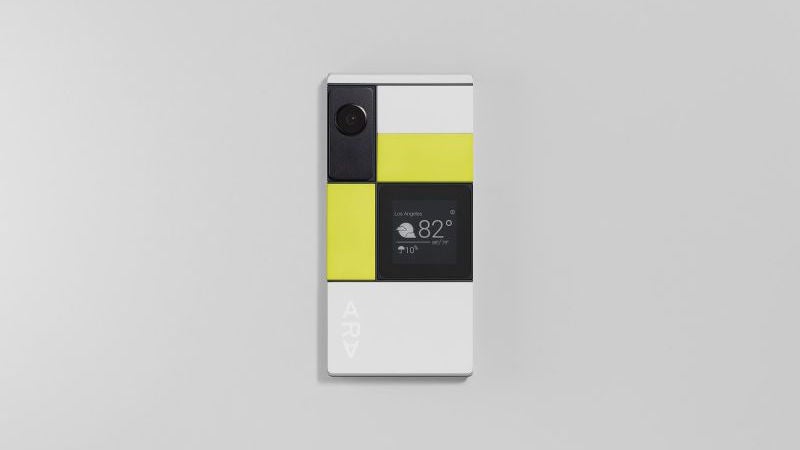 “So the idea is we create a small sealed biome with microorganisms, tardigrades, maybe some others, algae, and a solution that is balanced so that it can live for a long, indefinite period of time. That little sealed biome would sit on top of a digital microscope and that would be sealed in the module, and then through the phone itself you could look in and see the micro-organisms in real time that live in your phone. I think we were doing something like 30x optical zoom.”

From an engineering standpoint the project proved to be tough. The team had limited space to make the module function but it eventually figured out a system for viewing that used micro lens arrays. (You can see some mockups here.)

From a biological standpoint though, the project was a bit of a disaster. Returning to work after a weekend, the team found that the carnivorous strain they had been using was hungry and without food it ate its own. Noah Feehan, a Midnight Commercial engineer, tells Venturebeat that the cannibal tardigrade discovery wasn’t so bad, “to be honest, that’s an excellent app experience.”

Unfortunately, keeping the tardigrades alive, in general, was surprisingly difficult. Rapid temperature changes kill the tiny creatures. They could survive being frozen for 30 years if you just add a little water. But the team found that the light in its module killed them for good after about 2 hours.

The solution was to just accept the tardigrades would probably die and to use software that wouldn’t let you look at them for too long. If the module had gone in to production it would’ve been a sort of 21st century riff on sea-monkeys, that is to say, kind of neat while it lasts.

Unfortunately for the team, Google cancelled Project Ara last summer and we’ll never find out just how weird it all could’ve been. [Venturebeat]