This Is How Nike's Self-Lacing Trainers Actually Work

When Nike released its self-lacing HyperAdapt 1.0 trainers last year, people went crazy for them, even with their outrageous £600 price tag. But does anyone actually understand how they work?

Now, thanks to a detailed teardown from the folks at Mind Tribe, we can try (and also try to get some insight into why the insane price might be justified). To start the excavation, the Mind Tribe engineers carefully disconnected a technical fibre called Flywire that Nike uses to tighten the visible “laces.” The Flywire is essentially a cable pulley system runs up to plastic channels on either side of the shoe. It weaves through the visible “laces” and tightens when a motor activates. 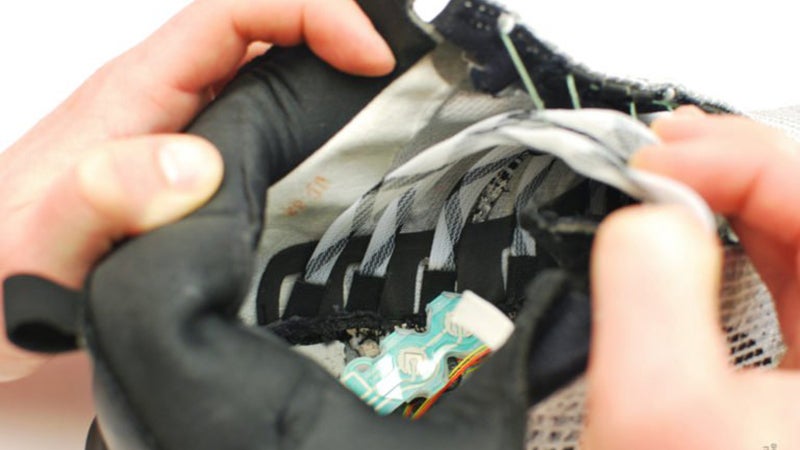 The visible laces of the self-lacing shoes are intertwined with a cable pulley system. (Image: Mind Tribe)

But simply understanding how the shoes tightened wasn’t enough. The Mind Tribe team continued to surgically rip apart the shoe, piece by piece, to see how the electronics were squeezed into such a small package.

Once the team disconnected the laces from the Flywire, they pulled out the shoe’s insole and pulled up the bootliner to reveal a small electronics system hidden inside the shoe’s sole. They discovered flexible circuit board, board-to-board connectors, and even a tiny battery to power the system. There was also a small pressure sensor right on the heel of the shoe (used to activate the system). 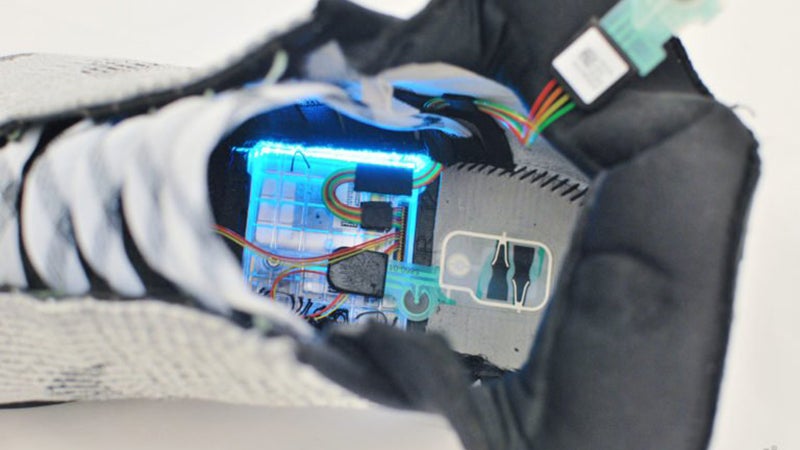 A small PCB and battery are hidden in the bottom of the shoe. (Image: Mind Tribe)

All of the periphery electronics are connected to this palm-sized circuit board. That means things like the small buttons on the side of the shoe, the LED lights that glow at the bottom of the shoe, and even a pressure sensor hidden in the heel of the shoe were all attached in unique ways.

The team also had to cut a bunch of padding and other fabric in order to free the electronics from the textile part of the shoe. Then they started examining all the circuitry they pulled out. As Mind Tribe describes, there were even some hidden details in the electronic system.

The most interesting feature on the outside of [the motor and battery box] is this large peripheral connector, which has several unpopulated pins, and even a 3-pin header coming off of it with nothing connected to the other end.

This might suggest Nike is planning to introduce more peripherals for this system later. Those extra pins could connect to anything: a step-energy harvesting system to charge the battery; or an accelerometer for Nike+iPod-style activity tracking; maybe even a bluetooth module so your HyperAdapts can work with an app and adjust tension as soon as you’re getting near the track or court.

Then, of course, there’s the motor that drives the entire system. After the team surgically removed the battery, motor, and lighting from the shoe while keeping it all intact, they began running tests on the hardware. They discovered the HyperAdapt 1.0's actually have an incredibly powerful motor for something that just tightens shoelaces.

This unit outputs an impressive amount of pull force for its size, easily in the neighbourhood of 30+ lb. before stalling out. You don’t often see a box that fits in the palm of your hand and can lift three gallon jugs of milk, with power to spare. The gearbox helps by stepping down the RPM while increasing the torque, but how fast must the motor be spinning? We recorded an audio clip of the motor running and ran it through Audacity’s Fast Fourier Transform (FFT).

We think the 600Hz is the motor with the other spikes being harmonics or brush noise. This would correspond to approximately 36,000rpm.

While it might look simple from an outsider’s perspective, the entire self-lacing system is actually extremely complicated. As the teardown team explains, it’s incredibly hard to build such a complicated system that’s seamlessly woven into textiles and is tough enough to take a beating.

That explains, at least in part, why Wired reported that Nike spent 28 years brainstorming and 11 years of research and development in order to make these self-lacing shoes. It’s an incredible feat in engineering and while they might not be quite as cool as the legendary Nike Air Mags from Back to the Future II, they’re still pretty damn sweet. If only they didn’t cost so damn much. [Mind Tribe] 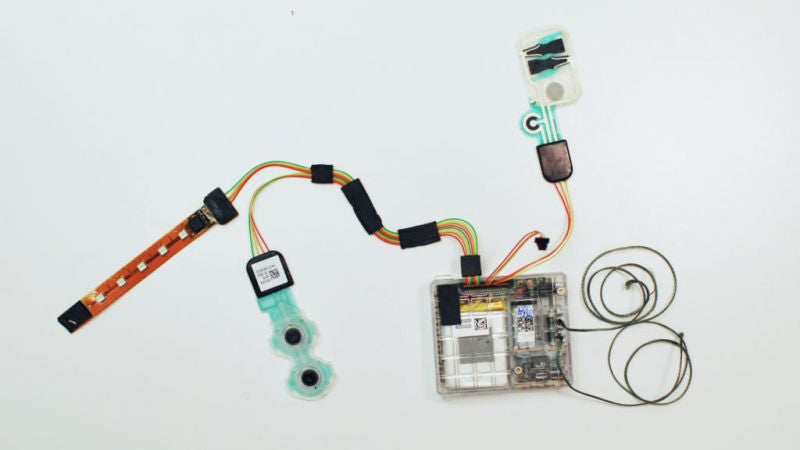 Tags:
nike
design
back to the future
teardown
air mags
hyperadapt 10
self lacing sneakers
how it works