Why Is This Quasar Running Away From Such a Handsome Galaxy?

We don’t understand quasars all that well, but are pretty certain that these incredibly bright lights belong in the centres of galaxies. So it looked a little weird when astronomers spotted quasar 3C 186 thirty six thousand light years away from the centre of its galaxy, seemingly trying to escape.

Given their brightness and location in galactic centres, it’s likely that quasars are supermassive black holes, and that the bright light comes from the friction of gas and dust orbiting the central mass at incredibly high speeds. An international team of astronomers spotted this strange galactic escape eight billion light years away with the Hubble Space Telescope, Sloan Digital Sky Survey, and Chandra X-Ray Observatory. They think the quasar could have received a kick from gravitational waves, when it was created in a violent collision between black holes three billions of time the mass of our own Sun.

But that explanation didn’t sit quite right with Grant Tremblay, astrophysicist at Yale and one of the paper’s authors. At first, Tremblay and his colleagues thought the galaxy and its quasar had just recently merged with another one. “But mergers that happen recently look like total trainwreck messes,” he told Gizmodo. “This is a really regular looking galaxy, which means if there was a major merger, it would have had to have happened several billion years ago.” In other words, it would have taken time after the merger for the galaxy to re-assume its current elliptical shape.

Furthermore, black holes want to return to the centre of their galaxies through a process called dynamical friction, said Tremblay. This quasar seems to be rushing away at around 2000 kilometres per second (4.5 million miles per hour) instead. 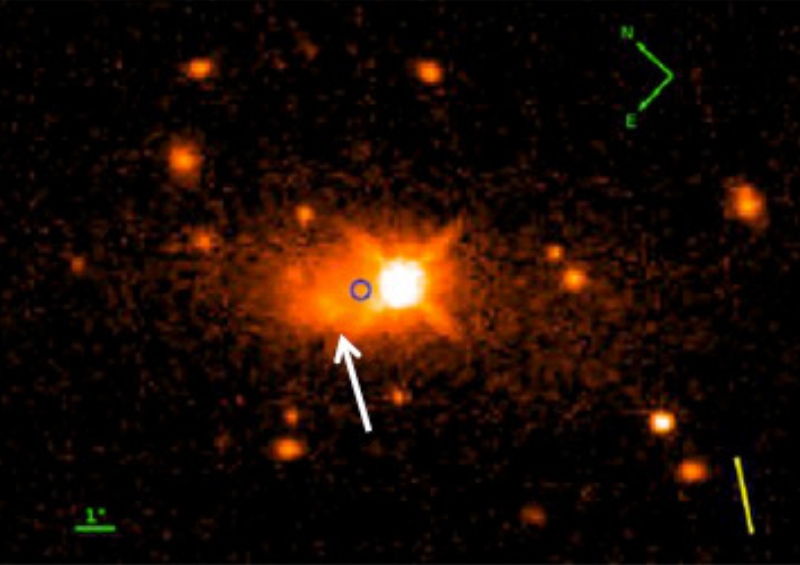 A more obvious photo of the black hole escaping - the black circle is the galactic centre (Image: Chiaberge et al)

So, why would a bright quasar like 3C 186 run away from such a good lookin’ galaxy? The paper, which will be published next week in the journal Astronomy & Astrophysics, proposes one of the most violent collisions possible. First, the idea goes, two supermassive black holes spun around each other and fused, their combined mass creating the three billion solar mass quasar 3C 186. Any leftover momentum from the spinning would turn into gravitational waves, ripples that travel through and change the shape of spacetime itself, which physicists first observed last year. Models show that resulting gravitational wave ‘kick’ could account for the black hole’s speedy escape.

That’s just one explanation, of course, said Tremblay. There could be others: Maybe the quasar is speeding away from a much messier galaxy that only recently collided with another, and our imaging has just made it look like it’s in good shape, for example. Some explanations Tremblay and company have ruled out, like the possibility that the quasar is just sitting in front of the galaxy but not at all associated with it. It would be silly to think we know what’s going on for sure. “Nature is weird,” he said. “There are a lot of galaxies in the universe. From a pure dynamical friction argument, a black hole should sink to the centre of its host galaxy. But that doesn’t mean its offset can only be from a gravitational wave recoil.”

Others thought the gravitational wave explanation seemed pretty good. “I tend to agree with their conclusion,” Lionel London, a research associate at Cardiff University who models gravitational waves, told Gizmodo in a Skype message. “The inspiral of two black holes... causes the entire two-black hole system to wiggle around, and just before merger, there’s a little bit of wiggle left, which manifests as a kicked final black hole.”

Scientists are continuing to study this quasar to confirm their gravitational wave-based explanation. But until then, good luck out there 3C 186. That galaxy wasn’t good enough for you anyway. [Astronomy & Astrophysics via HubbleSite.org]