Will Humans Have to Upgrade Their Bodies to Survive on Mars?

Living and boning in space — particularly on Mars — has fascinated our degenerate species for decades. Recently, SpaceX founder Elon Musk decided to put his very large amount of money where his mouth is by announcing his plans to colonise the Red Planet. NASA also likes to bloviate about its Journey to Mars in the 2030s, and there are a handful of other, shadier plans to colonise the Red Planet championed by celebrities, billionaires, and even the UAE.

But there’s a big difference between putting a few boots on the ground and setting up a long-term base on another planet. Regarding human colonisation of Mars, there are a host of concerns — in particular, how will humans fare, both physically and psychologically, in such a harsh environment? In a paper published recently in the journal Space Policy, Konrad Szocik, a cognitive scientist at the University of Information Technology and Management in Rzeszow, Poland, argues that sending astronauts to live aboard the ISS is not adequate training for life on Mars. In fact, Szocik surmises humans will have to alter their bodies in a pretty extreme way in order to physically and emotionally sustain themselves in a Martian colony.

“My idea is that [the] human body and mind is adapted to live in the terrestrial environment,” Szocik told Gizmodo in an email. “Consequently, some particular physiological and psychological challenges during [the] journey and then during living on Mars probably will be too difficult for human beings to survive. For instance, we should take into account the high risk of health problems during that mission and no direct professional medical support and care.”

“There are usually unintended consequences when making manipulations like this”

In his paper, Szocik explores some of the preventative treatments other researchers have suggested astronauts undergo before heading to Mars. He notes that some have suggested “placing the crew into a coma before the journey,” which could reduce energy requirements, prevent muscle atrophy, and provide extra shielding from deep space radiation, and even “removing the appendix to avoid great dangers.”

Indeed, in 2012, researchers at the National Institutes of Health (NIH) enumerated the potential risks and rewards of performing appendectomies and cholecystectomies—the removal of the gallbladder — before sending astronauts into extended periods of spaceflight. The logic is pretty simple: If someone’s appendix or gall bladder bursts in space, surgery could more worse than unpleasant—it could be impossible.

Szocik also argues that the first crewed missions to the Red Planet could take a heavy psychological toll. Though early colonisers would presumably undergo intense psychological screening, the pressures of isolation in a high-risk environment are daunting. But early results from NASA’s HI-SEAS experiment, which mimics this isolation by sealing off small crews in a dome near the top of the Mauna Loa volcano in Hawaii, are promising. Recently, a crew that spent a year in this pseudo-Martian environment emerged pretty upbeat and positive, despite being trapped among each other’s foul odours and character flaws.

“It is true that psychological issues (“behavioural health” in NASA’s terminology) will be a major concern,” Mark Shelhamer, former chief scientist at NASA’s human research program, told Gizmodo. “In that sense, the ISS is not a great venue for simulating a Mars mission. ISS is isolated and confined (though not as much as a Mars spacecraft will be). However, crews rotate so that there is a set of new faces every three months, and there is a very robust and effective psychological support structure in place (astronauts can speak to friends, family, physicians, and psychologists on Earth at any time, with no communication lag).”

Overall, Szocik argues that no Earthly preparation can necessarily give someone everything they need to survive Mars in the longterm. “I think that medicine can be insufficient and that there will be necessary some permanent solutions like genetical and/or surgical modifications,” Szocik said, adding that we should use the idea of transhumanism—that by harnessing science and technology, we can enhance ourselves to survive in vastly different environments—to prepare.

This concept isn’t exactly new: futurists have long proposed that humanity will need to use biology, nanotechnology, information technology, and cognitive science to make us more equipped for life in space. But while accelerating our own biological evolution in order to boost our chances of survival on Mars admittedly sounds badass, not everyone’s convinced it’s feasible, ethical, or necessary.

“Already, people have suggested selecting astronauts for genetic predisposition for such things as radiation resistance,” Shelhamer said. “Of course this idea is fraught with problems. For one, it’s illegal to make employment decisions based on genetic information. For another, there are usually unintended consequences when making manipulations like this, and who knows what might get worse if we pick and choose what we think needs to be made better.”

While he admits Szocik’s ideas are interesting, Shelhamer feels they’re ultimately unnecessary. “I think we can give astronauts the tools—physical, mental, operational—so that they are, individually and as a group, resilient in the face of the unknown,” he said. “This is what I’m working on now, but it’s still in the very early stages. What kind of person thrives in an extreme environment? What types of mission structures are in place to help that person? This needs to be examined systematically.”

Would-be future Martian president Elon Musk was even blunter when asked to comment on the idea that humans would have to alter their biology to survive on Mars, calling the entire premise “ridiculous.” “Being in deep space or Earth orbit for long periods is far worse than Mars,” Musk told Gizmodo over a Twitter DM. “Buzz Aldrin is still doing fine, as are the other astronauts.” 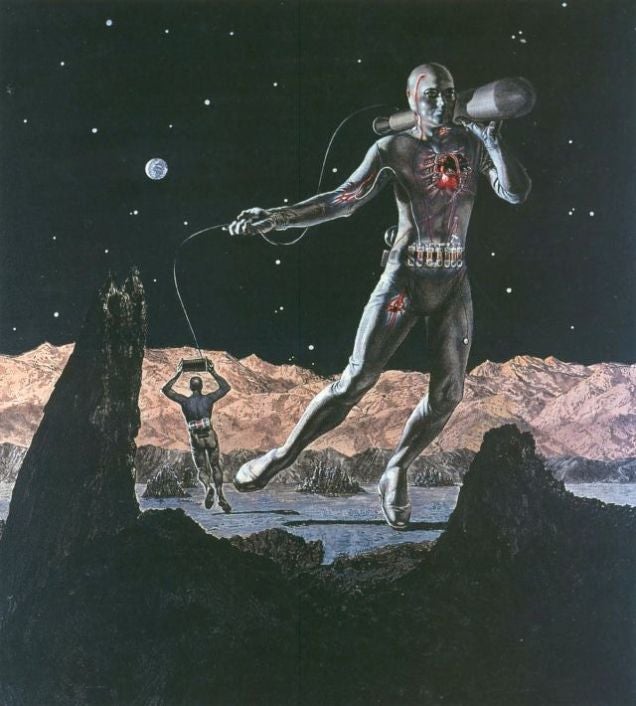 Early rendition of a cyborg by Fred Freeman. This appeared in the July 11, 1960 issue of LIFE Magazine.

Even if the optimists in the room are right, and we don’t have to modify ourselves to live out healthy adult lives on Mars, a salient question remains when it comes to colonisation: how will we reproduce? Although not nearly as bad as deep space, the surface of Mars receives some intense radiation, owing to the fact that its atmosphere is much thinner than Earth’s, and it has no global magnetic field to deflect energetic particles. This is particularly concerning for women looking to get pregnant, as even small doses of ionising radiation can have severe health consequences for developing foetuses. In all likelihood, long term settlements would have to be built beneath the planet’s surface to protect folks, particularly the young, old, sick and pregnant, from solar energetic particles and galactic cosmic rays.

“We do not know how reduced gravity and radiation will affect the process of human reproduction,”Szocik said. “We can suppose that this impact could be deleterious.”

Szocik added that in order to maintain a colony that can sustain itself without inbreeding, we’ll have to send a ton of people to Mars, which could be difficult. Therefore, he suggests “taking into account an opportunity of human cloning or other similar methods,” in order to keep the colony going. Hmm.

Stretching humanity across several planets sounds exciting. It also sounds terrifying! Hopefully, upcoming missions like NASA’s 2020 rover will give us more insight into how we can live (and fuck) on such a cold, unfeeling planet.