It’s been 99 days since reality TV star Donald Trump was sworn in as president, and he’s really shaken things up in Washington. So far, with Republican control of Congress, he’s repealed Obamaca—ah, shit, never mind. Well, he did pass that comprehensive tax reform he promised. Oh, wait, I guess he didn’t do that either. One thing Trump has definitely done, though, is set up a magic button in the Oval Office that summons a butler carrying a refreshing, ice-cold Coca-Cola.

Here’s an excerpt from yesterday’s Financial Times interview with Don:

Sitting across from Donald Trump in the Oval Office, my eyes are drawn to a little red button on a box that sits on his desk. “This isn’t the nuclear button, is it?” I joke, pointing. “No, no, everyone thinks it is,” Trump says on cue, before leaning over and pressing it to order some Cokes. “Everyone does get a little nervous when I press that button.”

Now, check out this picture:

here's a pic from reuters of Trump with the electoral maps he showed to reporters yesterday pic.twitter.com/1X3edpeJDQ

And check out what’s sitting on the Resolute Desk on the left corner closest to Trump: a Coke! You can even see a device matching the description of the box he reportedly orders Cokes with, next to the phone.

Here it is. Fits with FT description: "a little red button on a box that sits on his desk." (https://t.co/FCTTPUeVq0) pic.twitter.com/KaXg54ZSj5

This isn’t the first time the Coke Button, which appears to bear the presidential seal, has been spotted in the wild. Here’s an excerpt from an Associated Press story a few days ago:

A man accustomed to wealth and its trappings, Trump has embraced life in the Executive Mansion, often regaling guests with trivia about the historic decor. With the push of a red button placed on the Resolute Desk that presidents have used for decades, a White House butler soon arrived with a Coke for the president.

And, of course, Donald Trump has a storied history with Coke, particularly the Diet version. 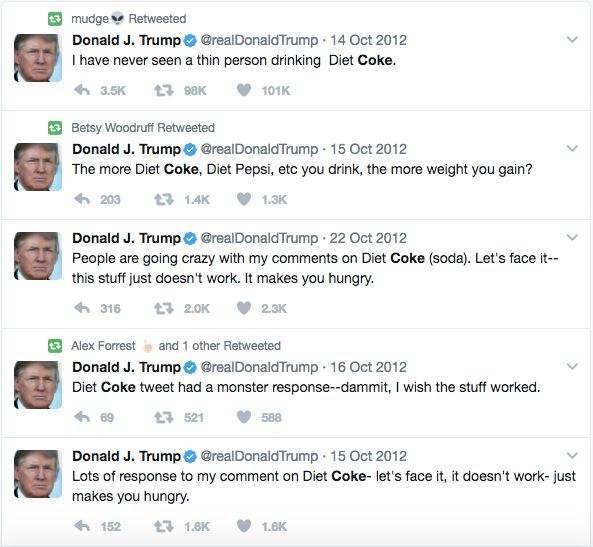 The button has existed on previous presidents’ desks, but, as far as we can tell, this is the first time pushing the button will automatically result in soda. Good stuff, Donald. [Financial Times]

It'll Probably Always be a Man Delivering Your Stuff