An Italian neuroscientist who says he’s planning to perform the world’s first head transplant later this year has told a German magazine that he intends to thaw a cryogenically preserved brain and transplant it in a donor body within three years. It’s a preposterous claim given the current limitations of medical science, and a complete misreading of how the fledgling cryonics industry works. It’s also a significant credibility fail for a doctor who’s already struggling to be taken seriously.

Professor Sergio Canavero, who works at the Turin Advanced Neuromodulation Group, made headlines a few years ago by suggesting that head transplants (shouldn’t that be body transplants?) will soon become a reality. In the years since, the neuroscientist has performed experiments on mice, rats, dogs, and even monkeys, often claiming success even as other experts called his results vague and inconclusive.

In a recent interview with German magazine Ooom, Canavero said he’s planning to perform the world’s first human head transplant in December 2017 in China, with the help of surgeon Xiaoping Ren of Harbin Medical University. In what could be a momentous breakthrough in medical technology—or more likely a complete disaster—the surgery will be performed on a Chinese volunteer, and not Russian candidate Valery Spiridonov as previously reported. 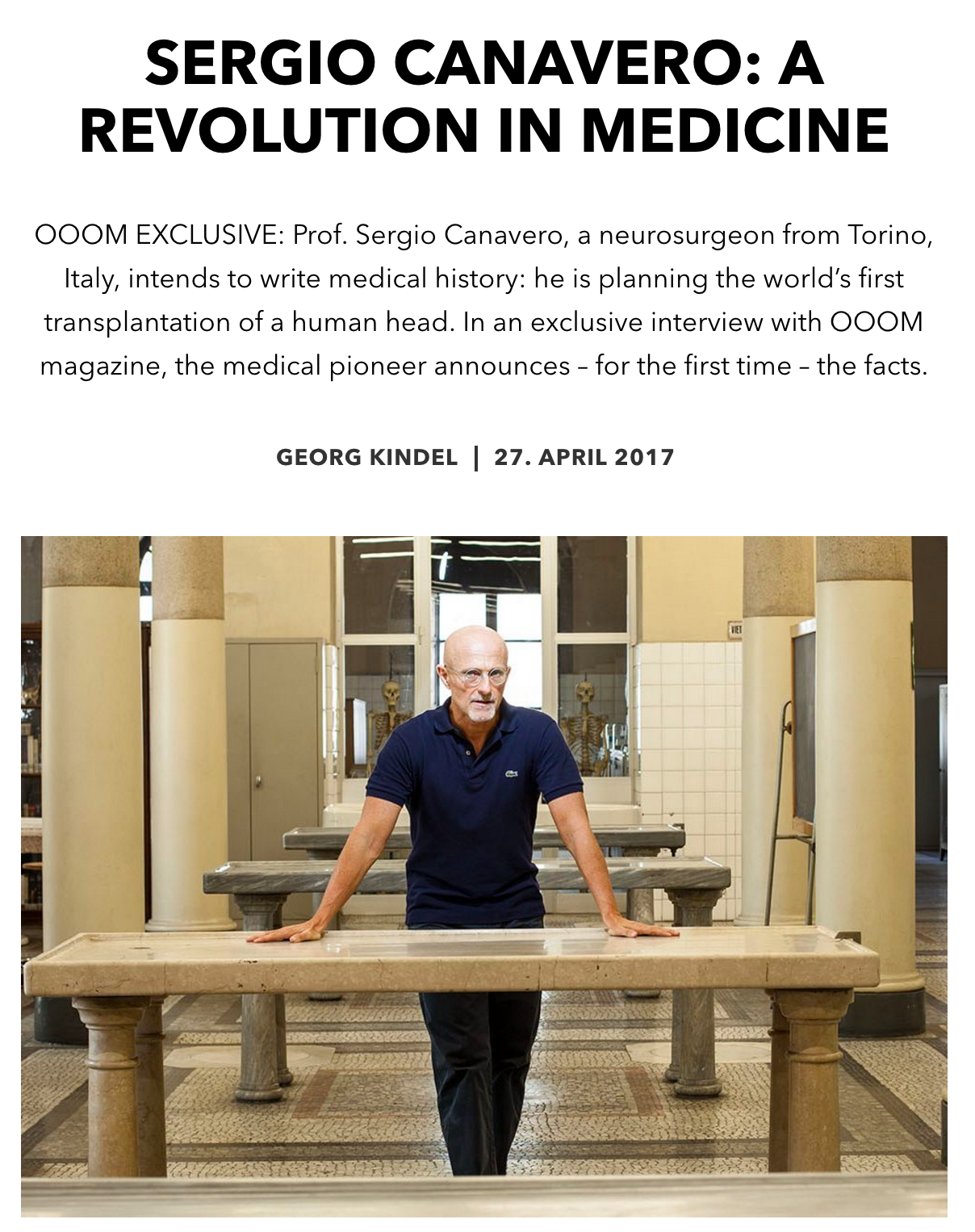 Sergio Canavero in the latest edition of Ooom.

As if the idea of a head transplant isn’t radical enough, Canavero told Ooom that he’s already making plans to perform the world’s first brain transplant—and that he’ll be ready to do it in three years at the latest.

“It has many advantages,” he told Ooom. “There are practically no immune reactions or rejections. We could attempt to reawaken cryogenically frozen brains.” The only problem he foresees is that no aspect of a person’s original body will remain the same. “Your head is no longer there; your brain is transplanted into an entirely different skull,” he said.

To get his hands on cryogenically-preserved brains, Canavero said he’ll recruit the help of the Alcor Life Extension Foundation, a cryonics company located in Scottsdale, Arizona. In addition to cryopreserving whole bodies in vats of liquid nitrogen, Alcor also stores heads, which the company refers to as “neuros.”

“The Alcor Life Extension has had no contact with Dr. Canavero. It is not yet possible to revive human brains cryopreserved with present methods.”

“[S]pokespeople of [Alcor] tend to state that this task,” of transplanting cryogenically-preserved brains into new bodies, “is one for the doctors and scientists of the future to solve,” Canavero told Ooom. “It is nice, though, that someone will know what to do with these frozen brains in 100 or 200 years. I have good news for them....We will try to bring the first of the company’s patients back to life, not in 100 years. As soon as the first human head transplant has taken place, i.e., no later than in 2018, we will be able to attempt to reawaken the first frozen head.”

Canavero’s ambitions are laudable, but that’s the only good thing that can be said about this rogue neuroscientist. His comments defy the current state of medicine, and are basically a complete break with reality. Developing the science and tools required to perform such a delicate task will require decades of work, and the fact that a brain transplant hasn’t even been performed on an animal test subject shows how far we are from achieving this goal. To say that it’ll be done “within three years at the latest” is both reckless and deliberately misleading. Sadly, The Daily Mail picked up on the Ooom interview, publishing a breathless headline declaring that brain transplants are all but upon us.

Canavero’s comments to Ooom suggests he knows virtually nothing of the preservation process and how this industry actually works. “First, your body is frozen at minus 196 degrees Celsius; then, it is submerged in liquid nitrogen,” he told Ooom.

As even the most starry-eyed cryonicist knows, the technologies required to restore a brain from this state are still decades—if not centuries—away. In all likelihood, future scientists will require molecular scale precision and nano-scale machinery to pull off such a feat. For now, the prospect of reanimation is still very much the stuff of science fiction.

Most troublingly of all, Canavero made his comments about Alcor without consulting the company first. Gizmodo reached out to Alcor for comment, and here’s what the company told us:

The Alcor Life Extension has had no contact with Dr. Canavero. It is not yet possible to revive human brains cryopreserved with present methods. Revival of today’s cryonics patients will require future repair by highly advanced future technology, such as molecular nanotechnology. Technology that is advanced enough to repair a cryopreserved brain would by its nature also be able to regrow new tissues, organs, and a healthy body for the revived person. Therefore Alcor does not expect body donations or transplants to ever be necessary for revival of cryonics patients. Until advanced tissue regeneration technology is developed, we wish Dr. Canavero well in his development of body transplant surgery for living patients today who might benefit.

Gizmodo also reached out to Dennis Kowalski, the president and CEO of the Michigan-based Cryonics Institute, to see how another leader in the field felt about Canavero’s claims.

“Cryonics Institute has no association with this doctor,” Kowalski said. “The link between what he is doing and what we are doing is nonexistent. We would ask that he please not associate his transplant activities with cryonics. The Cryonics Institute preserves only whole bodies and rejects any unfounded predictions about what we do.”

Perhaps the most worrisome thing about all of this is the nonchalant and off-the-cuff manner in which Canavero makes his claims. He is an unabashed self-promoter of the worst kind, spouting off pseudoscientific nonsense and perpetuating false hopes. What’s also clear is that Canavero suffers from delusions of grandeur. As he told Ooom, “If we manage to prove that our brain does not create consciousness, religions will be swept away forever. Humans will no longer need to be afraid of death.”

We reached out to Professor Canavero for comment and will update this post should we hear back from him. [Ooom via The Telegraph]

Forget Spider-Man, Scientists Can (Almost) Turn You Into Gecko-Man

People Are Already Opening Accounts to Save for Space

When the Hell Will We Find Planet Nine?