It isn’t only the processor that makes a really cheap computer slow. Or the memory, or the video card (or lack of video card). The primary reason your cheap laptop loudly chugs along at glacial speeds is because of the hard drive. Cheap laptops use cheap hard disk drives, which are much slower than the solid state drives found in better computers. But Intel’s new Optane Memory changes that. This little $70 ( £56) chip makes a cheap hard disk drive run as fast as a solid state drive.

It does all this by using a brand new type of memory. That sounds very boring, but memory might be one of the most important components in your computer.

What is memory exactly?

Memory is anything in a computer that reads and writes data. There’s memory in your processor, in your RAM, and all the way down to your USB drives. “It’s like a pyramid,” Greg Schulz, a storage analyst and operator of StorageIO told Gizmodo. “As you go down the pyramid the capacity is cheaper, but slower.” So the tip of the pyramid is the memory in your CPU, then comes DRAM, then NAND-based flash storage like SSDs, then hard disk drives. At the very bottom would be the oldest and cheapest kind of memory tape drives.

After you understand the pyramid there’s only one other thing you really need to understand. Volatile and non-volatile memory. Volatile memory tends to be faster—it’s DRAM or the stuff built into your CPU. It’s crazy speedy and writes at the smallest possible read/write level: the byte level. Yet volatile memory can’t actual remember anything when it loses power. So the minute you restart your computer volatile memory forgets everything it’s learned.

The first time you open a big program on a computer after a restart, it takes longer than usual. Why? Your computer’s DRAM has forgotten all the crucial info it needs to open the program quickly.

Intel Optane memory is cool because its uses an entirely new entry on the memory pyramid: 3D Xpoint memory. 3D Xpoint slots in right between DRAM and NAND. It’s as fast as the volatile stuff—capable of reading at that crucial byte level—but it’s also persistent. It’s the best of both worlds.

What the is 3D Xpoint memory?

“Since digital memory was created, there’s only been 8 major memories, the most recent being 3D Xpoint,” Schulz said. The last big memory before 3D Xpoint? That was NAND, which was introduced back in 1999. “These things only come around every couple of decades.”

3D Xpoint was announced by Intel and Micron way back in 2015, sixteen years after the last big memory leap. At the time the two companies promised that 3D Xpoint was a thousand times faster than NAND, but just as persistent. Which would mean a whole new ultrafast medium for storing data. Yet it’s taken nearly two years to go from announcing the memory to actually putting it in hardware you and I can buy.

What is Intel Optane memory?

Intel’s Optane memory is the first instance of 3D Xpoint being used in consumer-level products. There’s already a 3D Xpoint storage drive available, taking advantage of its incredible speed, but that drive is also only 375GB and retails for £1,200.

Optane memory is Intel’s shot at giving consumers an affordable taste of 3D Xpoint’s incredible speed. What it does it function as a cache system for your primary storage drive, storing necessary data sort of like RAM might, but holding onto that data in between restarts.

The memory stick fits in the .M2 slot on Optane ready motherboards. Bring your own screw.

If that concept sounds familiar that’s because people have been using faster non-volatile memory as a cache system for the slower stuff for a while now. Notably, Apple has its optional Fusion drive for iMacs. That one combines an SSD and HDD, with the SSD functioning as the cache system while the HDD handles storage. While it is definitely cheaper, and larger, than a solid state drive alone, the speeds don’t quite get to solid state levels.

Seagate’s also introduced such a drive, though it goes with the more generic “hybrid” name. A 2TB hybrid drive with 8GB of onboard flash memory is around £100, but Intel’s new Optane setup is similarly cheap. A 32GB Optane memory stick and 2TB hard disk drive costs just $140. The cost of a 2TB solid state drive? $550.

So why spend $140 instead of $99? Because Intel Optane is really damn fast.

I put Intel’s new hardware through a series of benchmarks to test just how much it could improve the performance of HDDs and SDDs. In the case of the former, it improves speeds so much that you’ll never, ever want to use a Optane-less HDD again. This was best exemplified with Adobe Premiere and Adobe Photoshop. Both apps are notorious for taking forever to open. When I opened a project in Premiere on a regular HDD it took 52 seconds. Opening a huge project in Photoshop took 37 seconds. Yet once I’d activated the 32GB Optane memory chip, those processes took 11 seconds and 7 seconds respectively. Shockingly it actually made the HDD faster than a SSD too, and bizarrely, in the case of Premiere, the HDD with Optane was actually a full two seconds faster than the SSD with Optane.

HDD with Optane inside is crazy fast, and the shorter the bar the better the performance.

Opening projects in Adobe apps gave the Optane memory its most impressive results, but Optane dramatically improved the traditional rotating platter hard disk drive’s performance across the board. The HDD took 5.5 seconds to open Google Chrome, but the HDD with Optane took less than two seconds. Opening a 4K video in Windows’ native video player took six seconds with the HDD, but it took only 1.5 seconds to open it when the Optane memory was enabled. 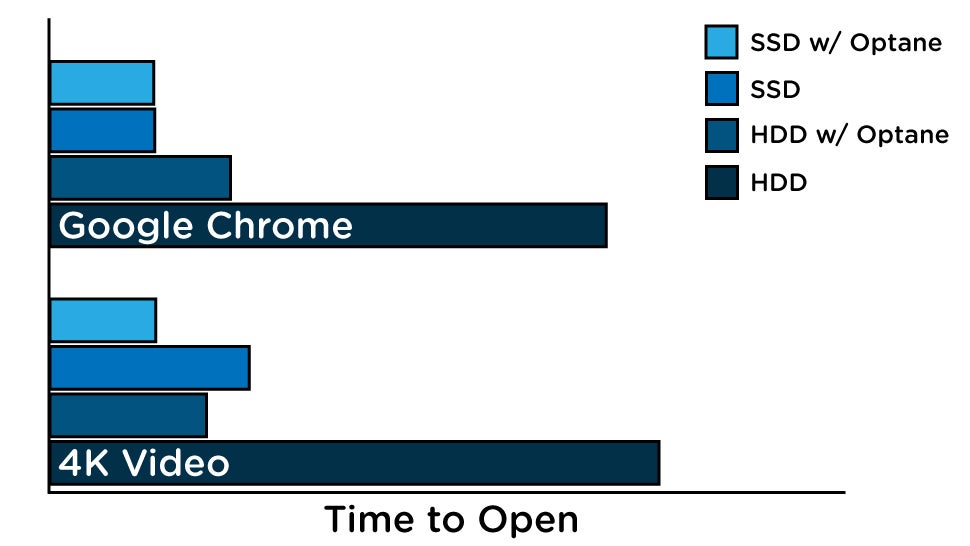 The solid state drive combined with Optane memory didn’t see the same kind of insane performance improvement as the HDD. Indeed in the case of the above productivity tests, the SSD and SSD with Optane memory were neck and neck with no real noticeable difference in speed.

But that changed when we tried loading games. The storage drive has to read a lot more data when opening a video game versus opening an app like Photoshop or Google Chrome, and it takes a lot more time to read that data. Consequently, the insane speed benefits of Optane memory are much more apparent.

When opening Mass Effect Andromeda the Optane memory enabled storage drives were both twice as fast as the drives without Optane memory.

If all your systems run on SSD there’s really no need to go out and drop money on an Optane memory stick. While it can, on occasion, improve the speeds of an SSD it’s not nearly a big enough improvement to warrant spending $44 minimum on Optane memory. Yet if you have a computer where all the systems and apps are on a HDD? Optane memory will make your computing life better.

Unfortunately, there are some pretty damn big caveats. Chief among them is that Optane memory only works with computers that have a seventh generation Intel Kaby Lake processor inside—and Kaby Lake only started shipping very late last year. This means that the big old desktop gathering dust in your garage can’t benefit from Optane memory. In fact, few people can, because Optane memory currently only works with desktop CPUs and motherboards, and Optane compliant motherboards and CPUs only started shipping this year. So unless you’re a computer builder, the benefits of Optane memory are still outside your grasp.

But Intel has assured Gizmodo that we’re going to start seeing a lot of Optane memory enabled desktops and laptops from computer makers later this year. So someday very soon, cheap is no longer going to mean slow. If you see a laptop with an Optane inside sticker slapped on the front, rest assured, that’s a good thing.

Intel Jumps Up and Down Shouting 'We're Here Too' With $15.3 Billion Mobileye Acquisition

What You Need to Know About Ryzen, AMD's Shot at an Intel Killing Chip