By James Whitbrook and Germain Lussier on at

Ever since the first Guardians of the Galaxy movie dropped a hint of Marvel’s quantum magic-flinging hero Adam Warlock, fans have wondered when or if he’d ever join his fellow Guardians on the big screen. But now we know that he’s definitely coming, and when to expect him.

Speaking with director James Gunn and Marvel Studio’s Kevin Feige at a press junket for Guardians of the Galaxy Vol.2, /Film’s Peter Sciretta confirmed that plans are being made to bring Warlock into the Marvel Cinematic Universe after the events of Avengers: Infinity War. Here’s Gunn on the character’s future, courtesy of /Film:

He’s not. He’s not in Infinity War. But he will be a part of the future Marvel cosmic universe and a pretty important part of that.

Gunn doesn’t explicitly mention the third Guardians film to /Film, but given that he himself is developing Warlock’s cinematic debut and announced earlier this week he would return to write and direct Guardians 3, the logical conclusion is that Adam is being saved for Guardians 3. This was indeed confirmed by Kevin Feige, speaking to our very own Germain Lussier at the same junket today:

[Adam Warlock’s arrival] will not be until Guardians 3. Adam is not a part of Infinity War, which of course he is in the comics, but James [Gunn] did always really like Adam Warlock, and our version of Infinity War is the culmination of all the stories we told up to this point.

James has had ideas to introduce Adam—certainly there were ideas in Vol. 2, maybe even in part one, but part two for sure—which were great, but the way the story was coming together, there just wasn’t time for that.

Many fans expected Warlock to perhaps appear in Avengers: Infinity War due to the character’s major role in the original comic book storylines Infinity Gauntlet and Infinity War—in which Warlock helps the heroes of the Marvel universe defeat Thanos and the Infinity Gauntlet, only to take the Gauntlet to safeguard it for himself and accidentally create an evil splinter of his own psyche, Magus. 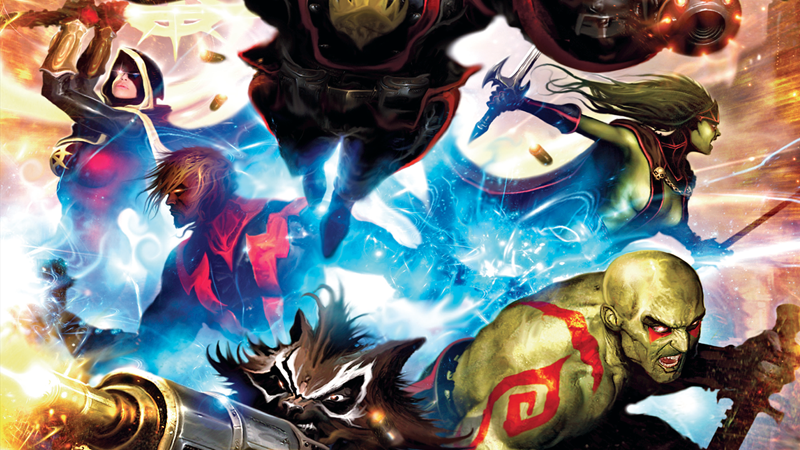 But Adam also has history with the 2008-era Guardians team thanks to Dan Abnett and Andy Lanning’s run on the characters; that brought a new version of Warlock, alongside Phyla-Vell, then the new Quasar, into the fold with Star-Lord, Rocket, and the other characters audiences are now familiar with thanks to the movies. And now, he’ll be reunited with them on the big screen.

Thor: Ragnarok Made Sure There Was No Blue Paint Between Us and Jeff Goldblum's Glorious Performance

Report: The Captain Marvel Movie Has Its Directors