Plants Are Gobbling Up Our Carbon Emissions, But Not Fast Enough

It’s one of the biggest mysteries in this global experiment we’re conducting by pouring 10 billion tons of carbon into the atmosphere each year: What’ll happen to the plants? Will the relentless burning of fossil fuels prompt our leafy green friends to suck down more CO2, tapping the brakes on climate change? Or are the trees unable to bail Earth’s atmosphere out this mess?

Ecologists have spent decades debating the extent of the so-called “CO2 fertilisation effect,” in which adding carbon to the atmosphere stimulates carbon-hungry plants to grow faster, limiting the buildup of heat-trapping gases in our air. Now, thanks to a clever analysis involving Antarctic ice cores, one group of scientists is pretty confident that CO2 fertilisation is taking place globally—and in a big way.

Plants are turning a quarter to a third more CO2 into organic matter than they were at the beginning of the Industrial Revolution, sucking down carbon faster than any other time in the past 54,000 years. The results come from an analysis led by Elliott Campbell of the University of California, Merced and published this week in the journal Nature. The finding points to yet another dramatic, human-caused change in Earth’s biosphere, although the long-term consequences—for plants or people—are far from certain.

“This is a very interesting study,” Trevor Keenan, an earth scientist at Lawrence Berkeley National Lab who was not involved with the study, told Gizmodo. “The results of Campbell et al. suggest an increase in global photosynthesis of 25-35% over the past century, which is huge.”

“You can think of this as a carbon bubble.”

To reach that conclusion, Campbell and his colleagues turned to one of the least plant-friendly environments they could find: Antarctica. At layers of snow compact into ice at our planet’s south pole, they trap air bubbles containing snapshots of the atmosphere at different points in time. The atmospheric records inside ice cores can stretch back millennia—they’re the reason we know, for instance, that modern-day CO2 levels are the highest they’ve been in at least 800,000 years.

But Campbell and his colleagues weren’t interested in CO2. They were after something much weirder: a trace atmospheric gas called carbonyl sulphide, which is just a carbon atom bonded to an oxygen and a sulphur. Carbonyl sulphide is nice because it’s simple. It enters the air when organic matter decomposes in the ocean or gets burned on the land, and it leaves when plants accidentally suck it up as they’re trying to grab CO2 molecules for photosynthesis.

“The swings in carbonyl sulphide are the signature of plant growth,” Campbell explained to Gizmodo. “We knew that the signature should also be in the Antarctic record.” 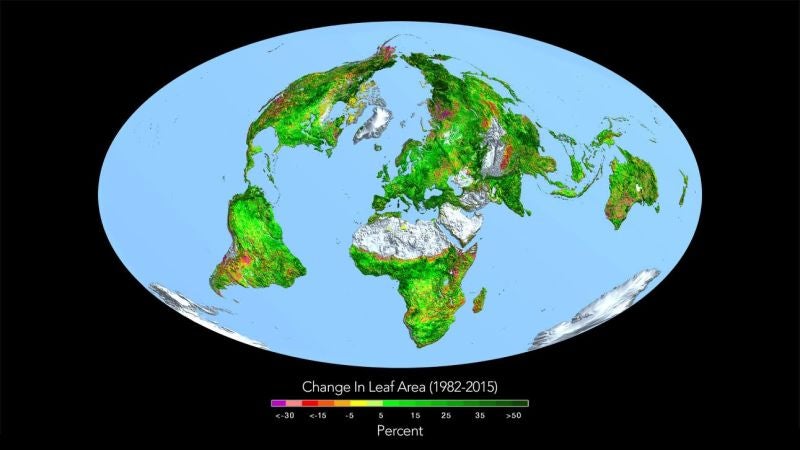 Changes in the greenness of Earth’s surface, according to a satellite analysis published last year. Image: Ranga Myneni

Scientists from NOAA and UC Irvine had already measured carbonyl sulphide in Antarctic snow and ice records dating back 54,000 years. When Campbell and company ran those measurements through computer models to decipher how fluctuations in the gas relate to global plant growth, he found that modern history sticks out like a sore thumb. Since the early 20th century, Campbell’s models point to plants pulling carbonyl sulphide out of the atmosphere at a much faster rate, one that amounts to a 25 to 31 percent uptick in photosynthesis around the world.

It’s some of the strongest evidence yet in support of a widespread, human-induced fertilisation effect, but it isn’t the first hint we’ve had. Satellite measurements published last year indicate a recent uptick in Earth’s overall greenness, although as researchers have noted, plants could be producing more leaves at the expense of fewer roots. Additional evidence that plants really are putting on extra poundage came in a recent Nature Communications study led by Keenan, which attributed a pause in the growth rate of atmospheric CO2 to additional carbon uptake by plants. Campbell’s work falls in line with Keenan’s, suggesting his results might have been conservative—although that’s still up for debate.

“A 25-35% increase since 1900 is on the high end; we predicted a 20% increase since 1900,” Keenan said, noting that some of the the uptick in photosynthesis noted could be due to other factors besides CO2 fertilisation, including forest regrowth and milder temperatures.

Regardless, the CO2 fertilisation effect appears to be real. But that doesn’t mean it’ll be long lived. Plants require a lot of ingredients other than carbon, including sunlight, water, and nitrogen. Eventually, they’ll bump up against some other limitation that keeps their growth in check. What’s more, an overall uptick in photosynthesis does not mean ecosystems all over the world are faring better because we’re driving SUVs and burning coal. Climate change really means change, which includes some parts of the world becoming drier—and less hospitable to life.

“Many models predict that ecosystem will continue to take up more CO2 in the future,” Campbell said. “But some show that climate change could cause plants to hit a threshold. In this case the trend could reverse. You can think of this as a carbon bubble.”

Finally, while we should all go thank a tree for doing us a solid by mopping up some extra carbon, it’s important to note that plants are not keeping pace with the staggering amount of CO2 we dump into the atmosphere each year. As Campbell put it, “humans have clearly overwhelmed this stabilising process.”

Geologists are currently in the midst of a heated debate over whether we’ve entered a new epoch dominated by humans. If plants could talk, they might tell us the Anthropocene has long since arrived.

A Seemingly Harmless Virus Might Be Triggering Celiac Disease