I feel like a lot of tie-in novels today aren’t nearly as balls-to-the-wall crazy as they used to be. Corporations have an unbreakably tight grip on all their properties and everything associated with a successful property is carefully planned out and has the edges filed down. For example, the latest Young Adult X-Files books—prequels starring teen Mulder and Scully—are straightforward but well done. When I was young, however, the kid-targeted X-Files tie-in books were completely insane.

They were insane because they just straight-up novelised episodes of the TV series—a TV series you might remember as often being totally inappropriate for kids aged 8-12. If adult themes were present, then the books simplified them down to make sure the readers absolutely understood them. It was like some crazy thought experiment. “Take this really adult and complicated plot and explain it to a child.”

There were 11 X-Files books written in the ‘90s, and they managed to pick some of the most horrific, traumatising episodes from the entire show to novelise. For instance, the book I remember the clearest was the novelisation of “Squeeze.” A monster of the week episode, “Squeeze” featured Doug Hutchison as Eugene Victor Tooms, a being that had lived without ageing for decades by eating the livers of people he killed. Also, he has the ability to stretch and squeeze himself into impossible spaces.

It is regarded as one of the scarier standalone episodes of the show. And a lot of the scariness is in Hutchinson’s performance, which the book is obviously missing. On the other hand, it devotes pages to Tooms’ crimes, which are deeply disturbing. Five full pages are devoted to a killing that ends like this:

Something was in the house—and it was rushing straight at him. It looked like a man, but it couldn’t be. Whoever—or whatever—it was had eyes that blazed red fire.

Werner never even had the chance to scream. Moving quickly, his attacker stuffed a gag into his mouth. Terrified, Werner tried to fight back. His struggles were useless. His attacker slammed him to the floor with unbelievable force. Werner’s head hit hard. The fight was over.

Thomas Werner was unconscious when Eugene Tooms took what he came for.

I’m pretty sure I read all of this book in one sitting, hoping that the end of the book would give me closure so I could sleep at night. SILLY ME:

Tooms listened to the guard’s footsteps dying away.

His eyes glowed red as he gazed at the light pouring through the narrow slot. A smile crossed Tooms’ face. It was a very narrow opening. Maybe only six inches high and nine inches wide. But that really wasn’t a problem if you knew how to squeeze. . . .

That’s how it ends. Nighty-night, past child me. Don’t let the liver-eating monster who can break in any home bite! This ending remains imprinted on my memory even though I’ve seen the episode a lot more times than I’ve read it.

Here’s that end as it is in the episode:

The constant switching between his face and the hole in the door is almost funny. The way it’s described in the kid’s book? Much more horrifying. I think it’s the word “squeeze” that does it.

Another concession these novels made to their young readers was changing the episode titles into something more kid-friendly. The pilot became X Marks the Spot, a jaunty little pun that in no way covers the fact that it’s about a group of people losing time and remembering being experimented on. “Fearful Symmetry,” which as an episode took its name from William Blake’s poem “The Tyger,” became Tiger, Tiger! “Blood” became Fear. And, my absolute favourite, “War of the Coprophages” became Die Bug, Die! At least here, the new title does capture the humour of the original episode. Maybe it was even on purpose. Again, the more child-friendly titles are weirdly creepier than the original ones.

Remember, these were the book for 8- to 12-year-olds, labeled “middle grade.” There were more proper Young Adult books for young teens which also took the “let’s write down everything that happened in the episode regardless of whether it’s appropriate” track. They included “Our Town,” the episode about cannibalism and a chicken processing plant. The “Oubliette” episode was retitled Empathy, a perfect description for a story about teenage girls being tortured and kidnapped, which is itself a perfect story to adapt for teenagers. Who picked these episodes?

Oh, I also need to share with you the covers, which are so ‘90s that I can’t stand it. The “middle grade” ones are on top, the YA ones on bottom: 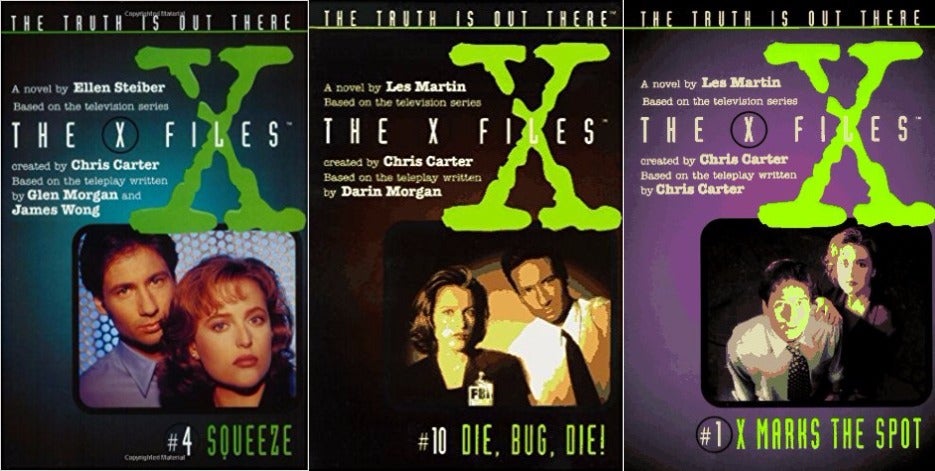 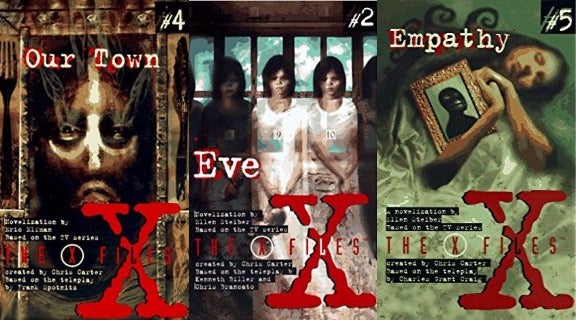 Look, all this obviously worked. I bought them. I think it was partially because I was inhaling anything X-Files-related at the time. I also think it had to do with how I got into the show late, and the books covered episodes I wanted to see but hadn’t yet. DVDs had barely been introduced, and getting a season of TV in any format was really expensive. But a book...

What’s most baffling is that these books could have so easily told new X-Files cases that were for their audience, but didn’t. Well, to be fair, there were a few X-Files novels for adults that did try this tack. (A few of these books were written by prolific Star Wars tie-in novel author Kevin J. Anderson. If there is a tie-in franchise, there he will be. He’s one of the most stable presences of my childhood.) But somehow this idea never occurred to the people making the X-Files books for kids. Instead, they got murder, torture, terrifying monsters, and shockingly accurate episodes descriptions. It’s not that kids don’t love scary things, it’s that there’s a difference between Goosebumps and the sensibility of the show that made “Home.”

WHY?! It’s so baffling on so many levels. I wish I could have been in the mind of the person who saw the popularity of the X-Files and went: yes, let’s do straight-up novelised adaptations of show episodes for children. Again, why? What were they thinking? Who thought these things were okay? Why did they ever exist?!

And why aren’t they in print anymore?

In the New Star Wars Canon, Thrawn Learned About the Emperor From a Shocking Source