When the Hell Will We Find Planet Nine?

The hunt for Planet 9—a hypothetical, Neptune-sized object beyond Pluto—has stirred the scientific community since last year year, when a pair of Caltech astronomers argued in favour of the idea. Those intrepid scientists—Mike Brown, best known as the guy who killed Pluto, and Konstantin Batygin—are currently spearheading a search for this elusive giant. Recently, a network of citizen scientists have followed suit. The problem, of course, is we still haven’t found it. So what’s it going to take?

Back in 2016, Brown and Batygin seemed pretty confident that we’d find the mysterious object sometime in the next few years. From the start, their assertion of a new planet was met with some scepticism, since astronomers (and a few quacks) had been peddling the idea of a “Planet X” for years. At a certain point, it kind of became the “fetch” of the solar system. Still, the researchers’ demonstration that a massive planet could be responsible for the unusual orbits of six known Kuiper Belt Objects motivated the scientific community to take Planet 9 claims more seriously.

“If you say, ‘We have evidence for Planet X,’ almost any astronomer will say, ‘This again? These guys are clearly crazy.’ I would, too,” Brown told Science Magazine in January 2016 shortly after the paper detailing their hypothesis went public. “Why is this different? This is different because this time we’re right.”

Over the past year, Brown and Batgyin have expanded their search team, and are currently gearing up for observations in the fall. According to Brown, the “wrong side of the sky” is up right now, meaning the part of the sky where Planet 9 might be is only visible in the daytime, which is rather inconvenient when you’re trying to make a breakthrough in planetary science.

“What we spent most of the last year doing has been trying to do a combination of computer modelling and looking at the real objects in the solar system and really pinpoint where it is,” Brown told Gizmodo. “We have a modestly precise region where we know to look. It’s about 800 square degrees of sky, which is a pretty large swath of sky, but it’s better than having to look at the whole thing.” 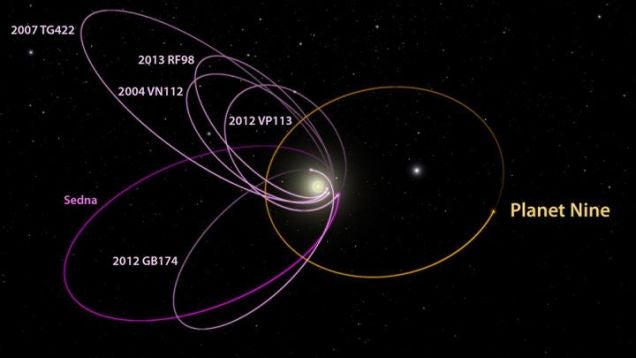 Another boon for the planet hunters is that their support network is huge. In a new project called Backyard World, a network of citizen scientists can look through troves of “flipbook” movies made from images captured by NASA’s Wide-field Infrared Survey Explorer (WISE) mission with the hopes of finding Planet 9, which astronomers say will look a little blue.

“I am very optimistic that we’re going to track this guy down soon because so many people are looking,” Brown said. “And we’ve done a pretty good job of nailing down where to look.”

“Why is this different? This is different because this time we’re right.”

Still, not everyone is confident that Planet 9 will be found any time soon—or at all. A new study from a team of scientists at Queen’s University in Belfast asserts that the discovery of a minor planet called 2013 SY99—which is, at its closest, 50 AU—might dash our hopes of ever discovering the world. After running computer models of the solar system, the researchers concluded that if Planet 9 did exist, it likely would have altered SY99's orbit so much we would not be able to view it.

“Computer models do show that a Planet Nine would be an unfriendly neighbour to tiny worlds like SY99: its gravitational influence would starkly change its orbit – throwing it from the solar system entirely, or poking it into an orbit so highly inclined and distant that we wouldn’t be able to see it,” Michele Bannister, an author on the study, wrote in The Conversation. “SY99 would have to be one of an utterly vast throng of small worlds, continuously being sucked in and cast out by the planet.”

Bannister told Gizmodo that while her team’s findings don’t entirely disprove the idea of Planet 9, it calls the hypothetical world’s legitimacy into question.

“The planet 9 idea is a fun idea, it’s exciting, but it’s taking a bit of the oxygen at the moment,” she told Gizmodo. “We have this interesting problem…and the very shiny solution at the moment is called planet 9.”

Brown, on the other hand, read Bannister’s paper and said he and Batgyin had predicted that astronomers would discover objects just like SY99. He said that finding these objects actually reinforces the idea that Planet 9 is out there.

“Honestly, if I could control the future, I would have one of those citizen science projects find Planet 9.”

“The reason that we initially thought Planet 9 existed—there are a lot more reasons now—but the initial reasons were that the most distant Kuiper Belt objects were on these very eccentric orbits that are all pointing off in the same direction,” he told Gizmodo. “One of the things we said when we first announced this a year ago was that, ‘We predict that as you continue to find more and more distant Kuiper Belt objects, they too will be pushed off in this one direction. So we’ve been waiting for all these discoveries to come in—this one is exactly where it’s predicted.”

It’s so rare we get planetary drama as delicious as this one with Planet 9. But seriously, if this big guy is out there, it’s only a matter of time until someone finds him. Brown hopes it’ll be one of the citizen scientists.

“I love those,” he said. “Honestly, if I could control the future, I would have one of those citizen science projects find Planet 9. It’d be fun to find it myself...but it’d be cool if we could come up with new ways of finding these things like using the power of citizen scientists and data analysis. I would love that story.”

Europe Wants China to Pay for a Moon Base

Scientists Are Already Planning the Next Mission to Pluto

How to Watch the Spectacular Eta Aquarid Meteor Shower