We’re not doing such a great job solving the whole climate change problem, which is why some experts think it’s time to study more radical tactics. The notion of geoengineering—hacking the climate to cool the planet—is controversial, awe-inspiring, and to many, terrifying. And yet, despite their own grave concerns with the idea, a group of researchers believes the time has come to explore whether planet-hacking might really work.

Earlier this month, Harvard University officially launched a Solar Geoengineering Research Program, which brings together academics from the hard and social sciences to explore the feasibility of stalling global warming by altering the composition of the stratosphere to block incoming sunlight. If you think this sounds extremely risky and a tad dystopian, you’re in good company: The researchers themselves are terrified of what solar engineering could lead to. But when it comes to studying the idea, they say we have to weigh risk versus reward. And frankly, the risks of unchecked climate change are also pretty scary.

“The research we want to do is to better quantify the risks of stratospheric geoengineering,” Frank Keutsch, an atmospheric scientist at Harvard involved with ongoing geoengineering experiments, told Gizmodo. “We want to choose knowledge over ignorance.”

Planet-hacking, as a concept, has been around for decades. Ideas for how to cool the Earth with technology run the gamut from dumping a bunch of iron filings in the ocean to stimulate carbon-hungry phytoplankton, to making Earth’s clouds more reflective by seeding them with light-scattering particles, to sticking a giant solar reflector up into space. But with the exception of a few small-scale field tests (and at least one very illegal experiment), these science-fictional ideas have lived within the confines of computer models, laboratory experiments, and conferences attended by a niche community of researchers.

“We want to choose knowledge over ignorance.”

The establishment of the new Harvard programme, which has raised over $7 million in seed funding so far and is backed by tech luminaries like Bill Gates, is a clear sign that geoengineering has broken into the mainstream. Notably, the programme’s launch coincided with the announcement of a Harvard-led field experiment that will begin to test one of the most widely-discussed planet-hacking ideas of all: solar engineering, or injecting shiny particles into Earth’s stratosphere to bounce back sunlight.

It’s a concept that draws inspiration from one of the most awe-inspiring natural processes on Earth—the volcanic eruptions that periodically belch vast plumes of sulphur dioxide gas into the stratosphere. Once airborne, SO2 gets converted into sulphate particles, which can spread out across the globe, scattering enough sunlight to produce a noticeable dip in Earth’s average temperatures. This phenomenon was most recently demonstrated by the Mount Pinatubo eruption in 1991, which cooled the oceans enough to briefly depress global sea levels, according to a paper published last year.

But in addition to cooling the planet, sulphate particles can have a slew of unwanted side effects in the stratosphere. For one, they can also absorb solar radiation, and infrared heat from the Earth itself. Worse, sulphate aerosols trigger a series of chemical reactions that destroy ozone, which protects us from the sun’s most harmful ultraviolet rays. 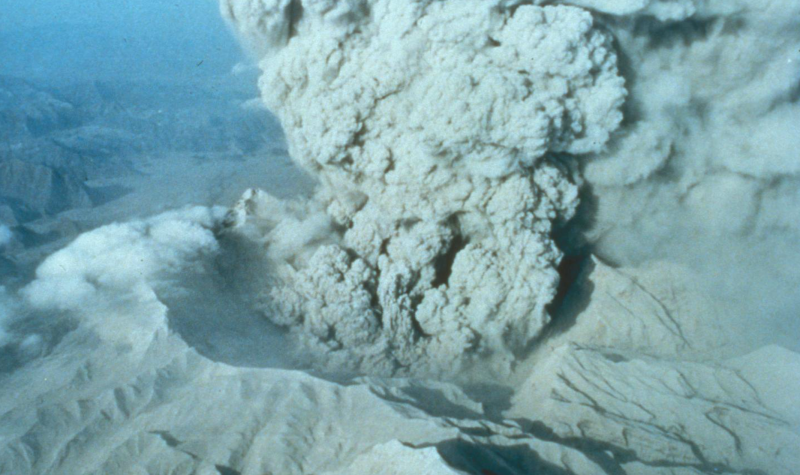 The smoking caldera of Mount Pinatubo on June 22, 1991. Image: USGS

Keutsch, who is collaborating on the experimental portion of Harvard’s solar engineering efforts alongside physicist David Keith, is interested in identifying particles with a comparable amount of light scattering to sulphate, but fewer unwanted side effects. They’ve been experimenting in the lab for several years, studying the properties of test substances like calcium carbonate under experiments that mimic the low temperatures, low pressures, and next, high UV radiation of Earth’s stratosphere.

But nothing beats a field test, which is where Keutsch and his crew have their sights set next with a Stratospheric Controlled Perturbation Experiment (SCoPEx).

“[With] laboratory experiments, you never know if you’re reproducing all aspects of the real environment faithfully,” Keutsch said. “As we’re finishing lab experiments, [we are] trying to design an experimental system that’ll do those experiments in the stratosphere.”

The SCoPEx experiment, which could start as early as next spring, consists of a balloon that would launch from a test site near Tuscon, Arizona, and spray a kilogram or less of a test material into the stratosphere to produce a small cloud, roughly a kilometre long and 100 metres wide. After the injection, researchers would remotely steer the balloon back and forth through the cloud, monitoring what happens to the material and the air the particles are introduced to over the course of 24 hours. Initially, they’ll do a dry run with water vapour, moving onto other substances like calcium carbonate and sulphate if the equipment all seems to be working.

If field tests go well, and the team identifies a promising material, the next step would be to go back to the lab and do ageing experiments, to see what their particles looks like after a few years in the sky, Heusch said.

Although cloud seeding to control regional weather has been pursued for over half a century, there has never been an injection of particles into the stratosphere for the explicit purpose of testing solar engineering, which might one day be used to alter weather patterns globally. Heusch sincerely hopes that technology like this never has to be deployed. “The idea of trying to do something like that is really, quite terrifying,” he said.

To avoid any harmful outcomes, researchers are taking things one tiny step at a time. But some critics argue that solar engineering technology that should never be developed, period—that it’s too risky, that it’ll draw funding away from basic climate science, or that society will come to see solar engineering as a silver bullet solution. It isn’t.

“The big task is to do what we have to get CO2 emissions down to zero and below zero,” Gernot Wagner, a political scientist and executive director of Harvard’s Solar Geoengineering Research Program, told Gizmodo. “One question is, how will what we do here [with solar engineering] interact with society’s willingness and desire to mitigate?” In other words, will the mere act of exploring geoengineering distract us from the monumental tasks of cutting carbon pollution and preparing the rising seas?

To put that moral hazard in simple terms, Wagner uses an analogy to medicine. If a patient is prescribed Lipitor to reduce his risk of getting a heart attack, he’s got two options. He can take the doctor’s medicine, keep eating bacon-covered donuts every day, and hope for the best. Or, he can take the mere fact he was prescribed Lipitor as a wake up call that some serious lifestyle adjustments are needed.

Right now, human civilisation is a bit like a patient who eats crisps and sits on the sofa all day farting. If the planet doctors come up with a miraculous geoengineering treatment that stalls the effects of climate change—even though it does nothing about the buildup of greenhouse gases that triggered the problem—will humanity use that as license to keep burning coal like there’s no tomorrow?

Wagner hopes not. But it’s something he plans to investigate. “For some people, it’ll go one way, for some, the other way,” he said. “The big question is, what does society overall think? That’s an empirical question we don’t know the answer to.”

Ken Caldeira, a climate scientist at the Carnegie Institute for Science who has been involved in planet-hacking discussions since the early 2000s, says the argument that we shouldn’t fund geoengineering research at all because it’ll draw research money away from climate science and adaption has fallen by the wayside. “This is not surprising because one can think about solar geoengineering as a form of radical adaptation to high atmospheric greenhouse gas concentrations,” he told Gizmodo. “That said, there are many who would not like to see more than a small fraction of the climate budget allocated to this activity.”

“In isolation, solar geoengineering is terrifying. You might even describe it as nuts. The question is, nuts compared to what?

It sounds like a subtle concession, but in reality we’re witnessing a monumental shift in attitudes toward what geoengineering. And perhaps that shift shouldn’t come as a surprise: After all, humans are still pouring roughly ten billions of tonnes of carbon into the atmosphere each year, a rate unprecedented since the extinction of the dinosaurs. The USA is considering abandoning the Paris Agreement. We’re locking ourselves into sea level rise, ocean acidification, and other climate change impacts that won’t just affect our kids and grandkids, but potentially, every living thing for thousands of years to come.

If right now isn’t the right time to explore any and all mitigation options, then when?

“In isolation, solar geoengineering is terrifying,” Wagner said. “You might even describe it as nuts. The question is, nuts compared to what? Or terrifying compared to what? The world we’re heading toward, with more or less unmitigated climate change, is that itself terrifying? This is where context matters.”

We Just Found Out Antarctica Is Covered in Rivers