Cassini's Second Grand Finale Dive Might Be Outshining the First One

Cassini’s six-month-long Grand Finale mission has become the unofficial nerd Super Bowl: each time the NASA-led spacecraft drops a new batch of raw images, we jump to our computers and frantically scroll through to find the best. (Actually, we never leave our computers, because we are nerds.) But in any case, the raw photos from Cassini’s second dive into the gap between Saturn and its rings are now available—and honestly, they might even be better than the first round.

On May 2nd, Cassini performed the second part of its final act, diving into the eerie void between Saturn and its rings at 8:38 PM BST. With 20 dives left before the spacecraft plunges itself into Saturn’s atmosphere on September 15th, it’s hard to imagine anything can get better than these images of Saturn’s rings:

This one looks like the cover of a Strokes album!

A little smaller, but stunning nonetheless: 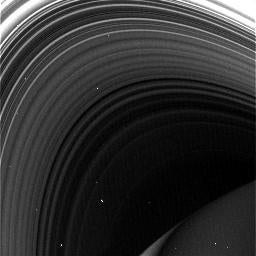 To be fair, Cassini did some incredible work on its first dive. This video from NASA pieced together rapid fire images taken from Cassini during its first Grand Finale dive. It begins with a deep look into the vortex at Saturn’s north pole, then travels southward as the spacecraft’s altitude drops from more than 40,000 to just 4,200 miles above Saturn’s cloud tops. The result is damn impressive:

Cassini’s will perform her third dive between Saturn and its rings on May 9th. We can’t wait to see what she brings back next.

SpaceX Just Performed Its Most Mysterious Mission Yet