The fidget spinner is a global phenomenon that has inspired thinkpieces about cultural anxiety, the changing retail landscape, and above all, whether or not it should be allowed in the classroom. Many teachers have embraced the toy as a tool for kids with attention problems but we have some bad news: They’re evolving.

Some research has suggested that the fidget toys really do improve the performance of students with ADHD. Parents have flipped out when schools tried to ban them. And if you need any further proof of the growing acceptance of the toys as a learning aid, just check out this classroom worksheet that’s distributed by Your Modern Family: 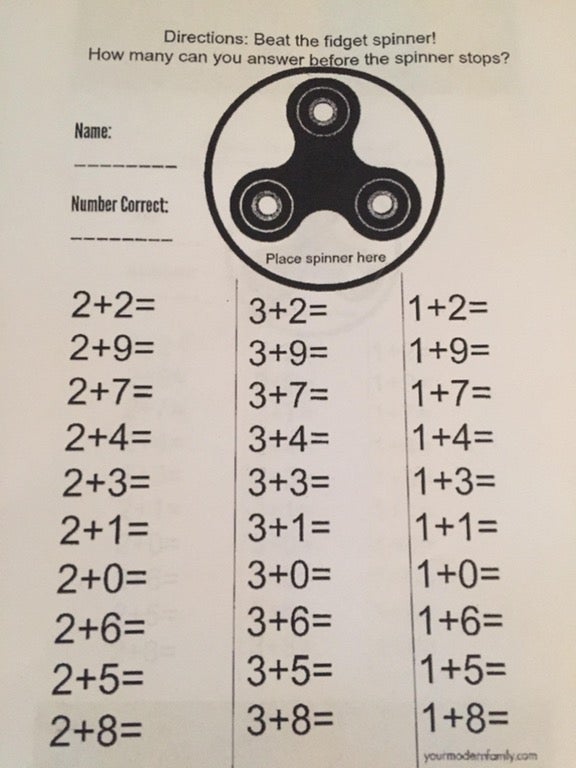 If the worksheet’s purpose is unclear, the kid is encouraged to place their fidget spinner at the top, give it a flick, and then complete as many arithmetic problems as possible before it stops spinning.

The Spaztix Programmable Customizable LED Long Spinning Fidget Finger Spinner (ugh) allows users to display text messages and colourful patterns on it by sending commands from an Android phone app. So teachers can deal with confiscating phones, as well as explaining why this spinner isn’t allowed, but the others are totally kosher. My favourite part of this variant is that it’s still sticking with the message that it’s good for you. It’s Amazon listing insists that you shouldn’t “be deceived by their fun looks; these spinning fidget toys are actually backed by science! By feeding your brain extra sensory information, you redirect your mental resources from whatever else you may be thinking to the task at hand.”

Statistics blog FiveThirtyEight declared the spinner boom officially over, just yesterday. It seems safe to say this flashing, phone-connected, potential cheat machine is the final nail in the coffin.

The Coolest Hardware Shown Off at E3 2017

Gamers Love Nostalgia, So Someone Is Bringing Back the Original Xbox's Gigantic Controllers