Uh, Apple, Did You Think This Through?

The crowd cheered in California on Monday, when Apple announced HomePod, a new smart speaker armed with Siri, the company’s virtual assistant. Minutes later, an image of the product appeared on Apple’s website and, well, holy shit, it looks just like HAL 9000! Is Apple fucking with us?

The resemblance is almost too uncanny. Of course, the new HomePod doesn’t normally look like an all-seeing eye of artificially intelligent doom. The promo shot on the Apple Store website, shows a bird’s eye view of the speaker which features the colorful Siri waveform in the center. Apple says this dynamic image “appears on the top to indicate when Siri is engaged” and the surface offers “integrated touch controls also allow easy navigation.” In other words, the glowing orb responds, when you’re talking to it, just like HAL 9000. 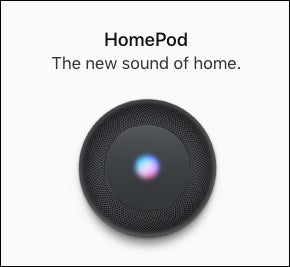 It’s almost impossible to imagine that Apple overlooked the resemblance between this view of the HomePod and the murderous AI from Stanley Kubrick’s space opera, 2001: A Space Odyssey. It wouldn’t even be the first time that Apple’s nodded at HAL. Back in 2011, when Apple first released Siri, you could ask the virtual assistant to “open the pod bay doors,” and Siri would sometimes respond, “We intelligent agents will never live that down, apparently.” Sometimes Siri would even quote HAL and say, “I’m sorry, Adam, I’m afraid I can’t do that.” Which is funny because that’s the point in the film, where the main character realizes the robot is trying to kill him.

Jokes aside, the HAL 9000 visual reference does remind us that Apple now wants to install artificial intelligence and microphones into homes around the world. According to Apple, the HomePod only sends audio back to its servers once you’ve said “Hey Siri,” and even then, the data is encrypted. Nevertheless, it’s unclear exactly how much of your behavioural data Apple is recording and storing with the latest Siri updates, although the company says this data is stored locally on the Siri-powered device.

So it’s not like your HomePod is going to go haywire, lock all the doors, and refuse to let you turn the lights on. But if you’ve seen 2001, you know that artificial intelligence can develop a mind of its own.

You're probably going to want it, if you're an Apple fan.

Many bezels were sacrificed to make this iPad happen, and we won’t know if the exchange was worth it until we get our hands on one.

iOS 11: All the Cool New Features Coming to Your iPhone and iPad

Can you believe Apple’s iOS is 11 iterations old already?

Here Are All of the New Upgrades to Siri

If you’re someone who’s constantly talking to Siri on your phone, you might be shocked by some of the big changes coming to the digital assistant.