A Breakdown of All the Clues, '80s References, and Surprises in the Ready Player One Trailer

The debut trailer for Ready Player One came out during San Diego Comic-Con, and it gave Gunters and newbies alike a lot to look forward to. It’s full of footage that hints how Steven Spielberg’s adaptation will stay faithful to, and stray away from, Ernest Cline’s nerdy novel. We’ve broken it all down for you, and here’s everything we found.

The trailer opens on the stacks in Columbus, Ohio (instead of Oklahoma City, like in the books), a series of trailers that are obviously and literally stacked on top of each other. In the novel, global warming has left coastal areas uninhabitable, so people have crowded into the middle of the country. Columbus is also the location of the big evil corporation of the story, Innovative Online Industries.

We see our hero Wade Owen Watts (Tye Sheridan) running through the stacks, likely heading to his secret van where he’s hidden his headset for OASIS, an immense virtual reality world. In voiceover, Wade reveals that he wishes he was born in the 1980s. He, along with all other youth, are the “Lost Generation,” using virtual reality as an escape from the pains of the real world.

We also see a woman in a headset pole dancing, which probably means she’s making money dancing in OASIS. In the world of Ready Player One, a lot of jobs are done in virtual reality, especially sex work. Wade’s mum, for example, worked for a virtual sex hotline before she died. 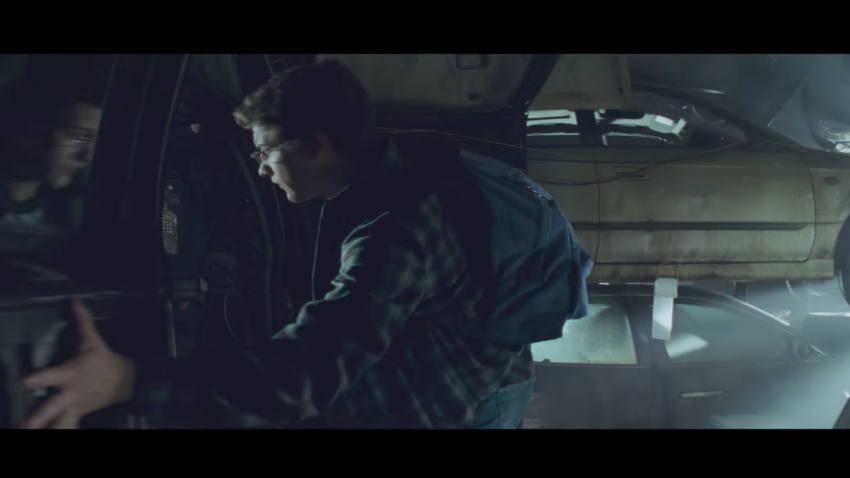 Wade going into his secret van. Note the toilet paper roll. (Everybody poops.)

Here we see Wade turning on his VR rig, which scans his face to confirm his identity; then he puts on a pair of “haptic gloves” and straps a belt to his waist. Wade, like millions of other people, has spent years trying to win Anorak’s Game, a series of puzzles created by James Halliday, the founder of OASIS, who is presumed dead. Halliday has offered ownership of the VR company to whoever can solve find Anorak’s Treasure, much like Willy Wonka and his chocolate factory.

Wade putts on his VR headset and enters the OASIS. Note how the gloves and headset say “IOI” on them; that means they’re from Innovative Online Industries. In the book, IOI is a corporation trying to seize control of the OASIS by winning Anorak’s Game, but they could play a bigger role in the day-to-day operations in the movie.

Welcome to the OASIS.

And here come the references! This is Wade (using his username Parzival) entering OASIS co-founder Ogden Morrow’s (Simon Pegg) annual birthday party at the Distracted Globe. On the left you see characters with Harley Quinn and Deathstroke avatars. They stare at Parzival as he enters the room; by this time in the film, he’s one of the top players in Anorak’s Game. The music that starts here and plays throughout the trailer also references the score from Willy Wonka and the Chocolate Factory, but that’s probably just for this trailer. 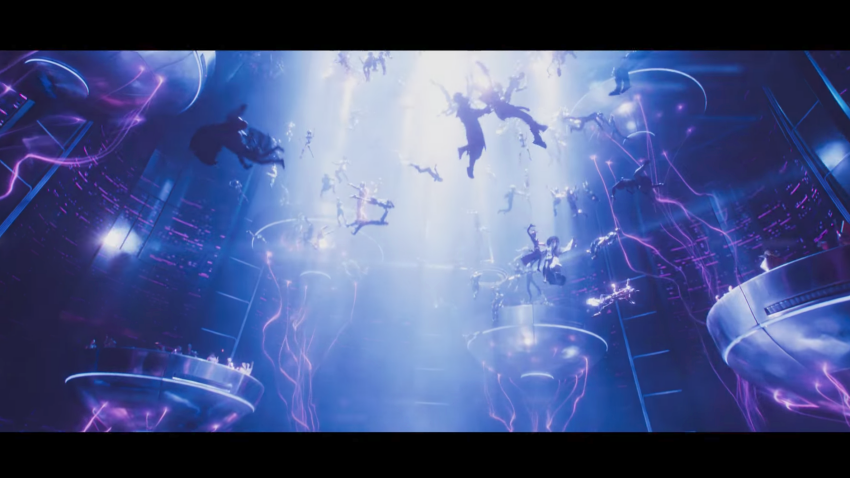 A closer look at the zero-gravity dance floor. There’s a guy dressed as Gandalf dancing with the crowd. In the book, Ogden’s avatar is dressed as Gandalf... but it’s unclear if this is him or if he’s DJing in the booth seen in the previous gif.

This could either be Japanese brothers Daito and Shoto leaving a quest, or Parzival and Shoto (who looks a bit like Deadpool but is more likely just in his samurai gear) getting ready for the final battle. It looks like they’re outside the the Temple of Syrinx, the location of the third and final key for Anorak’s Game, the Crystal Key. As per the book, the players were rewarded after finding the key with their own giant robot. Based on this shot, I’m guessing one of them went with the Iron Giant. Smart choice. 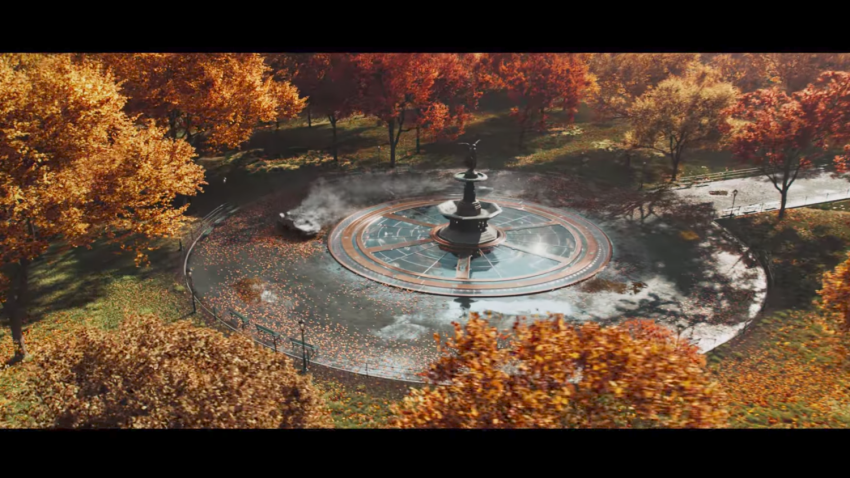 A shot of the Back to the Future DeLorean racing around what looks like the Bethesda Terrace and Fountain in Central Park. This could be a flashback from Anorak’s past, but more likely it’s part of the big race seen in later parts of the trailer.

Based on the trailer, the challenges to get the three keys for Anorak’s Game will be vastly different from in the book. Case in point, this looks like a more action-packed version of the Joust tournament, which was how Wade got the Copper Key. You can see the scorpion grab an ostrich and turn it into an egg. It’s also possible this and other shots are from the final siege at the end of the story.

Here’s Aech (Lena Waithe), Wade’s in-game BFF, fighting Freddy Krueger, Duke Nukem, and an unclear enemy. Note how Krueger turns into a bunch of coins after being destroyed, which Aech turns around and collects. 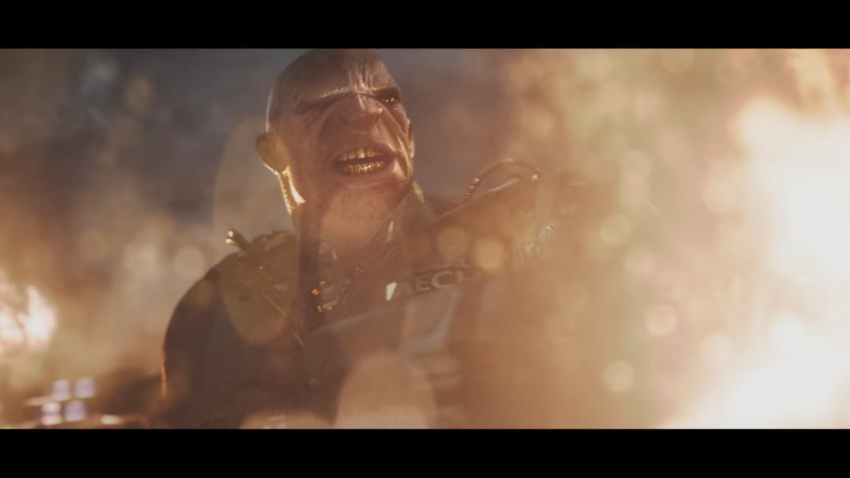 Here’s a close-up of Aech (you can see the name tag), whose avatar is obviously a giant orc.

A montage of the “Sixers,” the Innovative Online Industries employees who, collectively, are trying to beat Anorak’s Game on behalf of the giant corporation. They’re bad guys in this story, the corporate shills being paid to win the game while characters like Wade and Aech are doing it for love. I like the decision to turn all their avatars into robots, though. On the right, there’s Stephen King’s killer car Christine, as well as the A-Team van. 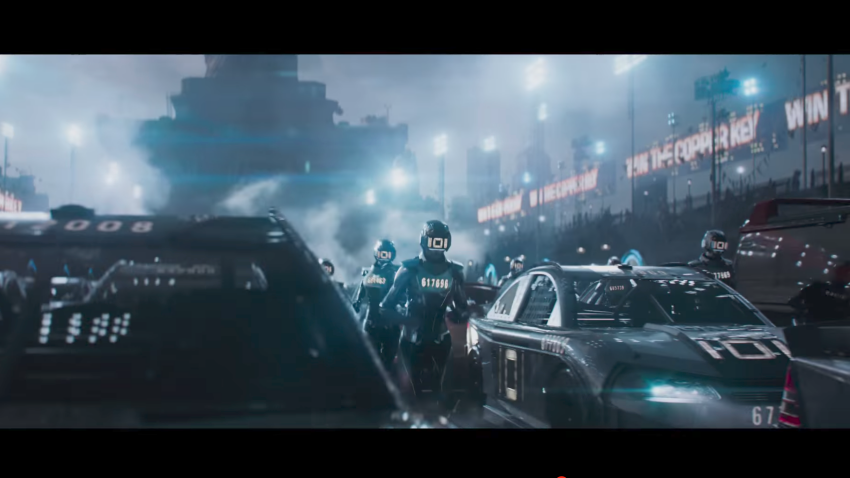 This is most likely the race to get the Copper Key, the first object a player needs to find in Anorak’s game. You also get a close-up of the “Sixers,” so-named because their avatars are a string of numbers that always start with six. Rumour is this is one of first scenes—if not the first scene—in the movie.

The race begins! Aech has a monster truck. 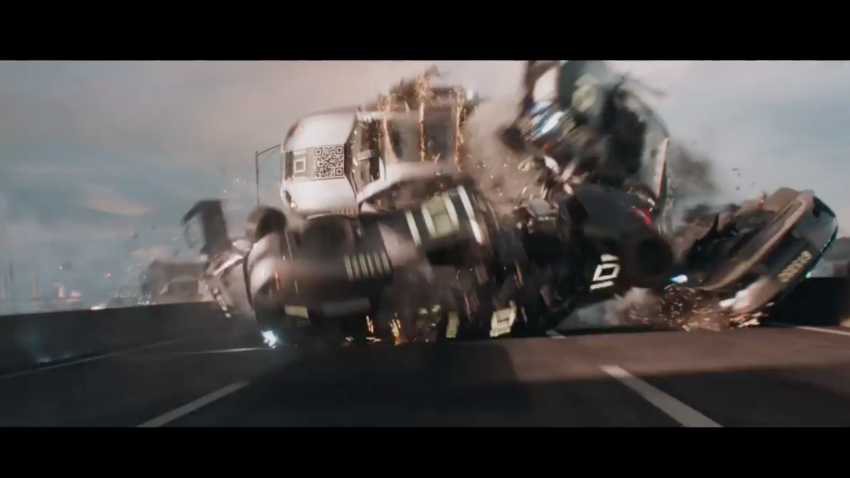 If you pause you see a QR code on the top of one of the vehicles. It’s a real code that takes you to a recruitment website for IOI. 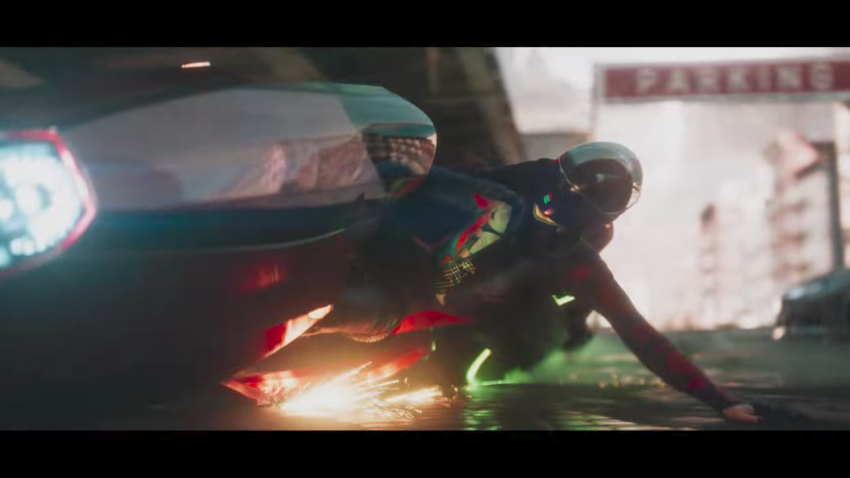 Ready Player One author Ernest Cline confirmed during San Diego Comic-Con that this is Art3mis, played by Olivia Cooke. She’s racing on the motorcycle from Akira, complete with Hello Kitty stickers.

This is Wade (as Parzival) racing through the streets of digital New York City in his DeLorean—customised with KITT from Knight Rider. There are a few Easter eggs found in this scene: The DeLorean’s license plate says “PARZIVAL,” and the dashboard inside reads Feb. 11, 2045, the day Wade found the Copper Key in the novel. Plus, on one of the buildings, you can barely make out Gregarious Bank, referencing the Gregarious Simulation Systems, the original company behind the OASIS. 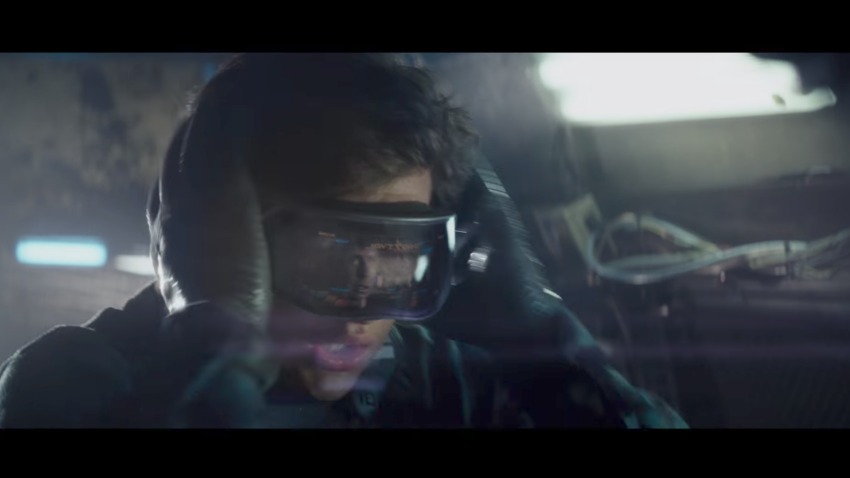 In the real world, Wade is freaking out. If you look in the visor, you can see an image of Nolan Sorrento (Ben Mendelsohn), IOI’s head of operations. This is likely Wade leaving the meeting where Sorrento tried and failed to recruit him to IOI, after which Sorrento blows up his “stack,” killing hundreds of people (including his family). 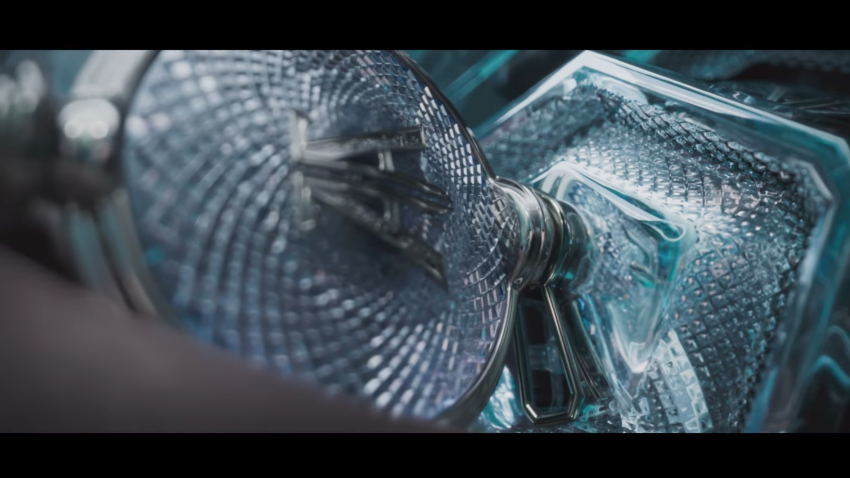 And the trailer cryptically ends on the Crystal Key.

Anything else you spotted in this trailer? Any other characters or references? As always, tell us what you saw in the comments below.

Ready Player One comes out sometime in 2018.

Which Characters in the Marvel Cinematic Universe Do You Think Are Secretly Skrulls?