Nearly 90,000 Sex Bots Invaded Twitter in 'One of the Largest Malicious Campaigns Ever Recorded on a Social Network'

ZeroFOX’s research into SIREN offers a rare glimpse into how efficient scammers have become at bypassing Twitter’s anti-spam techniques. Further, it demonstrates how effective these types of botnets can be: The since-deleted accounts collectively generated upwards of 30 million clicks—easily trackable since the links all used Google’s URL shortening service. 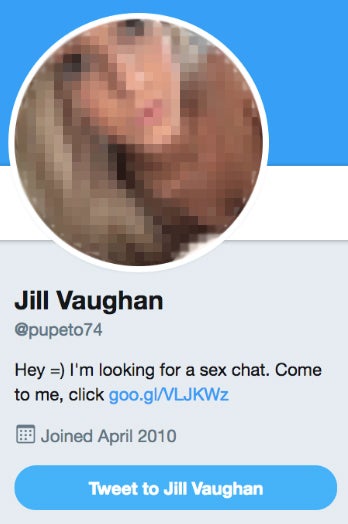 The 90,000 accounts were all created using roughly the same formula: A profile picture of a stereotypically attractive young woman whose tweets included sexually suggestive, if not poorly written remarks that invite users to “meet” with them for a “sex chat.” Millions of users apparently fell for the ruse and, presumably, a small fraction of went on to provide their payment card information to the pornographic websites they were lured to.

“The accounts either engage directly with a target by quoting one of their tweets or attracting targets to the payload visible on their profile bio or pinned tweet,” ZeroFOX reports. Roughly 20 percent of the accounts lay dormant for a year before sending their first tweets, an effort to evade Twitter’s anti-spam detection.

Here’s just a brief sample of the hilariously bad tweets generated by these obviously fake accounts:

According to ZeroFOX, two out of five of the domains tweeted by the SIREN botnet are associated with a company called Deniro Marketing. Deniro Marketing was identified earlier this year by noted security researcher Brian Krebs as being tied to a “porn-pimping spam botnet.” (Krebs also filed a report Monday regarding ZeroFOX’s discovery.) The company reportedly settled a lawsuit in 2010 for an undisclosed sum after being accused of operating an online dating service overrun with fake profiles of young women.

A Deniro Marketing employee who answered the phone at its California headquarters on Monday said that no one was available to respond to inquiries from reporters.

While it seems unlikely that Deniro Marketing created the fake accounts itself, it may have contracted a third party—likely located somewhere in Russia or Eastern Europe—to spread the links for them. A “large chunk” of the accounts’ self-declared languages were Russian, ZeroFOX reports, and approximately 12.5 percent of the bot names contained letters from the Cyrillic alphabet.

“To our knowledge, the botnet is one of the largest malicious campaigns ever recorded on a social network,” ZeroFox concludes. Luckily, none of the links tweeted by the SIREN botnet appear to contain malware, nor were any associated with phishing attempts. But with more than 30 million clicks, the discovery reveals what a threat such an operation could be if the goal were shifted slightly to include, for example, the spread of ransomware.

Twitter Has Some Advice For Avoiding Game of Thrones Spoilers

Twitter has offered a reminder about its mute function as well some key terms to add so that you can block yourself from being spoiled.

How to Back Up All of Your Online Accounts Offline

Here’s how to make sure you’ve got local copies of everything.

Permanently, as an incentive so that you might like it and pay to have it every month.