Spider-Man: Homecoming Review: Proving How Good Skipping the Origin Story Can Be

Spider-Man: Homecoming is not your typical Marvel movie—and that’s exactly what makes it great.

Directed by relative newcomer Jon Watts, Spider-Man: Homecoming is almost goofy. It’s weird, wholesome, and there’s an almost unpolished feel to it, especially in the film’s early scenes. A lot of the movie is about kids who do a lot of dumb stuff. It all establishes a tone that instantly distinguishes Homecoming from almost all modern superhero movies.

The film’s energetic, youthful drive is due in large part by Tom Holland’s performance as Peter Parker. He’s a younger, more enthusiastic, and much more awkward version of the character than we’re used to seeing. This is a kid who has no idea what he’s doing, but he’s ambitious, brave, and full of good intentions. So even when his life takes a turn for the worst (in true Spider-Man fashion), Holland’s Parker has a certain joy and naivety.

Watts and the other five writers credited on the film build up Peter Parker in a fresh way—no small feat given this is the third Spidey since 2002. Happily, we don’t see him get bitten by the spider or Uncle Ben die. He’s already webslinging right when the movie begins, so it’s more about Peter Parker/Spider-Man growing into the hero we know and love. He makes mistakes, takes risks, gets bumps and bruises, and more. For part of the film, he’s actually a pretty bad Spider-Man. And that’s not something you see a lot of in superhero movies these days, either—a hero struggling to be heroic—which makes Homecoming even more unique. 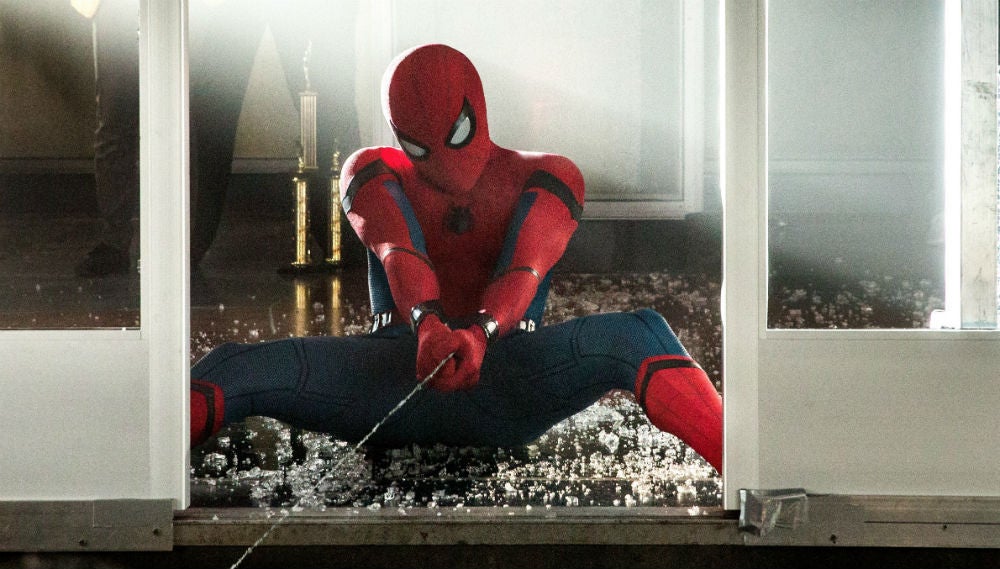 It also helps immensely that, as the film begins, Peter Parker is coming home from the events of Captain America: Civil War to a relatively quiet home life. A life where that innocence and sense of wonder at being a superhero exists without those graver distractions that affects the other heroes of the Marvel Cinematic Universe. Those movies—and virtually all superhero films, really—have a distinct gravity to them, a weighty seriousness that pervades them, no matter how many one-liners get delivered. But for the most part, Spider-Man: Homecoming doesn’t have that solemnity; it’s more like an episode of Freaks and Geeks that happens to have a superhero in it.

Of course, yet another thing that helps Holland’s Spidey stand out from his spider-forebearers is that he lives in the Marvel Cinematic Universe, and boy, does the film lean into that. Most of the plot is driven by MCU connections, including Peter’s role in Civil War, but also the fallout of the battles from the other movies. In fact, the film’s villain, the Vulture, played with a great mix of darkness and realness by Michael Keaton, makes his living stealing the technology from the bad guys of the other movies. Every time the Vulture and his gang are on-screen, Homecoming feels like a completely different, much grimmer movie, wholly separate from Peter Parker’s story.

That disconnect is slightly jarring at first, but the film slowly, surreptitiously builds up to an end that is anything but goofy or frivolous. The two stories slowly come together, and the film’s early, intentional awkwardness transitions into its serious, high-stakes finale perfectly. It’s like putting in the final piece of a puzzle. Suddenly all that gee-whiz innocence and frivolous humour comes into crystal-clear focus, as Peter discovers that being Spider-Man isn’t just for fun; he really has a great responsibility, and there are real-life consequences if he fails. And the film progresses from there magnificently.

Spider-Man: Homecoming is a movie that not only grows on you, it practically grows up in front of you. Watching a superhero movie on this scale that’s about a teenage kid at first feels odd, because it’s so unusual. But for everything Marvel Studios’ first Spider-Man movie accomplishes, including that distinction, it deserves to be discussed among the better films in the MCU.