What You Can Actually Do to Fight Climate Change, According to Science

There’s no doubt that if we’re going to stop or even slow down climate change, we have to get our collective shit together. But collective action starts with individual choices, and for all the data-driven decision makers out there, the path forward just got a bit more lucid. A new study in Environmental Research Letters has determined exactly which life choices reduce our carbon footprints the most.

Many folks concerned about the climate advocate for national and international policies to reduce humanity’s collective carbon exhale. But a pair of researchers at Lund University in Sweden felt that this high-level policy focus overlooks a critical carbon-cutting opportunity: individuals in the developed world. So, the researchers took it upon themselves to rank a series of actions — from having fewer kids to eating a plant-based diet — that can empower ordinary folks to become the Captain Planets of their own personal narratives.

“The science tells us basically the future of a good life on planet Earth depends on reducing climate pollution by about 90 percent by 2050,” sustainability professor and study co-author Kimberly Nicholas told Gizmodo. “A lot of people recognise this and are ready to act, but most don’t know what to do.”

To identify the lifestyle factors that affect our carbon footprints the most, the researchers analysed dozens of peer-reviewed papers, carbon calculators and government reports, focusing on developed countries for which carbon emissions are the highest. The researchers took a “life cycle” approach, where, for instance, the carbon cost of car ownership includes the greenhouse gases produced during the manufacturing of the vehicle. Ultimately, they identified a dozen individual carbon-cutting actions, including four recommended ones “that are of substantial magnitude throughout the developed world.” 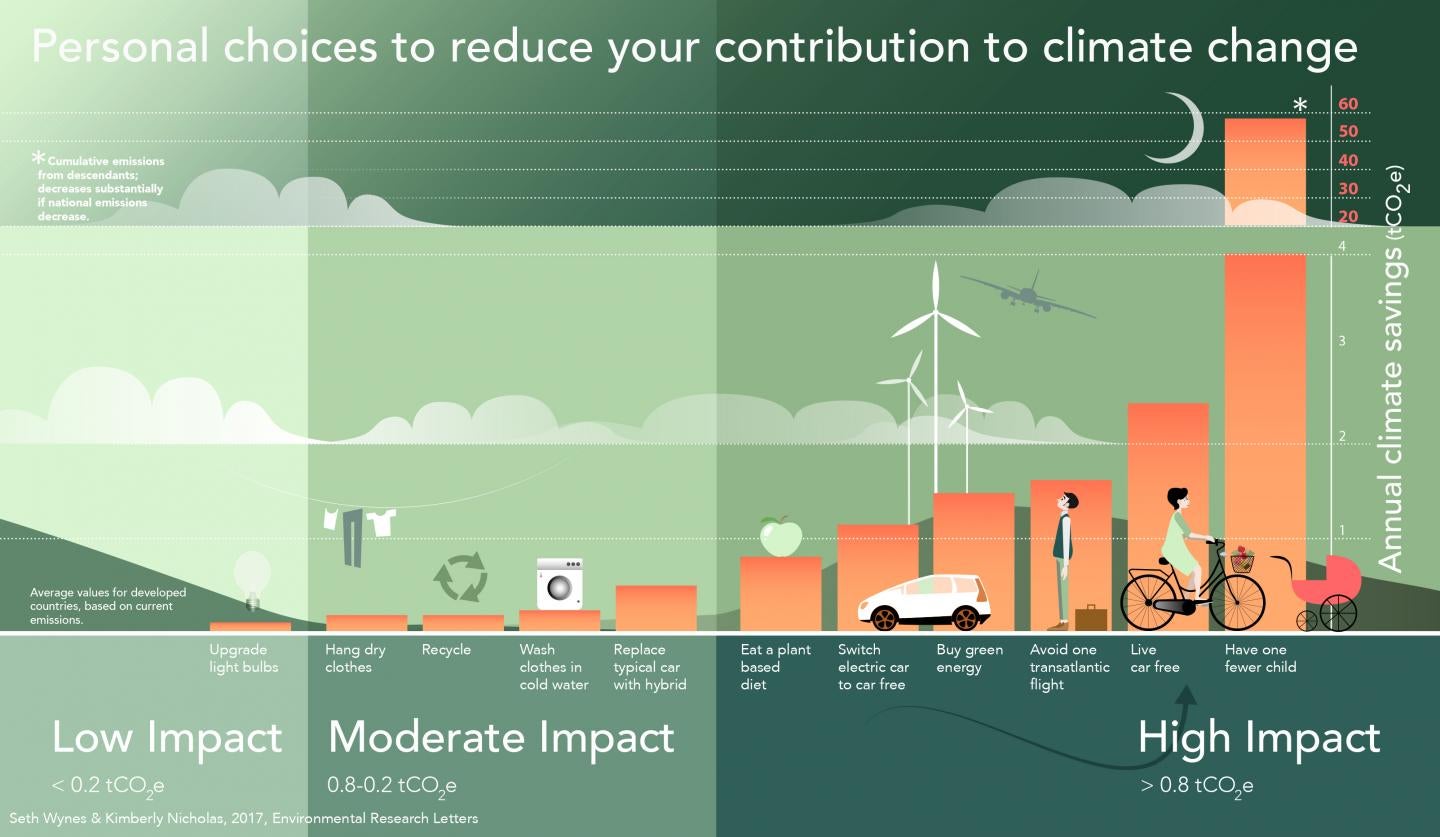 A study published in 2013 estimates that in order to limit global warming to 2 degrees Celsius, the average individual carbon footprint needs to be brought down to 2.1 metric tons of CO2 per year by 2050. The average American’s carbon footprint is currently estimated around 16.4 metric tons per year (not including emissions from future generations), so we’ve clearly got some work to do. The new study also revealed we could be doing much more to communicate about impactful lifestyle choices.

Analysing 216 individual recommended actions in Canadian high school textbooks, the researchers found that the best actions for reducing carbon pollution were “mostly presented in a less effective form, or not at all,” while lower-impact choices, like recycling, were front-and-centre. An emphasis on lower-impact lifestyle choices was also found in government guides from the United States, Australia, Canada, and the EU.

“The surprise was, those two sources of information,” textbooks and government recommendations, “focused on low or moderate impact actions,” Nicholas said. “These are good things to do, but they’re really not sufficient to tackle the scale of the challenge.”

Obviously, life as a kid-free, car-free, airport-avoiding vegan is not for everyone. I, for one, love me the occasional rack of ribs. But I’ve also found it pretty easy to give up driving in a city, and now that I know exactly how bad air travel is, I’ll feel an irksome pang of guilt every time I purchase tickets. And if you’re more worried about paying the bills than saving the planet, that’s okay. But Nicholas points out that many of the choices outlined in the paper can have personal benefits, too.

“I’ve found in my own life that making these changes to reduce emissions has been really positive,” she said, explaining how she’s ditched airlines in favour of train rides when travelling within Europe, and had lots of unexpected adventures as a result. “I think we individuals with a high carbon footprint do need to cut back climate pollution,” she added. “But we don’t need to cut back on quality of life.”