Canon's EOS M100 Is Another Apathetic Attempt at a Mirrorless Camera

Interchangeable lens shooters like the Sony A9 are evidence that mirrorless cameras can not only compete at the highest levels of photography, but they’re probably also the eventual successors to DSLRs. So you’d assume that a company like Canon would have made strong inroads into the mirrorless market by now, but with cameras like the new EOS M100, the company is still treating the mirrorless market as an afterthought, not the future. 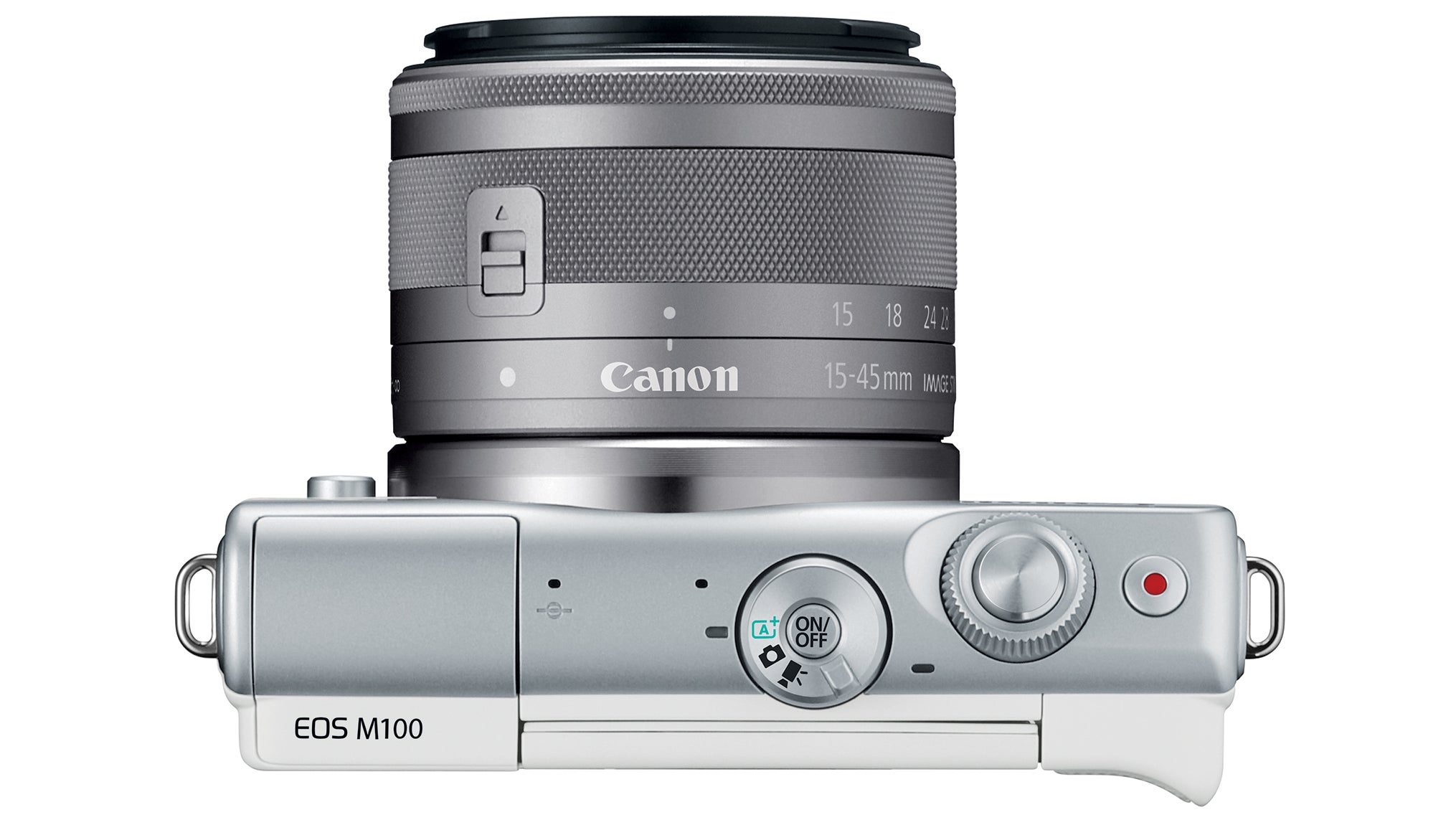 The EOS M100's control wheel looks more basic than one you’d find on a point-and-shoot.

Packing a 24.2-megapixel APS-C CMOS sensor that feeds Canon’s DIGIC 7 processor, the M100 boasts similar specs to Sony’s comparatively-priced a5000 and a6000 series of interchangeable lens cameras. But with a £570 price tag for the EOS M100 kit that includes a 15-45mm, f/3.5-6.3 stabilised lens (or £843 for a kit with 15-45mm and a 55-200mm stabilised lenses) Canon hasn’t included much else to sway consumers away from its competitors’ mirrorless offerings.

The EOS M100 tops out at 6.1-frames per second continuous shooting, with an ISO range of 100 to 25,600, which are both specs comparable to the Sony a6000's capabilities. But the a6000 is a camera that was announced back in early 2014. These aren’t specs you’d expect to find on a mirrorless camera announced in 2017, particularly from a company that’s already so behind in the mirrorless market. The M100's biggest disappointments, however, are its video capabilities, or lack thereof. 4K? Nope. 2K? Sorry, this mirrorless shooter can only muster 1080P at 60 frames per second. 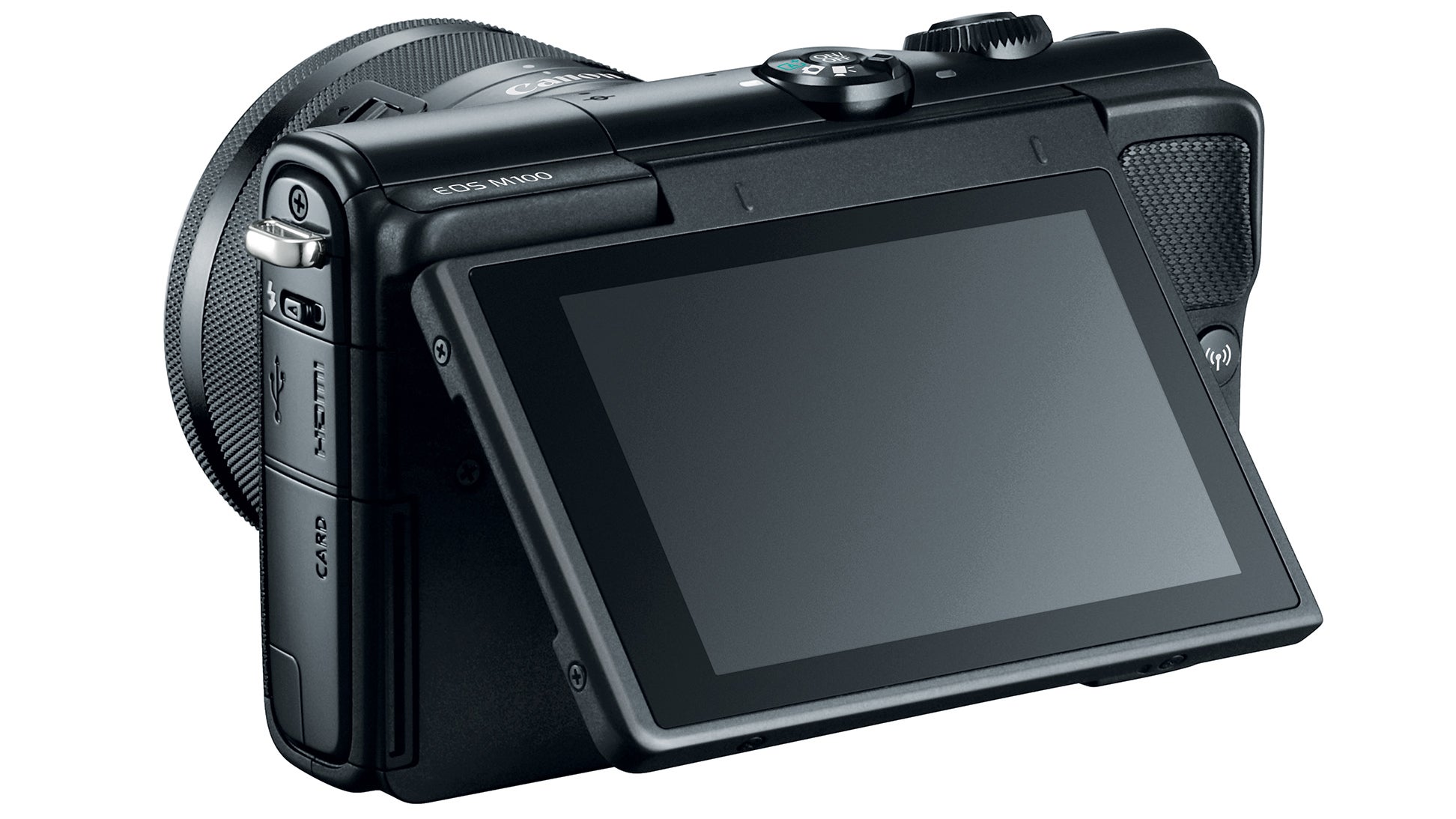 A 180-degree rotating screen makes snapping selfies easier, but your smartphone is already great at that.

So who is this camera for? With a three-inch LCD touchscreen that rotates 180 degrees for snapping selfies, a simplified user interface, and Bluetooth, wi-fi, and NFC wireless functionality for connecting and transferring images to an accompanying smartphone app, Canon is positioning the EOS M100 as “...an excellent choice for those looking to step up from smartphone photography...” But smartphones have gotten really great at photography, particularly selfies, and most can easily muster 4K video recording. Being able to occasionally swap in a telephoto lens just doesn’t make up for the M100's limited capabilities and neutered functionality.

Nikon and Canon both remain the most recognisable brands in the DSLR market, and both have released some truly spectacular cameras embraced by professional photographers around the world. But it’s clear that neither company wants to put out an equally fantastic mirrorless shooter that might jeopardise their DSLR sales. So it seems that instead it’s going to let companies like Sony and Olympus continue to improve and innovate in that field until no one wants a DSLR anymore, and no one remembers who Nikon or Canon were. [Canon]

Canon's Latest Stab at Mirrorless Cameras Could Actually Be Great