Did Scientists Just Discover the Last Common Ancestor of All Apes?

Fossils of ancient apes are even rarer than those of ancient humans, so very little is known about these important evolutionary missing links. The unexpected discovery of a 13-million-year-old infant ape skull in Kenya is offering a tantalising glimpse of a new species that lived well before humans and apes embarked upon their very different evolutionary paths.

To say that scientists know very little about ancient apes would be a gross understatement. An astounding dearth of palaeontological evidence exists for the Miocene period, an important era that ran from 23 to five million years ago. It was during this critical time that primitive apes began to diversify, adapting to new environments and spreading from Africa into Eurasia.

Palaeontologists have found bits of teeth and jaws from apes that lived during the Miocene, but traces of their skulls and limbs are exceptionally rare. Three specimens of note include a 25-million-year-old jawbone found in Tanzania (which technically falls outside the Miocene era), an 11-million-year old crushed skull of an ape known as Oreopithecus, and a 7-million-year-old ape skull with an intact braincase, belonging to the genus Sahelanthropus. That’s pretty much it. Palaeontologists have yet to find a complete ape skull in Africa between 17 and 7 million years ago, and no skulls whatsoever between 14 and 10 million years ago. 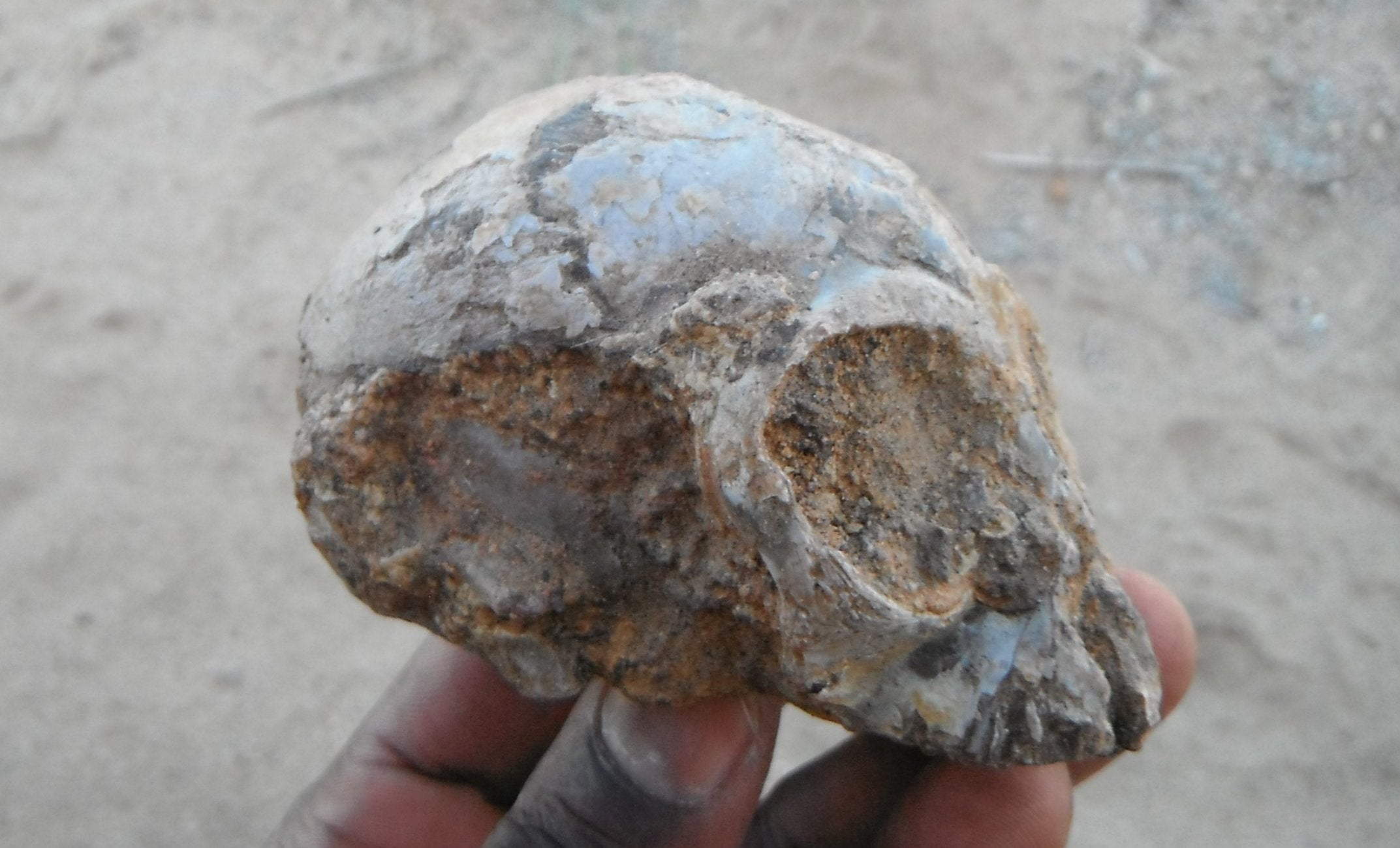 The Alesi skull after some sandstone rock was partially removed. (Image: Christopher Kiarie)

That has now changed with the remarkable discovery of a 13-million-year-old infant ape skull in the Napudet deposits of northern Kenya. In a new study published today in Nature, a Stony Brook University research team led by Isaiah Nengo describe the nearly complete skull, showing a number of adaptations that would go on to influence ape and human evolutionary histories. This newly-described species of ape, dubbed Nyanzapithecus alesi (or just Alesi for short), lived long before modern apes and humans diverged along separate evolutionary paths (humans split from apes around six to seven million years ago), but the discovery hints at what the earliest true apes must have looked like. What’s more, the researchers suggest that the genus to which this ape species belongs to, Nyanzapithecus, is the closest thing we know to the last common ancestor of all living apes.

Analysis of this tiny skull shows that this ancient species was more monkey-like than it was ape-like. If anything, Alesi resembled modern gibbons—monkey-like apes from southeast Asia. (Importantly, Alesi is not a direct gibbon ancestor, so this is a possible example of convergent evolution, where traits emerge independently across isolated species.)

The dating of the skull was done by analysing the rock layer from which the fossil was pulled, and by measuring the argon isotopes. Using X-ray synchrotron microtomography, the researchers were able to produce 3D images of the infant skull, and peer inside the fossil.

The infant’s baby teeth were missing due to the fossilisation process, but its unerupted adult teeth and molar roots remained intact. The sex of the specimen could not be determined, but it was about 16 months old when it died. The researchers established this age by counting the layers within the fossilised dental structures, a process akin to counting tree rings. This dental analysis allowed the researchers to link this specimen to a genus known as Nyanzapithecus—a “sister” group of hominids that includes gibbons, great apes, and humans, and a possible last common ancestor of all living apes (more on this in just a bit).

The nearly-complete skull provided the researchers with a rare opportunity to study the braincase of this ancient ape. Analysis of this specimen’s cranium shows that, had it grown to adulthood, it would’ve weighed about 25 pounds (11.3 kg). As noted, it looked very much like a gibbon, featuring a tiny mouth and nose relative to its head size. But unlike gibbons, it had a markedly smaller semicircular canal in its ear, which primates use for orientation and the perception of motion (particularly when they’re flinging themselves from branch to branch). This ancient ape, therefore, was not some tree-swinging monkey, but rather a slower, less agile primate. At this critical stage in evolutionary history, apes were already moving away from a purely arboreal existence. This evidence strongly suggests that Alesi was a true ape that lived after the split from monkeys.

“[We] know that [Alesi’s] skull combines some modern great ape and gibbon traits with other more primitive traits,” said Brenda Benefit, an anthropologist at New Mexico State University, who wasn’t involved in the study. “We know from the ear that [Alesi and Nyanzapithecines] did not predate the monkey-ape divergence as some had thought it might. That was important to know.”

David R. Begun, a professor of anthropology at the University of Toronto, says the study is very thorough, and he likes the analysis of dental development, brain size, and inner ear anatomy, but he feels Nengo and colleagues overreached with some of their conclusions. In particular, Begun doesn’t agree that Nyanzapithecines should be recognized as a distinct group, or that they were more modern than other known primates from the time, namely Proconsul (an extinct genus of primates that lived between 23 to 25 million years ago) and Ekembo (a similar genus that lived 20 to 17 million years ago).

“The authors claim that Nyanzapithecus is the closest thing we know to the last common ancestor of all living apes,” Begun told Gizmodo. “I am skeptical because I think that other Miocene apes such as Proconsul and Ekembo are also good candidates. The new specimen is remarkably complete and does tell us a lot about how these early apes grew (more like living monkeys than like living apes) and about brain size in early apes (again, more monkey-like than ape-like.)“

As Begun points out, the oldest known fossil of Nyanzapithecus is over 17 million years old, so this new species is a late surviving member of that lineage.

“It therefore does not mean that the last common ancestor of all living apes lived 13 million years ago, the age of this fossil,” said Begun. “It was much older than that.”

So the debate continues, as does the palaeontology. The only way to finally settle this debate once and for all is to find more fossil evidence, which, based on precedence, won’t be easy. It could be another generation before another fossil like Nyanzapithecus alesi is discovered. [Nature]