Finally, An Apocalyptic Wasteland Where People Aren't Arseholes To Each Other

From Mad Max to The Walking Dead, we live in a world teeming with apocalyptic fiction. Typically, they're stories which posit that humans will turn to their darkest impulses and screw over anyone and everyone for their own survival, or even out of pure selfishness. A new video game called Pyre is about the exact opposite of that.

The fantasy roleplaying game from Supergiant Games — which made the fantastical Bastion and the thrilling cyberpunk love story Transistor — opens with the player character abandoned and alone, on the brink of death.

You've been exiled from your home (a city-state called the Commonwealth) for the crime of reading and find yourself in a hellish wasteland called the Downside: a barren region where the Commonwealth dumps its criminals to fight and die among themselves. Just as you're about to expire, a caravan stops nearby, and three masked figures — the characters you see in the header image above — come out and take a look at you.

The conversation quickly turns to your survivability and the masked characters' estimations are grim. At first, you're led to assume they have decided to put you out of your misery, as two of the trio return to the caravan and leave the masked man to do the deed... except the masked man doesn't draw a weapon. He offers you food and water, removes his mask and introduces himself, offering you a place on the caravan with open arms. 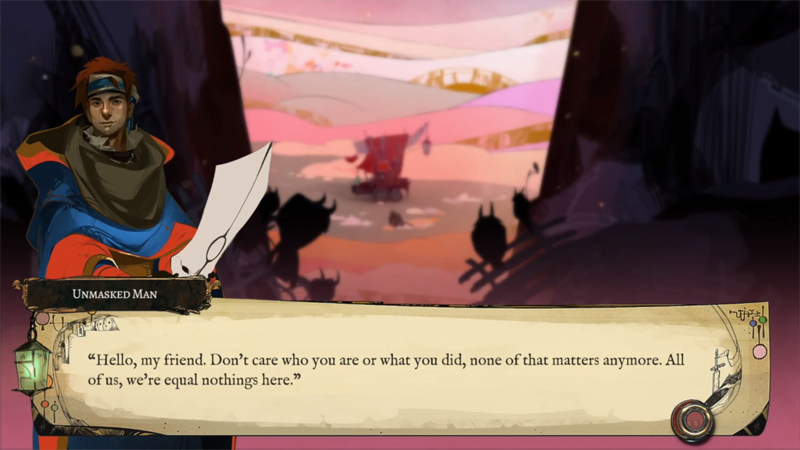 There's an initial ulterior motive to the masked group welcoming you in. They realise that as one of the rare people who knows how to read, you can help them on their quest to liberate themselves from the Downside by consulting a mysterious book that details a spiritual, astrological trial your group can participate in called the Rites (the main gameplay aspect of Pyre is that it's basically, putting it in the most reductive manner possible, 3-on-3 wizard basketball).

But despite that motive, it's very quickly established that they helped you out of kindness more than because of your usefulness to the group, and it's not the first time Pyre twists your expectations of a desolate world populated by exiles, some more unsavoury than others. In fact, it's almost alarming just how welcoming and positive everyone you come across is, despite the tragedy of their exile and the hellishness of their current environment. 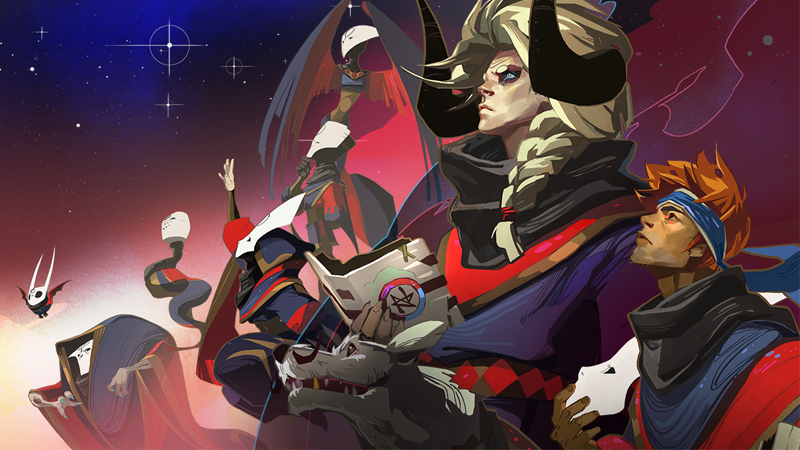 As your caravan continues its journey across the Downside, you pick up more people to add to your motley retinue of wizard basketball players. They're all from a variety of backgrounds — a strange orphan girl who hears voices, a winged harpy who's a member of the hated army the Commonwealth has been at war against for years, a sea-worm Knight who's lost his honour, and more — and yet, at no point, is anyone judged for their value to the group.

No one complains about more mouths to feed. Even characters who might be expected to antagonize each other, like former soldiers who fought against each other outside of the Downside, welcome each other as allies in the Rites.

Everyone's primary objective is to participate in the Rites and earn their freedom from the Downside — not just their own freedom, but that of the whole group. These are people who are united by their suffering, rather than broken apart because of it. The melancholy that pervades Pyre's unjust world gives way to the hope that bursts forth from the people who find themselves forced to live in it at every opportunity. 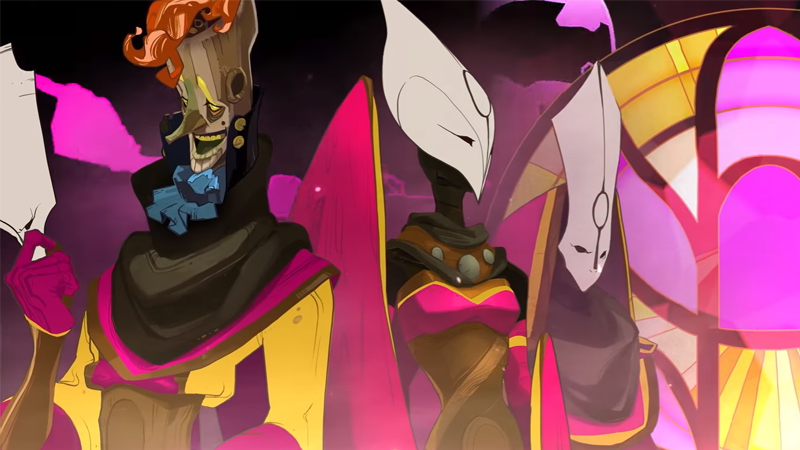 Even the rival teams you face in the Rites are startlingly chummy with your group, although your victory in a match means setting back their own chances for freedom. No one is bitter about losing to you, they just pick themselves up and proceed to try again.

The closest someone can get to outright hostility among your wizard-sports rivals — which include something as bizarre as a group of exiles using the Rites in an attempt to summon a long-dormant death god — is a group asking you to throw a match, so that they might advance in your place and become a step closer to freedom. If you refuse, they respect the decision and decide that they should try and advance on their own merits. Considering you're essentially battling for the right to escape terrible suffering, it's a surprisingly cordial affair.

A little bit into Pyre, you and your party learn two vital pieces of information. First, that your group has been gathered by a mysterious benefactor to free each other, one at a time through the Rites, to incite a peaceful revolution in the Commonwealth that would end the exiling of people to the Downside.

Then, after you've freed a few of your people, you learn that the cycle of Rites — which culminate with the opportunities to liberate one of your group — is coming to an end quicker than anyone realised and inevitably not everyone in your party will get a chance at freedom. You as a player are left with the guilt-wracking choice of getting to decide who gets to be freed in each special "Liberation Rite" — trying to balance the pragmatism of who would be best suited to help lead the brewing revolution, and the emotional aspect of freeing who you think deserves it the most. 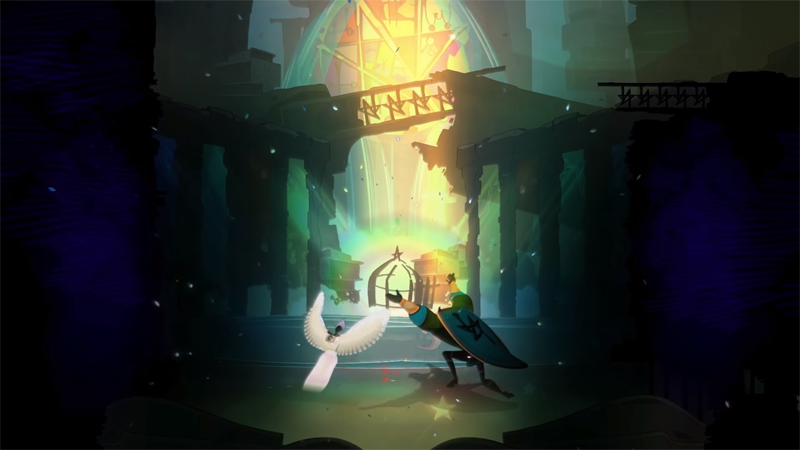 And yet, as your group slowly dwindles as one after the other is sent to their freedom, and the chances to liberate more of them start to run out, your party wholly accepts their twisted fate. There's no jostling among them for who should get freed next, or at all. No one abandons your group to try and go it alone as opportunities for freedom begin running out.

In fact, it's almost sadder that they simply accept some of them will have to sacrifice their chance at freedom so that the greater cause of your revolution has a chance to succeed. They will still be stuck in the Downside even if it's successful — the Rites are the only way back, and you're told a new cycle of them will not begin in any of their lifetimes after this current one concludes — but they all agree that they will be happy that you as their leader have made the right decisions about who gets to be free and who doesn't, confident that the bonds you've all forged together along the way mean much more to them than separation through liberation.

So much post-apocalyptic fiction, the sort of material we all love to turn to in uncertain times, takes a cynical view on how we would deal with a terrible, civilisation-ending event. That cynical fiction often comes to the conclusion that other people aren't to be trusted, that even the strongest group can be split apart by one cruel, selfish act by a single person — that when our backs are against the wall, it's every man or woman for themselves, no matter what the cost to others. 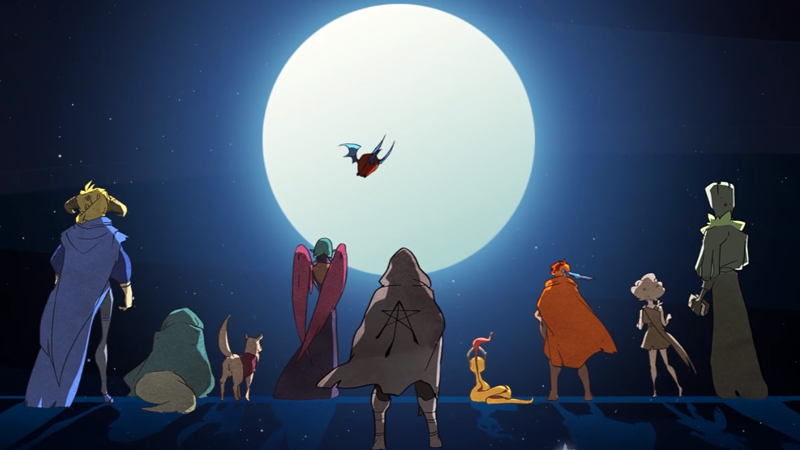 Pyre casts that notion aside to instead tell the story of a group of people who don't give into that impulse, and more impressively, never seem to even consider something other than the greater good. It's a game that, as melancholy as it can be, is ultimately about the strength hope can give to people, a refreshing lesson to be learned from the sea of darker post-apocalyptic stories we currently find ourselves in.

It's also about wizard basketball, and that's pretty damn great too.