If you, like me, are an overly sweaty nerd with no musical ability who has always dreamed of being a less sweaty nerd with some musical ability, now’s your chance: a team of astronomers and musicians have created a programme that allows you to make songs with the sounds of planets orbiting the ultracool dwarf star TRAPPIST-1. While their programme won’t make you less prone to perspiration, you will definitely have something that can rightfully be called a work of art.

The player is part of a bigger programme, aptly called System Sounds, which is the brainchild of a group of astronomers who’ve been studying the “resonant chain” of the TRAPPIST-1 star’s seven Earth-sized exoplanets, which were announced to the world back in February. A resonant chain describes how the alien planets’ gravitational tugs work together to keep them all in stable and circular orbits around each other and their host star. As astronomer Dan Tamayo explained to Gizmodo back in May, TRAPPIST-1 represents the longest resonant chain “that has ever been discovered in a planetary system.”

According to the astronomers, the TRAPPIST-1 system’s resonant chain is mathematically quite eloquent, as the planets seem to conduct their own symphony within the system.

“Seven Earth-sized planets around a nearby star is enough to get anyone excited, especially when several of them have the potential to support liquid water,” System Sounds co-creator Matt Russo, a postdoctoral researcher at the Canadian Institute for Theoretical Astrophysics, told Gizmodo. “But what makes TRAPPIST-1 really remarkable is that all seven of its planets are locked in a resonant chain, where the lengths of the planet’s years form simple whole number ratios with each other. This is what’s responsible for both the system’s harmony and its rhythm.” 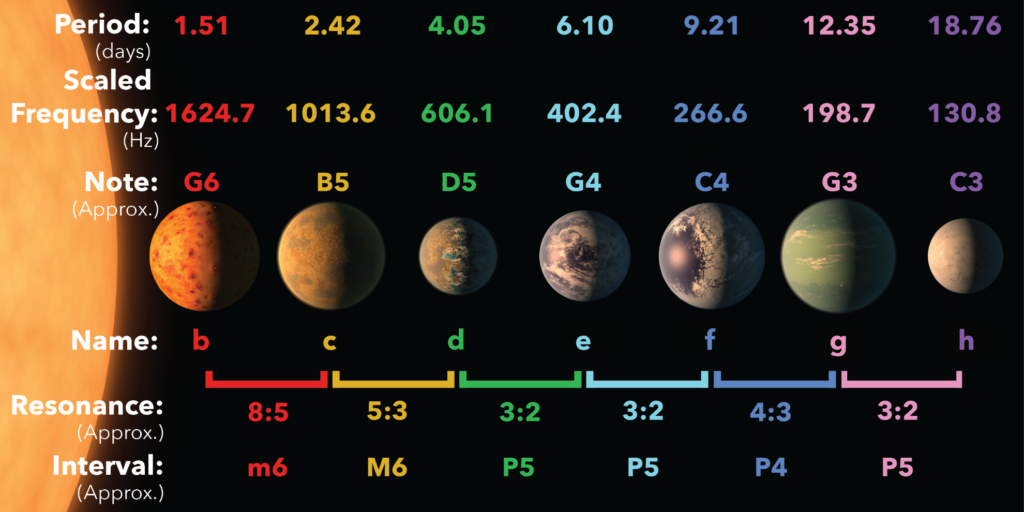 The researchers created their own software to “translate” data from NASA’s K2 mission, which measured the orbital periods of the planets, into musical notes (here it is on GitHub, ya nerds). Users can speed up or slow down the tempo and/or volume to their liking using handy toggle tools in the new programme.

“We simply sped up the motion of TRAPPIST-1's seven planets until their orbital frequencies produced musical notes,” Russo explained. “To make them a little more familiar we played these notes on a piano, once per orbit. To showcase more of the rhythmic structure, we then let a drum play for every time two neighbouring planets are at their closest. This is when they give each other a gravitational tug and keep themselves locked in this stable pattern.”

While you can’t add vocals within the programme, nothing’s stopping you from throwing your own spin on a sick TRAPPIST-1 beat. Maybe there’s been a space DJ living inside you all along—now’s your chance to let it out. [h/t Motherboard]

Why NASA Will Test its Asteroid Defense System This October