We’ve all been forced to do it: create a password with at least so many characters, so many numbers, so many special characters, and maybe an uppercase letter. Guess what? The guy who invented these standards nearly 15 years ago now admits that they’re basically useless. He is also very sorry.

The man in question is Bill Burr, a former manager at the National Institute of Standards and Technology (NIST). In 2003, Burr drafted an eight-page guide on how to create secure passwords creatively called the “NIST Special Publication 800-63. Appendix A.” This became the document that would go on to more or less dictate password requirements on everything from email accounts to login pages to your online banking portal. All those rules about using uppercase letters and special characters and numbers—those are all because of Bill.

The only problem is that Bill Burr didn’t really know much about how passwords worked back in 2003, when he wrote the manual. He certainly wasn’t a security expert. And now the retired 72-year-old bureaucrat wants to apologise.

“Much of what I did I now regret,” Bill Burr told The Wall Street Journal recently, admitting that his research into passwords mostly came from a white paper written in the 1980s, well before the web was even invented. “In the end, [the list of guidelines] was probably too complicated for a lot of folks to understand very well, and the truth is, it was barking up the wrong tree.”

Bill is not wrong. Simple math shows that a shorter password with wacky characters are much easier to crack than a long string of easy-to-remember words. This classic XKCD comic shows how four simple words create a passphrase that would take a computer 550 years to guess, while a nonsensical string of random characters would take approximately three days: 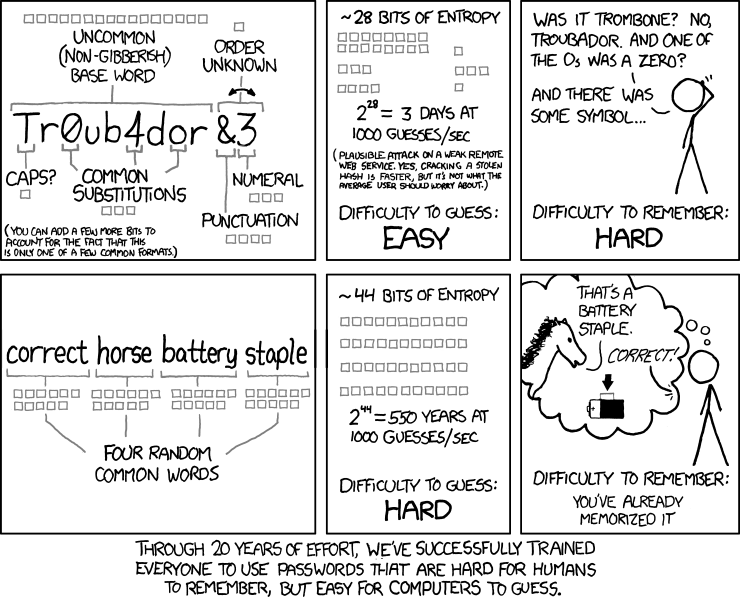 This is why the latest set of NIST guidelines recommends that people create long passphrases rather than gobbledygook words like the ones Bill thought were secure. (Pro tip: Use this guide to create a super secure passcode using a pair of dice.)

Inevitably, you have to wonder if Bill not only feels regretful but also a little embarrassed. It’s not entirely his fault either. Fifteen years ago, there was very little research into passwords and information security, while researchers can now draw on millions upon millions of examples. Bill also wasn’t the only one to come up with some regrettable ideas in the early days of the web, either. Remember pop-ads, the scourge of the mid-aughts internet? The inventor of those is super sorry as well. Oh, and the confusing, unnecessary double slash in web addresses? The inventor of that idea (and the web itself) Tim Berners-Lee is also sorry.

Technology is often an exercise of trial and error. If you get something right, like Jeff Bezos or Mark Zuckerberg have done, the rewards are sweet. If you screw up and waste years of unsuspecting internet users’ time in the process, like Bill did, you get to apologise years later. We forgive you, Bill. At least some of us do. [Wall Street Journal]

'WannaCry Hero' Marcus Hutchins Has Been Released on Bail

Good Hackers Can Do Bad Things, Too