Scientists have spotted a large wildfire raging across western Greenland, a place better known for its enormous glaciers than for terrain-destroying blazes.

Satellite evidence of a “sizable fire” about 90 miles (150 kilometres) northeast of the town of Sisimiut was first detected on 31 July, according to NASA’s Earth Observatory; on the same day, the fire was reportedly spotted by a passenger plane. Over the next week, NASA-led satellites captured daily images of smoke pouring off the tundra from what appear to be multiple conflagrations. Based on the latest data available on the European Union-based Copernicus Emergency Management Service, the largest of the wildfires seems to have torched several thousand acres.

“There are fires in Greenland, but it’s not an African savannah,” Stef Lhermitte, a snow and ice researcher at Delft University of Technology, who recently did a quick analysis of MODIS satellite data on fire activity in Greenland, told Gizmodo. “As far as I can see, the current fire is the biggest one recorded by satellites since 2000. I think it’s the biggest on record.”

Lhermitte noted that 2017 has been an exceptional year for fire activity in Greenland, with MODIS detecting far more solid evidence for wildfires than in any other year since 2000. (Although fires have been spotted before.) 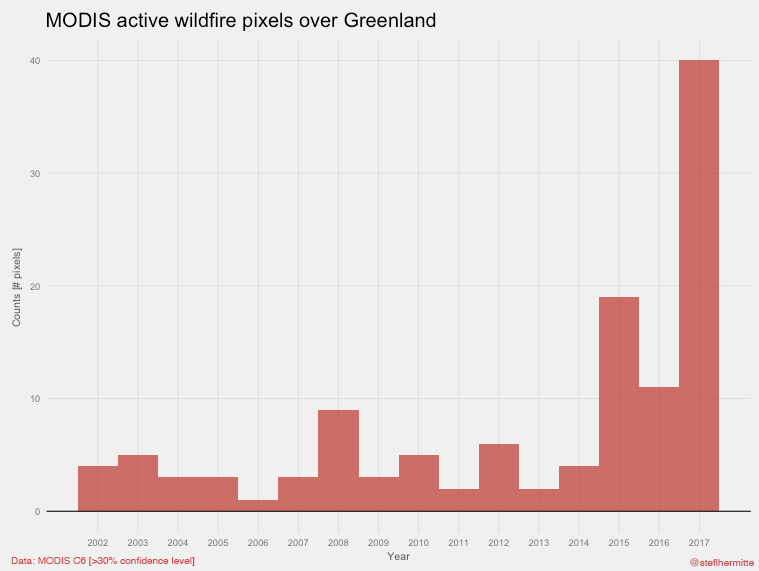 Speaking to Wildfire Today, Miami University scientist Jessica McCarty noted that the fires appear to be “occurring on areas of degraded permafrost.” Permafrost—ground that, as its name implies, is permanently frozen—contains vast amounts of dead plant matter that can become highly combustible if it thaws and dries out. In recent years, ecologists have noted an uptick in permafrost fires in Alaska, Canada, and Siberia, which have been attributed to land use shifts, human-caused climate change, and upsettingly, humans setting more fires. This is a disturbing trend, seeing as peatland fires can smoulder underground for weeks, releasing boatloads of sequestered carbon into the atmosphere.

“This fire in Greenland is part of a growing awareness of how important fire is going to be in shaping northern ecosystems under a warming climate.”

While it’s not clear what triggered the Greenland fires, Lhermitte pointed to lightning as a likely ignition source. “There’s a second fire 50 kilometres south [of the largest one] which is much smaller, and started on the same day, he said. “Based on that I would assume it may be lightning but it’s difficult to say.”

Fair weather seems to be helping the fires sustain themselves. Ice sheet researcher Jason Box of the Geologic Survey of Denmark and Greenland told Climate Central that while fires in Greenland’s tundra are rare, temperatures spiked to an unusually balmy 12° Celsius days before the wildfires were first noted. “It’s been dry as well,” Lhermitte added. “Basically that creates the potential for the fire to start spreading.”

As for whether these fires are a sign of what’s to come in our hotter future, as Greenland’s ice sheets and permafrost continue to melt, it’s a bit early to say given how little data we have, but it’s certainly a troubling possibility. Globally, wildfire seasons have become longer and more intense in recent years, and although the causes are complex, fire ecologists say climate change is playing a role.

A news report from the Greenland Broadcasting Association on 4 August noted that hiking and hunting closures were in effect for areas around Nassuttooq and Amitsorsuaq. Authorities continue to monitor the situation closely, but fire suppression measures had not been taken as of yesterday. [Climate Central, NASA Earth Observatory, Wildfire Today]