These Adorable Sea Snakes Are Losing Their Stripes Because of Pollution

Sea snakes are a striking sight on the sun-dappled Pacific and Indian Ocean coral reefs they call home. They swim with deliberate yet graceful winding movements above the reef, and they are often conspicuously coloured, with many species sporting patterns flush with yellows, oranges, and blues, broken up by stripes, blotches, and spots. This scaly skin, delicately painted by evolution, is part of what makes encounters with them so memorable. However, one species of sea snake—the turtle-headed sea snake (Emydocephalus annulatus)—is losing its captivating stripes. The culprit behind this robbery? Pollution.

By sea snake standards, the turtle-headed sea snakes found across Indo-Pacific coral reefs are unusual. They are picky eaters, with squat and blunted heads evolved to accommodate a diet of fish eggs laid on surfaces near or on reefs—features that make their faces adorably turtle-like. While most sea snakes are quite venomous, the turtle-headed sea snake has lost much of its venom potency, because fish eggs aren’t exactly hard to kill. Normally adorned in handsome black and white striping, turtle-headed sea snakes in some locations are turning completely black. Now, a newly published study in the journal Current Biology has revealed that in certain locations—usually near cities or human activities—the sea snakes are adapting to the presence of human pollution, darkening their skin as a means of avoiding the effects of pollutants.

This Gothification in the face of urban development—known as “industrial melanism”—has some precedence in the animal kingdom. A classic case of industrial melanism is England’s peppered moths, which were originally white and flecked with black, but rapidly became solidly dark after soot from 19th century industry blanketed tree trunks, making light moths far more likely to be spotted by predators. But, for determining the direct cause of the sea snake stripe loss, it was industrial melanism in French pigeons that caught the attention of the study’s lead author, Claire Goiran at Labex Corail & Université de la Nouvelle-Calédonie. It turns out that the melanin in dark pigeon feathers in urban environments may play a crucial role in binding to, concentrating and storing toxic trace metals common in city pollution, helping to remove the compounds from inside the body, where they can build up and cause harm. Could sea snakes be doing the same thing, using melanin-rich skin as a dumping ground for the pollutants encountered in their surroundings?

The team of researchers, based out of New Caledonia, Australia and France, investigated this question by examining turtle-headed sea snakes living along the coastlines of the South Pacific island of New Caledonia and tropical Australia, in both urban, human-impacted areas and undeveloped, pristine reefs. The scientists surveyed the color variants of turtle-headed sea snakes across their geographic range, and confirmed that dark, stripeless snakes were very common in reefs near urban areas or industrial activity, but in less impacted regions, the more typical banded or blotched patterns were dominant. The researchers also took sloughed skins from snakes from both polluted and unpolluted areas, and tested the concentrations of trace metals stored up in the skins. Finally, the research team tested trace metal concentrations in dark and light bands in the skins of sea kraits (a close relative) to help verify that it was melanin-loaded skin specifically that was sucking up and holding onto pollutants.

For all of the thirteen trace metals tested, concentrations were higher in the sloughed skins of urban-industrial snakes than in those of their country cousins. Additionally, there were higher concentrations of five trace metals (cobalt, nickel, lead, manganese, and zinc) in darker bands than in lighter bands. Across the board, it appears as though, like the French pigeons, turtle-headed sea snakes are using industrial melanism to escape some of the harmful conditions of their environment.

“There will be limits to that resilience. Sea snake populations are declining worldwide, and I fear that we will lose many of these fascinating animals unless we can stop using the ocean like a toilet.”

Of course, storing nasty pollutants in your skin does little good if they just sit there. Luckily, sea snakes, like all reptiles, regularly slough off and replace their skin as they grow. So when turtle-headed sea snakes cast aside their old rags, they are also permanently expelling a big dose of trace metals—and the researchers found that the urban-industrial populations are exploiting the benefits of this ability, shedding their skins more frequently than their clean-living relatives.

There’s a curious wrinkle in specifically why this increased shedding occurs in the stripeless, urban animals, and it helps illustrate just how advantageous this pollution-binding melanin must be. Melanin-heavy skin is good at attracting algal spores, convincing them to settle out of the water onto the dark surface. This means that black, stripeless snakes accumulate a layer of slimy, fluffy algae faster than striped snakes. 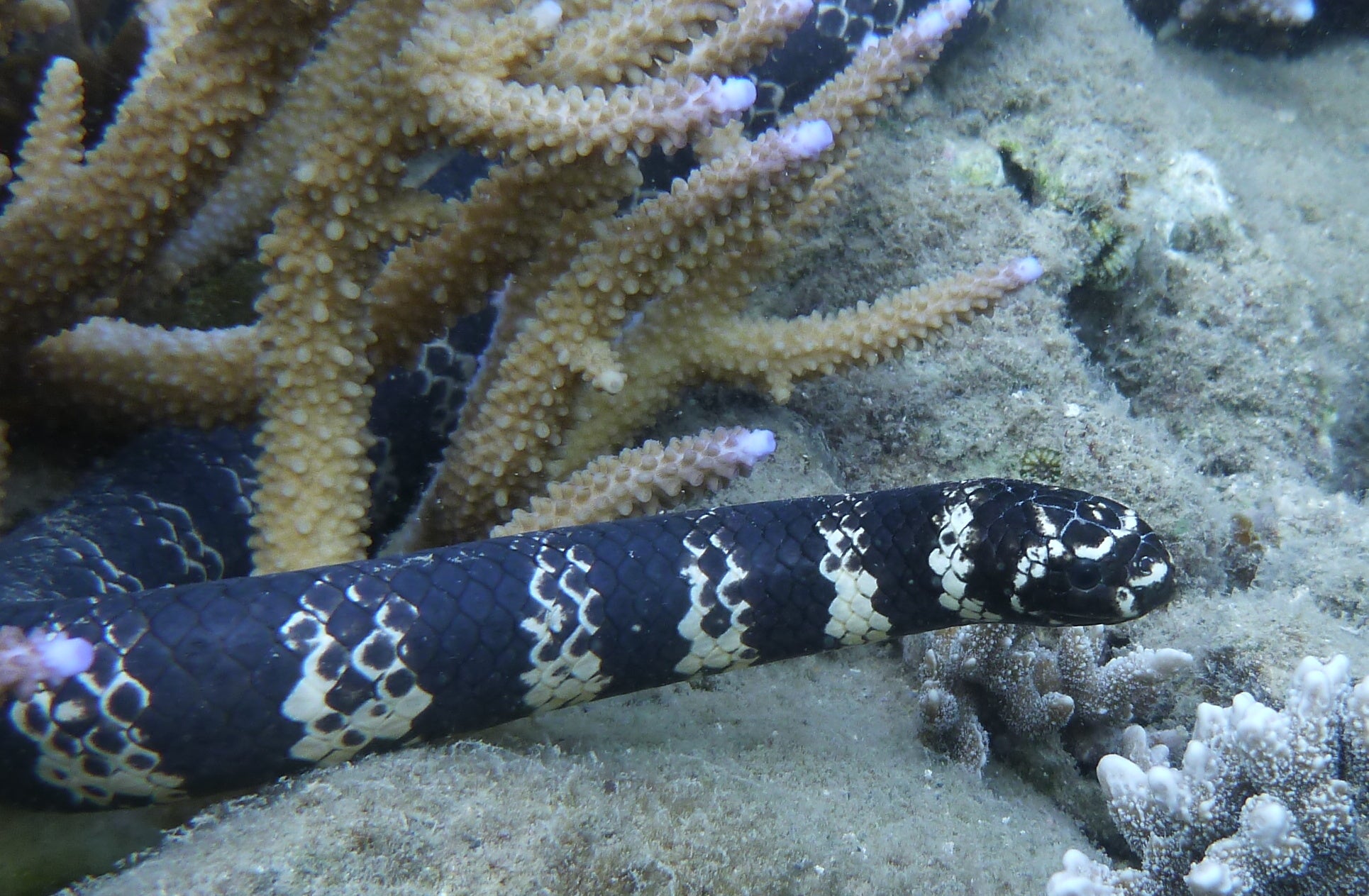 “That algal cover reduces the snake’s swimming speed by about 20%, and makes it slough its skin more often (to get rid of the algae),” study author Rick Shine told Gizmodo in an email. “Until the idea about trace elements came along, I thought that black colour was a disadvantage—but now it looks like the advantage of excreting trace-element pollutants may be great enough to overcome the algal-fouling problem.”

The research highlights a sobering reality of the influence humans have in natural spaces—even those that appear untouched. The urban-adjacent reefs that contain high levels of trace metals do so invisibly, the only observable consequence being the subtle evolutionary impact upon turtle-headed sea snakes, which take in and accumulate the pollutants from their diet of fish eggs. But it also adds to a rising body of work that illuminates just how quickly life can adapt to humanity’s pervasive ecological presence. It’s not just that organisms are dealing with human activities within their normal range of abilities; we are observing life evolving before our very eyes to a world full of human-made challenges.

But that isn’t to say that this type of rapid evolutionary response and resilience makes species immune from human-driven peril.

“There will be limits to that resilience,” Shine said. “Sea snake populations are declining worldwide, and I fear that we will lose many of these fascinating animals unless we can stop using the ocean like a toilet.”

Jake Buehler is a Seattle area science writer with an adoration for the Tree of Life’s weird, wild, and unsung—follow him on Twitter or at his blog.

Could This Squishy Robot Be the Future of Robotics?

Did Scientists Just Discover the Last Common Ancestor of All Apes?