Old sailor’s tales about the seas being so full of fish you could walk on them, or oysters the size of frisbees, tend to inspire scepticism today, and for good reason—most of us have very little direct experience with the oceans, except for the occasional news article about how we’ve screwed it up beyond repair. But the oceans of yesteryear really were more plentiful than they are today, and a new analysis of 240-year-old nautical charts hints at just how dramatically things have changed.

A first-of-its-kind comparison of 18th century British nautical charts with modern coral reef databases suggests that reefs were far more widespread throughout the Florida Keys (a string of tropical islands stretching about 120 miles off the southern tip of Florida) several centuries ago, particularly along coastlines and in Florida Bay. It’s a finding that could have implications for reef conservation and restoration, prompting ecologists to rethink what constitutes an ‘undisturbed’ ecosystem. And it all started when historical ecologist Loren McClenachan became captivated by a weathered old map she stumbled upon at the British Admiralty Archives some ten years back.

“I actually had [a copy of] it on my wall for a while,” McClenachan told Gizmodo, explaining how the map, part of a pair of nautical charts of the northern and southern Keys created by cartographer George Gauld for the British Admiralty between 1773 and 1775, seemed to contain troves of ecological information—including notations of coral and sea grass cover.

“It was made while the Brits owned the Florida Keys,” McClenachan explained. “Part of the expansion of their empire was to get really good at sailing, and they knew that other ships—Spanish ones—had crashed,” in this area. “My understanding is that Gauld wanted to continue the mapping, but 1776 happened and he was driven out by pirates,” she added. 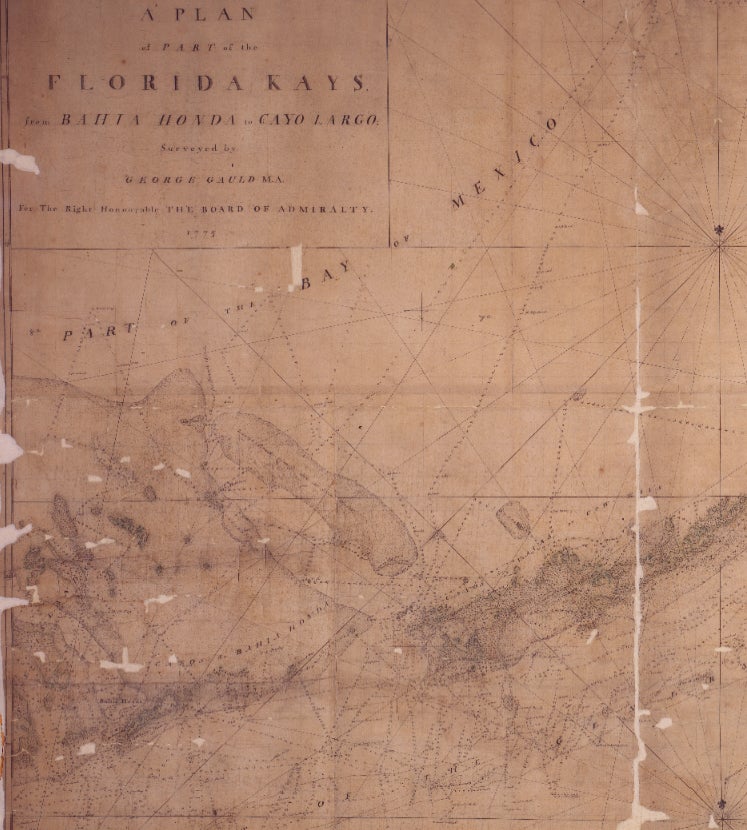 By comparing Gauld’s maps with modern coral cover information from several databases, McClenachan and her colleagues arrived at a bleak conclusion: roughly half of the seafloor occupied by corals in the vicinity of the Florida Keys during the late 18th century is no longer there. Much of the dieback seems to have occurred in Florida Bay (where coral cover was an estimated 88 per cent higher in the late 18th century) and close to shorelines (an estimated 69 per cent higher per Gauld’s maps).

Importantly, this suggests recent estimates of coral dieback in the Keys, derived from data collected in the 1970s, ‘80s, and ‘90s, grossly underestimate the degree to which these ecosystems have receded, according to the research published this week in Science Advances.

“We’ve really lost these near shore reefs—lots of them probably disappeared before we even started studying them in the water,” McClenachan said. She suspects the dieoff patterns are due to greater human disturbance close to shorelines, and in the case of Florida Bay, changes following the widespread drainage of the Everglades in the early 20th century.

Of course, there are plenty of caveats. This study only compared two nautical charts from a single time point in the 18th century to a much more detailed modern record—we have to fill in the intervening centuries with educated guesswork. What’s more, Gauld’s charts don’t distinguish between dead coral and live coral, nor do they contain coral absence data. We have no way of knowing if areas where Gauld marked no coral truly lacked reefs, or if he simply never visited these places to find out.

I’ve reached out to several coral biologists to see if they have any other thoughts about the merits or limitations of the study, and will update this post if I hear back.

Even just qualitatively speaking, though, snapshots into the past like this can be illuminating. “I think it’s a shifting baseline story—it puts the modern declines,” due to ocean acidification, climate change, development and pollution, “in context,” McClenachan said. Perhaps, places that we presume have always been coral-free used to host vibrant reefs. “In terms of restoration, knowing where coral used to be is useful.”

Personally, I can’t help but wonder how many old sailor’s tales we’ve written off as legend have a nugget of truth at their centre. [Science Advances]