Are you a boat driver who drives boats in the ocean? Then do I have bad news for you, boathead. And that bad news is lightning. Not so fun driving boats now, boaty!

Anyway, it is slowly becoming clear that the world is falling apart, so I’m finding it increasingly difficult to take anything less interesting than utter disaster seriously. So here’s a thing that is probably bad but not as bad as nukes, hurricanes or earthquakes: There seems to be twice as much lightning over shipping channels than in the adjacent areas—and it’s probably our fault. Incredible.

“We hypothesise that emissions of aerosol particles and precursors by maritime vessel traffic lead to a microphysical enhancement of convection and storm electrification in the region of the shipping lanes,” the authors write in the study accepted for publication in Geophysical Research Letters.

You might ask, what? Here’s what. Storms with a lot of convecting air, you know, those with giant cumulonimbus clouds, might lead to electrical discharge in the form of lightning. This electrification requires really tall clouds. Scientists think that more aerosol and dust particles can lead to more, smaller cloud droplets, which slows the rain from forming and therefore makes bigger clouds.

The researchers mention that it would be hard to actually measure the effect of these particles on lightning, especially over the oceans. Instead of that, they looked for an association: Lightning over shipping channels and over the space adjacent, versus emissions. The researchers studied over a billion lightning strikes from the World Wide Lightning Location Network, emissions from the Emissions Database for Global Atmospheric Research, and data from other sources. All that data combined got them their answer and bolstered their hypothesis: “Boat gas may make light flash.”

“We find lightning frequency to be enhanced by a factor of about two on an annual basis centered over two of the world’s main shipping lanes,” the researchers write in the paper. “Meteorological factors are unable to explain these enhancements and we conclude that aerosol particles resulting from shipping emissions perturb cloud microphysics, convection, and ice processes leading to enhanced lightning.”

Here’s the crazy chart where you can see the obvious outline of the shipping lanes, one jutting west from northern Sumatra and the other heading northeast from Singapore. Those lines aren’t boats—they’re average annual lightning strikes (top) and emissions data (bottom). 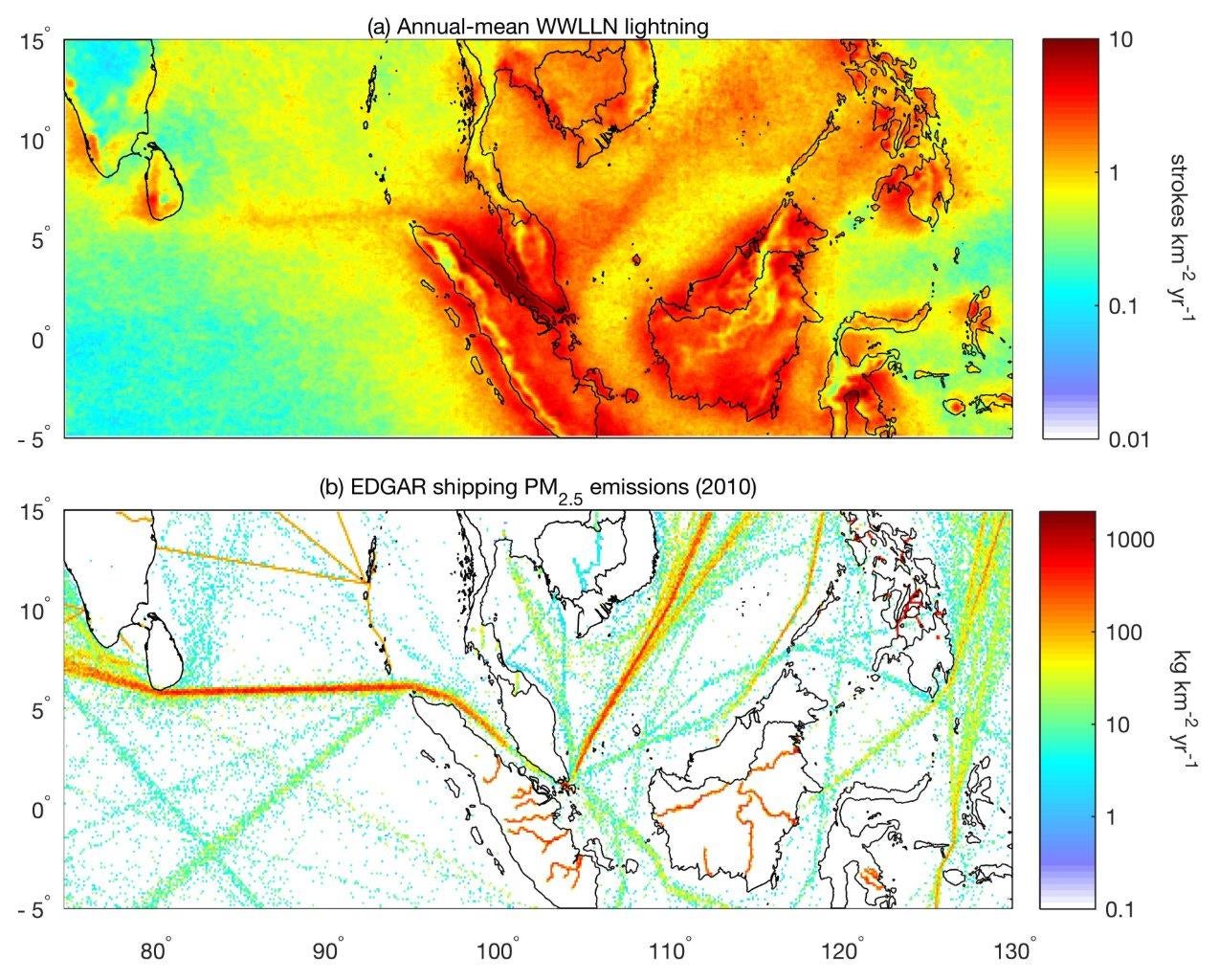 One scientist, Steven Sherwood from the University of New South Wales in Australia, told Ship & Bunker that the connection between these exhaust particles and clouds isn’t completely settled yet, nor does this study resolve the uncertainty. He said this result was still important in its own right, as it could help “resolve some of the bigger questions about what some of the general impacts of our emissions on clouds.”

Also, maybe this can serve as yet another reminder that we humans really do have an impact on our environment in ways stranger than just heating up the atmosphere and paving over the grass.

So next time you’re driving your boat, look out for the lightning whose prevalence you might be increasing. Dang, nature. [Geophysical Research Letters]