By Kristen V Brown on at

Back in April, at Facebook’s annual developer conference, the company announced an ambitious—and very creepy!—plan to read its users’ minds. Facebook’s secretive hardware R&D division, Building 8, planned to develop its own “brain-to-computer interface” hardware that would allow a user to send words straight from her brain to a computer by merely thinking. But until now, we’ve heard scant details as to how exactly Facebook plans to accomplish this.

“It sounds impossible,” Building 8 head Regina Dugan said at the time. “But it’s closer than you may realise.” Within “a few years,” she said, her researchers aimed to create a system that lets people type with their thoughts three times faster than you can type with a smartphone.

Speaking at an MIT Media Lab conference on Monday, project head and neuroscientist Mark Chevillet dropped some more hints as to how this long-shot goal might be achieved.

His team, he told the audience, plans to use noninvasive sensors to detect brain signals associated with a person thinking a word, then use an algorithm to figure out what the intended word was, according to a report of the conference by STAT News. Artificial intelligence will also likely figure in, helping to determine which of several possible words is actually the one a user was thinking of. And the team is leaning towards using a technology called diffuse optimal tomography to pull all of this off, which would work by shining near-infrared light onto brain tissue, and deducing patterns of neurons based on how the light scatters.

According to STAT, Chevillet pegged the technology as a solution to the fact that people don’t like to use voice recognition to send texts when they’re in earshot of others, even though it's a faster mode of typing.

Fact: People don't like using voice assistants in front of other people. Facebook: What if you could type from your brain? #digitalneuro

Facebook is hardly the first to set out to make a working brain-computer interface. DARPA, which Dugan used to head, has invested heavily in brain-computer interface technologies to do things like treat mental illness, and restore memories to soldiers injured in war. More recently, Silicon Valley has been locked in an arms race to build a brain computer interface that allows us to communicate by thought. Earlier this year, Tesla and SpaceX head Elon Musk revealed a new machine-brain interface company, Neuralink. So did Silicon Valley entrepreneur Bryan Johnson (that one’s called Kernel) and Facebook alum Mary Louise Jepsen (Open Water).

And while they might seem like science fiction, brain-computer interfaces have already had some impressive success. Researchers have used such systems to allow people with disabilities to control paralyzed or prosthetic limbs. But stimulating the brain’s motor cortex is a lot simpler than reading a person’s thoughts and then translating those thoughts into something that might be read by a computer. That technology is still in its infancy, and some scientists are sceptical that the technology will ever exist. Others raise their eyebrows at the thought of doing it “within a few years.”

Diffuse optical tomography, which Chevillet said his team might use, is a technology already more than a decade old that can successfully image large sections of the brain all at once. But even so, for now it cannot peer very deeply into the brain, and it only begins to approach the level of detail obtained with an fMRI.

Facebook’s end goal is to build an online world that feels more immersive and real. That may be a hard sell, though, if doing so requires users to don something that looks like this. 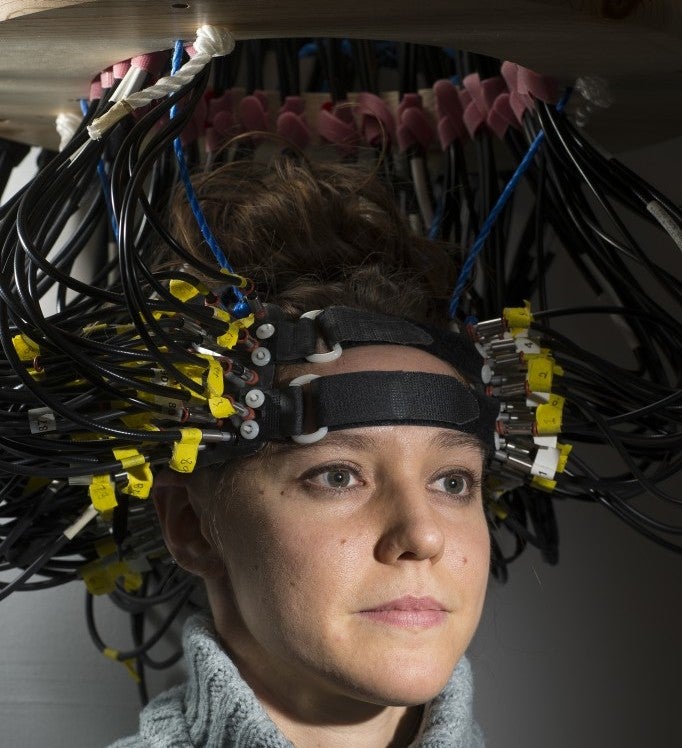