If a Dodgy Russian Advert Network Promotes a Facebook Event, Will Anyone Show Up?

Last week, news broke a network of fake Russian trolls bought at least £76,400 in advertising from Facebook between June 2015 and May 2017. The ads were sometimes politically themed and potentially reached tens of millions of Americans, raising questions about possible links to increasingly well-evidenced allegations of Russian interference in the 2016 elections—though the total spent ultimately paled in comparison to ad buys by Donald Trump’s campaign, and could have ultimately been linked to some kind of marketing operation instead.

Here’s something a little more tangible, per the Daily Beast. Apparently, a known Russian front company managed to use “Facebook’s event management tool to remotely organise and promote political protests in the US, including an August 2016 anti-immigrant, anti-Muslim rally in Idaho,” which were promoted using adverts paid for by the same network of fake accounts.

According to the Beast, Facebook confirmed the events were taken down in the same purge of the £76,400 advertising buy network last week. The Idaho rally originally appeared as sponsored by “SecuredBorders,” which is linked to the Internet Research Agency, a strange St Petersburg venture with ties to both Vladimir Putin and private interests.

But if this was an attempt to actually translate influence into a change in behaviour, the event does not seem to have been very successful. One cached Facebook event which appears to be the same one flagged by the Beast had just 48 interested attendees, with only four marked as “went,” a category that does not necessarily denote a physical presence at the rally. 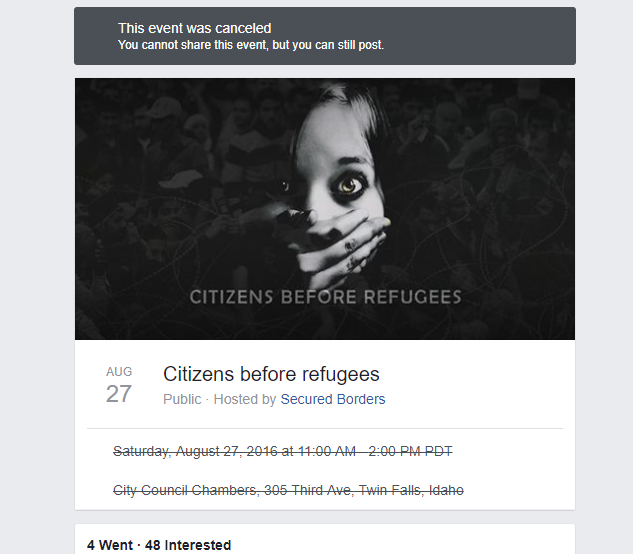 Without more details, a lot of this is inherently speculative—one could interpret this as a test for some kind of government op, or perhaps an attempt by the troll farm to pretend it had a real-life presence while it was hawking merchandise or linking slack-jawed yokels to profit-generating malware. But whatever was going on with this specific event, it seems to have been a very curious use of someone’s dollars, or rubles, or whatever. [The Daily Beast]