By Kate Conger on at

Apple announced today that its newest phone, the ten-year anniversary iPhone X (or iPhone Ten, if you prefer), will unlock using facial recognition—and people are already panicking about it. But it seems like Apple has anticipated a lot of the concerns and we might not need to freak out quite yet.

Facial recognition is just plain creepy, and Apple is going to have an uphill battle convincing consumers that they want to store a complex 3D map of their faces in their phones. After all, facial recognition unlocking has been available for years from Android, Samsung, and Windows but hasn’t gained serious market saturation. Faces feel personal in a way that makes us not want to turn them into passwords, and many facial recognition offerings have been susceptible to spoofing with selfies and masks.

In hanging back as other companies push out facial recognition products, Apple has followed the same strategy it has in the past—let competitors make mistakes in the early phases of a new technology, and then roll out its own superior version once it's seen all the ways the tech can go wrong.

Apple seems to have anticipated many of the concerns that are spreading across social media. Let’s break it down:

Is it going to be racist?

Major companies have fucked up facial recognition by not building it to function on all skin tones. Remember when Google Photos tagged pictures of black people as gorillas? Or when HP’s face-tracking webcams failed to recognise black people at all? These are the kinds of mistakes Apple absolutely has to avoid with Face ID.

We’ll have to wait and see how Face ID performs once it’s in the hands of consumers, but Apple has put in work to ensure it doesn’t end up in an #AppleSoWhite debacle. Face ID is powered by an infrared camera, proximity sensor, flood illuminator, ambient light sensor, and dot projector which work together to create a 3D map of the contours of your face. The system is designed to look at face shapes, even in low light, so hopefully it won’t make the same mistakes as its predecessors in the facial recognition field.

What if I get arrested?

Given the amount of personal information we keep on our phones, it’s no wonder that we’re uncomfortable with the idea of a cop rummaging through that data.

In America, concerns have arisen about what could happen if you get arrested and a cop holds your phone up to your face.

Fortunately, the Supreme Court decided this isn’t cool back in 2014. In Riley v. California, the justices unanimously ruled that police have to get a warrant if they want to search your phone from incident to arrest. So if they’re going to dig through your device, they’ll at least have to convince a judge that there’s a reason to do so.

Now this doesn’t mean that cops always follow the law—we know they don’t! If you’re using Touch ID, you might be forced to put your finger on your phone and unlock it, and the same holds true for Face ID.

If you’re worried about being arrested (and hey, you might be worried for non-criminal reasons, like participating in a protest), there’s a nice new feature in iOS 11 that lets you quickly disable Touch ID and we’re guessing it works for FaceID, too. You can also go into your settings under ‘Touch ID and Passcode’ and turn off biometric unlocking.

What if Apple does something shitty with my biometric data?

One of the things that makes facial recognition so creepy is the idea that your image will wind up in a database somewhere, being sold to advertisers or scoured by spy agencies.

Apple anticipated this concern with Touch ID and did a few things to make its storage of biometric data more palatable. For starters, your biometric data—whether its your fingerprint or your face—never leaves your device. Instead, it’s stored in an encrypted form in your phone’s Secure Enclave, where it can’t be accessed by your operating system or any of the apps running on your phone.

Furthermore, what’s stored in the Secure Enclave isn’t actually your fingerprint or a picture of your face. As Apple’s senior vice president of worldwide marketing Phil Schiller explained today during the keynote, Face ID uses your image and dot pattern to create a mathematical model of your face. That’s how Touch ID works, too, and that mathematical model can’t be reverse-engineered to reveal your actual fingerprint.

What if I’m taking a nap?

me after i sliced my mans face off so i can unlock his iphone x pic.twitter.com/84KUmLBjWB

Sometimes the person you want to keep out of your phone the most isn’t a cop or corporation, but your significant other. At Gizmodo, we don’t think there’s any shame in keeping some stuff private from whoever you’re dating.

With Touch ID, some users worried that their boo would sneak up on them while they were sleeping and use their finger to unlock their phone.

Face ID is supposed to improve on this by requiring “user attention.” Basically, this means you have to have your eyes open and make eye contact with your phone to get it to unlock. There may be ways around this—one of my Gizmodo coworkers asked what would happen if you peeled back your drunk buddy’s eyelids while he was passed out and pointed his phone at his face—but we’ll have to wait and see. Just don’t get hammered at our office and you should be safe. Apple’s Schiller also warned that Face ID could be fooled by your evil twin, so keep your phone away from that guy.

What if I look stupid using it?

When rumours started to swirl about Apple’s forthcoming announcement of Face ID, I figured the biggest threat to widespread adoption would be people worrying about looking dumb. I definitely don’t want to wave my phone around like I’m trying to catch a good selfie every time I need to check my text messages.

Fortunately, Apple appears to have gone for a more subtle approach. In the demo today, Apple showed that users will have to show all angles of their face during setup, so you should be able to glance down at your phone to unlock it rather than lining it up directly in front of your face like an idiot. 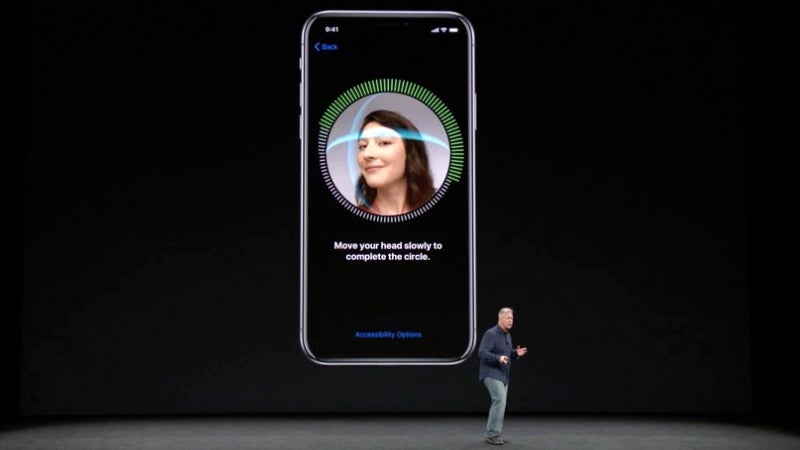 However, it’s not clear just how well this is going to work. FaceID failed on Apple’s senior vice president of software engineering Craig Federighi during an onstage demo, leaving him to type in his passcode, so we’ll see how the double-chin angle works for unlocking once iPhone X hits the market.

iPhones Compared: How the iPhone X Stacks Up Against iPhone 8 and 8 Plus

When Can You Get All the Shit Apple Announced?