Is This the Beginning of the End for Goop?

Around the turn of the 19th century, American entrepreneur Clark Stanley sold an allegedly healing “rattlesnake oil” out of his stage coach. Stanley marketed his product as a Western interpretation of some ideas he supposedly gathered from Eastern medicine, claiming the product could cure a whole host of illnesses. The problem was, a federal investigation revealed that not only did Stanley’s snake oil lack any medicinal value, it contained no actual oil from snakes. Two hundred years later, Gwyneth Paltrow’s lifestyle brand, Goop, is embracing the same dubious principles and selling it back to women as empowerment. And this time, the insufferable, unsubstantiated bullshit is a lot more dangerous.

Since it was founded in 2008, Goop has grown wider in its following and dug deeper into the trenches of its own absurdity. The New York Times reported that in June, Goop had 1.8 million unique American visitors to its website, according to analytics service comScore. In that same month, the company came under fire—first by Gizmodo, then by pretty much the entire internet—for promoting £95 “bio-frequency healing stickers” that erroneously claimed to use material found in NASA space suits. Goop and the sticker’s manufacturers both deleted their claims after getting fact-checked by current and former NASA employees, one of whom called it “a load of BS.”

After years of marketing its insufferable brand of “rich-white-lady-booking-a-trip-to-Bali-to-find-herself” quackery toward women, Goop is now coming under fire legally. Late last month, a watchdog organisation called Truth in Advertising (TINA) filed a formal complaint with the California Food Drug and Medical Device Task Force, calling for an investigation into 51 instances of allegedly deceptive advertising by Goop. After conducting its own investigation into the lifestyle brand, TINA concluded that Goop uses “unsubstantiated, and therefore deceptive, health and disease-treatment claims to market many of its products.”

One of the lawyers who filed the complaint, TINA executive director Bonnie Patten, said her organisation sent a letter to Goop and its attorneys before doing so. TINA hoped Goop would remove the health claims it makes about many of its products. According to TINA, Goop told the organisation that it took the matter seriously—but then proceeded to continually delay action, including taking down unsubstantiated medical claims from its site. That’s when Patten said TINA decided to move forward with the complaint.

“The examples we provided [in the complaint] are not iffy examples,” Patten told Gizmodo. “There is a claim on the Goop website that a crystal can treat infertility, and I just really feel like saying things like that is taking advantage of a vulnerable population with very serious health challenges and exploiting that for financial gain.”

When Gizmodo reached out to Goop for comment on the complaint, a spokesperson provided the following statement:

Goop is dedicated to introducing unique products and offerings and encouraging constructive conversation surrounding new ideas. We are receptive to feedback and consistently seek to improve the quality of the products and information referenced on our site. We responded promptly and in good faith to the initial outreach from representatives of TINA and hoped to engage with them to address their concerns. Unfortunately, they provided limited information and made threats under arbitrary deadlines which were not reasonable under the circumstances. Nevertheless, while we believe that TINA’s description of our interactions is misleading and their claims unsubstantiated and unfounded, we will continue to evaluate our products and our content and make those improvements that we believe are reasonable and necessary in the interests of our community of users.

A screen shot from Goop’s article on “The 8 Essential Crystals,” in which it claims Carnelian helps treat infertility and PMS symptoms. It does not.

A cursory look at almost any of Goop’s articles will reveal some seriously outlandish, unverified claims. It promotes aromatic sprays to treat depression and anxiety, and most infamously, jade eggs to increase vaginal tightness. Currently, the brand sells a pack of vitamins called High School Genes, which it says could benefit women suffering from Polycystic ovarian syndrome (PCOS). Since many women with PCOS struggle to lose weight due to their disease, Goop seizes the opportunity to sell them a product with an infantile name that suggests it can help get a woman back to her younger, presumably thinner physique. Of course, these supplements do not need to be approved by the FDA.

Goop has not held back in this latest round of controversy. Last week, Gwyneth Paltrow went on Sophia Amoroso’s #GIRLBOSS Radio and addressed her company’s critics by implying they were sexist and ignorant about her products.

“I wish that people would actually read the article or do their homework before they are vitriolic about it,” Paltrow said. “A lot times they’re not even addressing what’s on the website. [Especially because] we encourage discussion and we love the back and forth. And we love different points of view.”

It’s worth noting that after her appearance on #GIRLBOSS Radio, I started asking questions on Twitter about why Goop—and Paltrow—peddle pseudoscience. I was promptly blocked by the brand. So much for “loving the back and forth.” 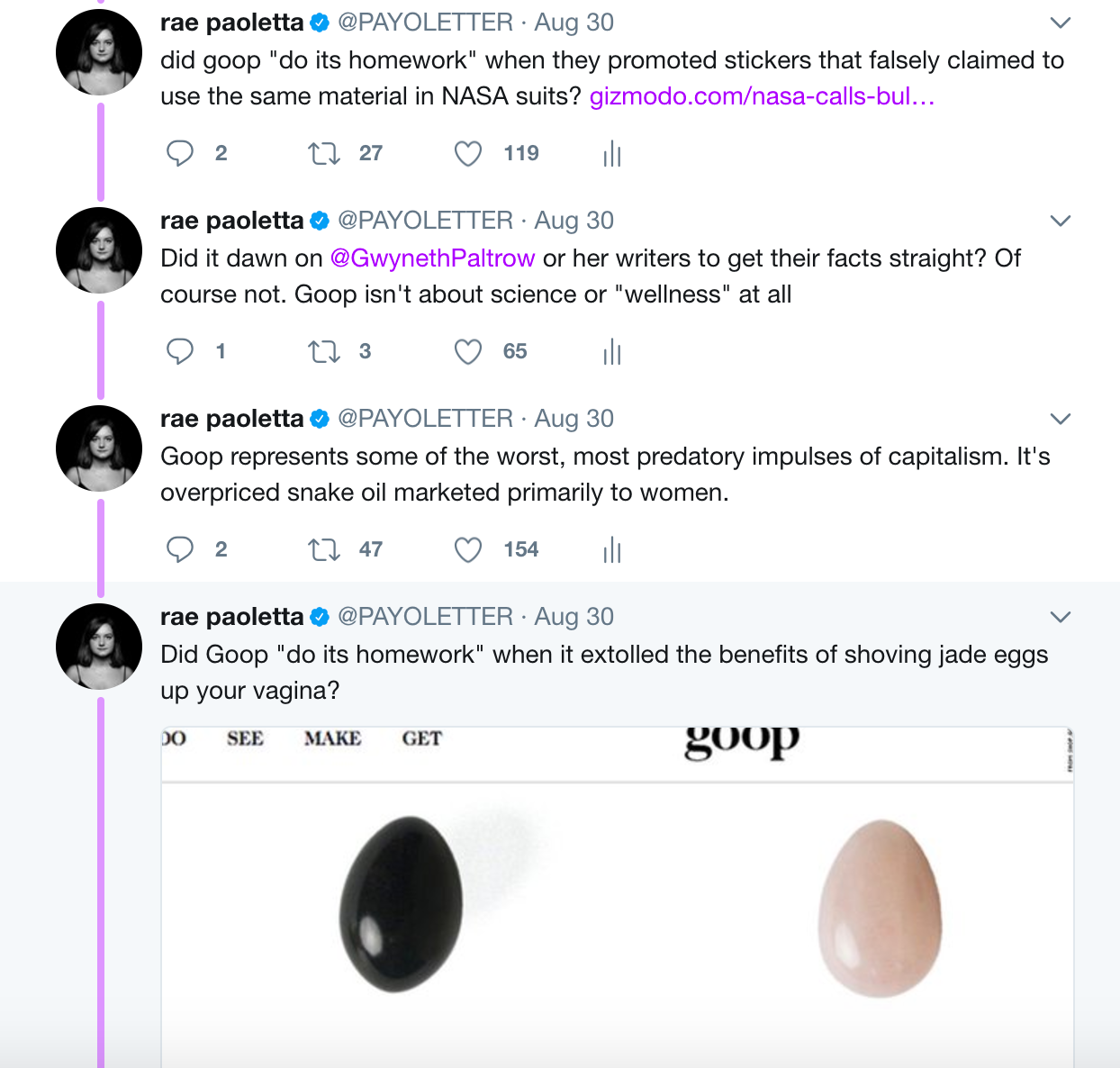 Image: Courtesy of me, unfortunately 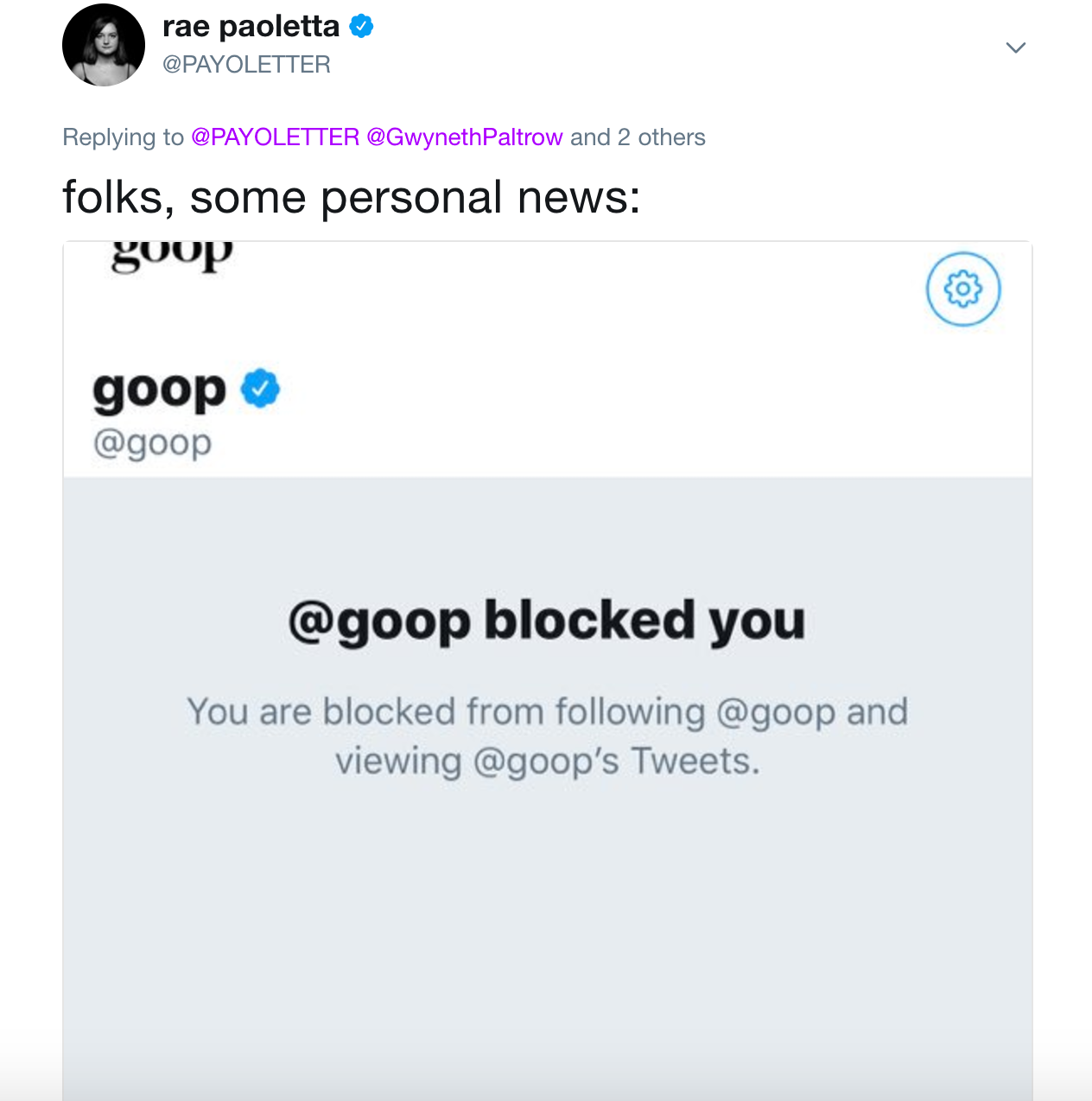 Image: Also courtesy of me

Goop has unintentionally dug its own grave. In addition to facing criticism for selling expensive snake oil, now, it can be admonished for being hypocritical, too. It’s also really pissed off folks who did their “homework”—in med school. Many doctors have publicly criticised Goop for unnecessarily stoking women’s health fears, particularly back in 2015, when the brand suggested women’s bras could be linked to breast cancer.

“That’s fucking bullshit and you can quote me on that,” she told Gizmodo.

Medical falsehoods aside, maybe the most disturbing thing about Goop is that it knows its audience, and how to manipulate it. Though it postures itself as a feminist, progressive lifestyle brand, Goop enforces the same insecurities traditional advertising tells women they should have: that their bodies are too fat, too old, and ultimately, undesirable.

“Paltrow and Goop are preying off the same insecurities that the patriarchy has put on women for centuries,” Gunter said, “like that your vagina smells or there’s something wrong with it.” Shoving a porous jade rock up your vagina—would, as Gunter previously noted to Gizmodo, could harbour all sorts of bacteria—is naturally what Goop suggests as a solution to this “problem.”

This latest complaint may be the beginning of the end for Goop, or it may not go anywhere at all. Hopefully, regardless of the outcome in court—if it even comes to that—will see Goop for exactly what it is: a bunch of empty promises in a SoulCycle t-shirt.

“There’s this idea [Goop] is branded or marketed as ‘empowerment’ or advocacy,” Gunter said. “My point—and many people’s point—is that you can’t be empowered with inaccurate information.”