Yesterday my coworker laid the DropMix board out on a table and started dropping cards. Immediately catchy music played from her phone’s speaker and three passing coworkers stopped dead in their tracks. As she removed a card and added another the music changed to accommodate the new beat and one person said, “Is that, like, a mixing game?” Then another spied the colourful box the DropMix resides in when you want to shove it in the closet or under a bed. “Harmonix? The Rock Band guys?” The final never took their eyes off the board as she replaced another card and the music changed again. “I want to buy this.”

DropMix is a collaboration between Harmonix, who created Rock Band and Guitar Hero before it, and Hasbro, who produces most of the board games you probably have tucked away on a shelf somewhere. When giant gaming consoles ruled the world, Guitar Hero and Rock Band’s oversized instrumental accessories fit right in. But now that mobile games occupy a big chunk of the gaming market, no one wants a living room full of guitars and drums, so DropMix lets you live out your rock star fantasies using a simple deck of cards. The game has a bit of a learning curve, but the killer, ever-evolving soundtrack you create makes it worth the effort.

I was first given a hush-hush demo of DropMix at Toy Fair 2017, earlier this year, and had a lot of fun creating mashups and mixes at the time. But looking back, having Harmonix and Hasbro reps guiding me through the gameplay was a big help. It’s not that DropMix is overly complicated to play, it’s more that the game introduces new technologies and concepts to a trump-style card game that most of us have never experienced before.

Instead of collecting Pokemon, you’re going to soon find yourself trying to hunt down DropMix cards of your favorite artists. (All images: Andrew Liszweski/Gizmodo)

There are two key components to DropMix. The first is a series of collectible cards that makes the game feel a little bit like Pokemon. But instead of featuring make-believe pocket monsters of varying abilities, the DropMix cards feature real artists, and parts of one of their popular songs. For example, the game includes the vocal track from Sia’s “Chandelier” on one card, multiple parts of Skrillex’s “Bangarang,” and even the trumpet for Cake’s “Short Skirt, Long Jacket.” 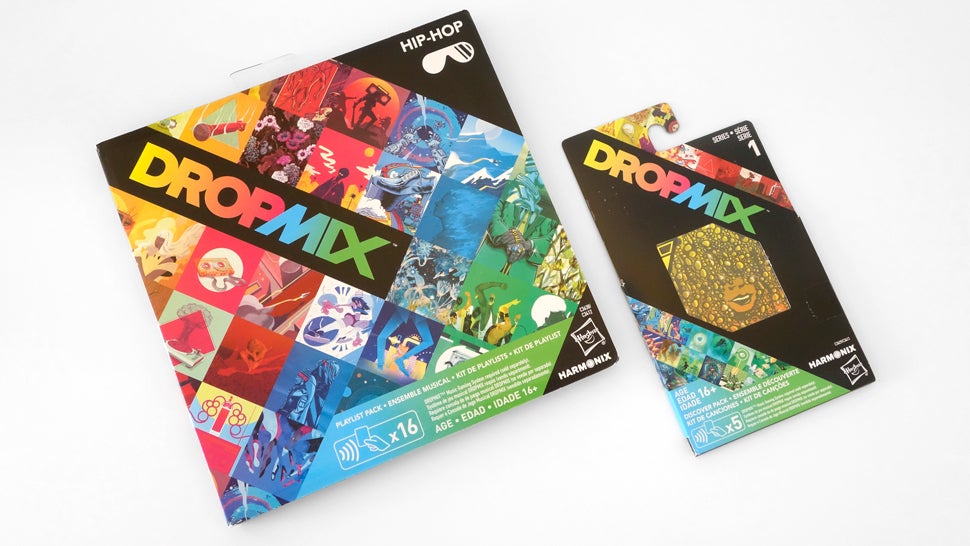 You can grow your DropMix card collection with expansion packs.

To add replay value to the game (and, let’s be honest here, to introduce a continuing revenue stream for Hasbro and Harmonix) your DropMix collection, which starts out with 60 cards in the $100 ( £77) base version of the game, can be expanded with add-on packs. At $15 ( £11.58) for 16 cards, or $5 ( £3.86) for a five-card mystery pack, they’re not cheap. (UK pricing and availability has yet to be announced.) But these also aren’t just paper cards printed with fancy designs. Each card has an embedded and all but invisible RFID chip inside encoded with details about the artist and track it features.

You’ll need an iOS or Android mobile device to play DropMix, but it helps keep the game compact and portable.

Which brings us to DropMix’s other major component, the game board. Powered by four AA batteries, it connects over Bluetooth to the game’s app which can be run on iOS or Android mobile devices. DropMix can’t be played without access to the app, but I like that it uses the mobile device you already have to help minimize the game board’s footprint when not being played. It also makes it easier to connect the game to a Bluetooth speaker which your mobile device is probably already paired with. 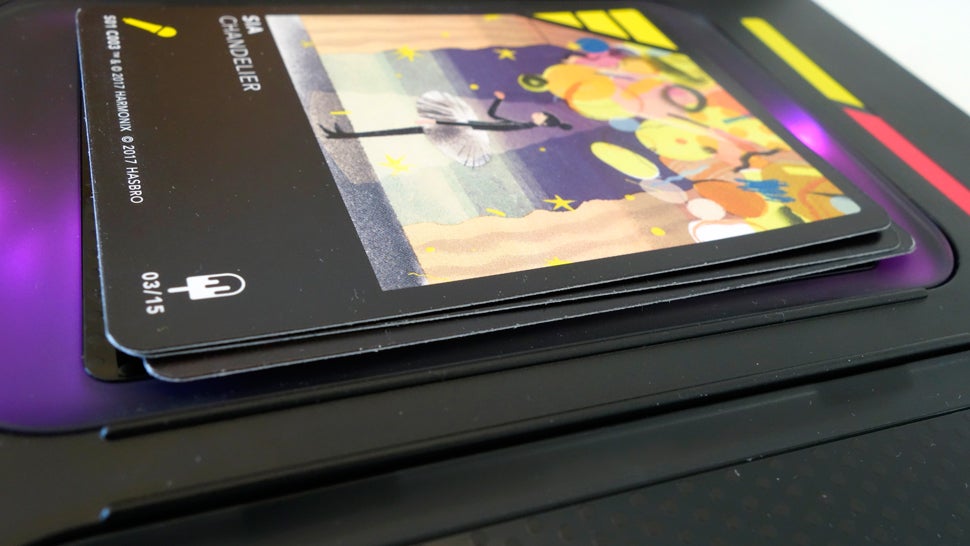 DropMix’s NFC sensors can read up to ten stacked cards at once.

In addition to Bluetooth, the DropMix board features five NFC readers that automatically detect the various cards as they’re placed on various slots, even if they’re stacked. The last, topmost card played is always the active one, but the board can keep track of up to ten stacked cards at once. It’s a technology that’s existed for years, and one that many of us probably use on a regular basis (Oyster cards, Apple Pay, etc.) but it somehow just feels like magic when applied to a card game.

There are currently three different ways to play DropMix, and they all more or less work on the same concept. As cards are placed on the five different slots by matching up colors, a portion of that artist’s song is introduced into a looped mix in real-time. The transitions are seamless as cards are added and removed from the board, and while some mixes sound better than others depending on your musical tastes, you’ll find yourself bobbing your head throughout an entire game no matter what’s playing.

There’s a Freestyle Mode that lets you just play around with your card collection like an aspiring DJ, creating random mixes you can quickly save by tapping an icon on the app, a Party Mode that has teams competing to be the best DJ by fulfilling musical requests from partygoers using their cards, and Clash Mode, which will probably be the one most people play.

In Clash Mode, two teams compete to not only build mixes, but to also score points by trumping their opponent’s cards based on each card’s power ranking. It can be best described as a mix between a trump-style card game and Uno, but with an ever-changing soundtrack. As new cards are played, that artist and their song start to dominate the mix, and points are scored by how many cards each team has on the board, in addition to countless other power-ups I’m still figuring out. It’s tremendous fun, but the ‘figuring out’ part is something we hope Harmonix and Hasbro address ahead of the game’s official release on 24 September.

Even with access to a reviewer’s guide that retail consumers will never see, I was a bit confused about how to set up teams at the beginning of Clash Mode, how to sort the cards (they need to be organised into stacks of ‘playlists’) and even how many card each player was supposed to be holding. A video Harmonix posted to YouTube three months ago ended up being an invaluable resource as we were working through the logistics of playing DropMix, but I’m hoping the ‘help’ section of the app addresses the basic gameplay mechanics a little more thoroughly once the game is released.

In addition to a killer soundtrack, there’s a lot of strategy that can be used while you play DropMix, which can be learned as you play the game again and again. It’s one of the most entertaining and original board games I’ve had the chance to play in recent years, and anyone with a love of music will quickly find themselves sucked in for hours, and then wishing their local Toys R Us was open in the middle of the night to find those expansion packs. [DropMix]