Since early last week, the Sun has belched out a steady stream of solar flares, including the most powerful burst recorded in the star’s current 11-year cycle. It sounds very alarming, but scientists say this is simply what stars do every now and then, and that there’s nothing to be concerned about.

Solar flares are powerful bursts of radiation that stream out into space after periods of sunspot-associated magnetic activity. Sunspots are surface features that occasional form owing to the strong magnetic field lines that come up from within the Sun and pierce through the solar surface. Solar flares are the largest explosive events in the Solar System, producing bright flashes that last anywhere from a few minutes to a few hours. Earth’s atmosphere protects us from most of their harmful rays, but this radiation can disturb GPS, radio, and communications signals, particularly near our planet’s polar regions. 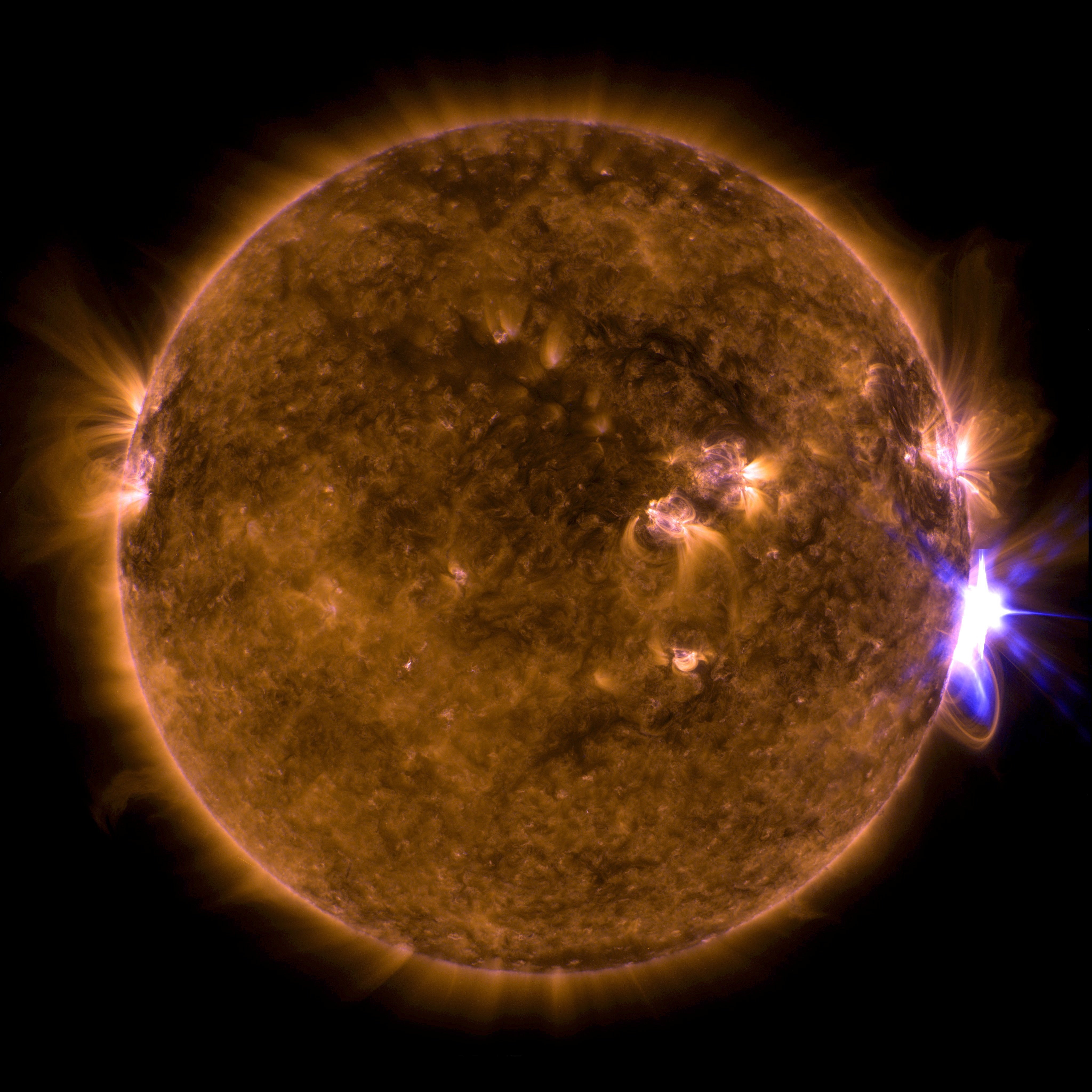 On Sunday 10 September 2017, NASA’s Solar Dynamics Observatory recorded an X8.2 class flare. Class X flares are the most intense flares, and the number attached to it denotes its strength, where X2 is twice as intense as X1, and X3 is three times as intense, and so on. M class flares are a tenth the size of X-class flares and C-class flares are the weakest of the bunch. Both X and M class flares can cause brief radio blackouts on Earth, and other mild technological disruptions. Unless it’s part of an unusually strong solar storm—the kind that happens about once every one hundred years—in which case that would be very bad.

The latest flare spurted out from the Sun’s Active Region 2673, which scientists first noticed on 29 August. Activity from this region began to intensify on 4 September. Over the past week, NASA has catalogued six sizeable flares, including X2.2 and X9.3 flares on 6 September, and an X1.3 flare on 7 September. The X9.3 flare is the largest flare recorded so far in the current solar cycle—an approximately 11-year cycle in which the Sun’s activity waxes and wanes. We’re in the ninth year of the current cycle, and we’re heading towards a solar minimum in terms of intensity. Flares like this are rare during this waning phase, but as these latest bursts show, they can still be pretty intense.

“Big flares towards the end of sunspot cycles are not unusual, and in fact, that’s fairly standard behaviour,” said Scott Macintosh, director of the High Altitude Observatory at the National Center for Atmospheric research (NCAR), in an interview with Gizmodo. “The trick is to explain why.”

Macintosh says that when the Sun’s activity gets low, the magnetic systems underlying the spots appear to be in close contact near the equator. This creates an opportunity for the Sun to produce “hybrid” sunspots—regions which contain magnetic fields that twist like water in the Northern and Southern hemisphere oceans.

“Remember how the rotation of the Earth makes water [spin] in different directions in each hemisphere? The Sun does the same thing for the same reason—the Coriolis force,” said Mcintosh. “Those systems are very unstable. Typically these types of spots produce the biggest, baddest flares and coronal mass ejections when they emerge through the Sun’s surface.”

But the paradoxical thing, says Mcintosh, is that the periods of very low solar activity are known to have produced the biggest geomagnetic storms in history, and these late-cycle events can persist for a very long time, even though the total number of flares is low. “It’s basically about how the different magnetic systems interact,” he says.

As a result of the most recent solar flares, the Space Weather Prediction Center has issued a moderate geomagnetic storm watch for today, and a minor geomagnetic storm watch for 14 September. This shouldn’t cause too much of a problem on Earth, but as NASA Solar Scientist Mitzi Adams explained to Gizmodo, we need to be concerned about flares and coronal mass ejections, since we’re now so reliant on technology that can be impacted by these events.

“The Space Weather Prediction Center (SWPC) shows an image from SOHO’s coronagraph with ‘speckles.’ The speckles are energetic charged particles interacting with the camera, which do degrade the camera over time,” said Adams. “These events also cause radio blackouts, corrosion in pipelines, and ground-induced currents that can damage transformers. Through monitoring and basic research, the goal is to understand what the Sun does and is likely to do so that we can prepare satellites, power grids, and even astronauts.”

The particles that speckle our cameras, says Adams, arrive about an hour after traveling about 93,000,000 miles per hour (150,000,000 km/h) from the Sun to the Earth. But the bulk of the particles take a couple of days to reach our planet, giving us some time to prepare. [NASA/Goddard, Space Weather Prediction Center]

Cassini's Last Look at Titan Is Breathtaking and Bittersweet

The UK Launched a Little Rocket Not Very High